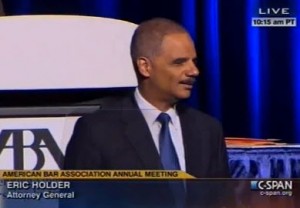 Attorney General Eric Holder announced today that low-level, nonviolent drug offenders with no ties to gangs or large-scale drug organizations will no longer be charged with offenses that impose severe mandatory sentences. He directed his 94 U.S. attorneys to act accordingly.  This decision and Holder’s upcoming call for legislative changes following his plan should actually gain bi-partisan support.  I personally have little respect for Holder, but on this decision, I tip my hat.

For those that don’t know, back in the ‘80s, Congress (and many States) enacted mandatory minimum sentences for drug crimes, a result of the [failed] “War on Drugs”.  Mandatory minimums are harsh automatic prison terms that lawmakers assumed would be a quick fix and deterrent.  Coupled were federal and state Sentencing Guidelines, more power was given to prosecutors and little to no discretion given to the judges.  A judge could not individualize sentencing, even for a first time, non-violent offender.  No rehab, no in/out-patient treatment, no discretion based on the facts of the case, their roll, etc.

The result—10s of thousands of first-time non-violent offenders sentenced to 10 or 20 years and up to life without parole; over 40% overcrowding in prisons and an unfathomable taxpayer burden (approximately $28K per inmate, per year).

Over the years, organizations such as FAMM (Families Against Mandatory Minimums) along with Federal and State Judges, over 50 of the 94 U.S. Attorneys, Professors from Harvard and a myriad of supporters such as Grover Norquist, David Keene, Pat Nolan, Ed Meese and Pat Robertson have called for the repeal/review of mandatory minimums.  Reform has also been supported by Presidents George W. Bush, Bill Clinton, George H.W. Bush and Supreme Court Justices Anthony Kennedy, William Rehnquist and Stephen Breyer.  The list is vast http://www.famm.org/aboutsentencing/WhattheExpertsSay.aspx

The new Justice Department policy is part of a comprehensive prison reform package that Holder unveiled in a speech today to the American Bar Association in San Francisco. He also introduced a policy to reduce sentences for elderly, nonviolent inmates and find alternatives to prison for nonviolent criminals.

“We must face the reality that, as it stands, our system is, in too many ways, broken,” Holder said. “And with an outsized, unnecessarily large prison population, we need to ensure that incarceration is used to punish, to deter and to rehabilitate — not merely to warehouse and to forget.”

“A vicious cycle of poverty, criminality and incarceration traps too many Americans and weakens too many communities,” Holder said today.  He added that “many aspects of our criminal justice system may actually exacerbate these problems rather than alleviate them.”

It is clear that “too many Americans go to too many prisons for far too long and for no truly good law enforcement reason,” Holder said. “We cannot simply prosecute or incarcerate our way to becoming a safer nation,” he added later in the speech.

Over the next weeks, Holder and his deputies plan to visit cities to promote their prison agenda and point to examples of the type of change the attorney general is advocating.

New legislation in Kentucky, for example, has reserved prison beds for only the most serious criminals, focusing resources instead on supervision and other alternatives. The state is projected to reduce its prison population by more than 3,000 over the next 10 years, saving more than $400 million, according to Justice Department officials.

“Such legislation will ultimately save our country billions of dollars,” Holder said today. “Although incarceration has a role to play in our justice system, widespread incarceration at the federal, state and local levels is both ineffective and unsustainable.”

Reforming mandatory minimums is an issue that Sen. Rand Paul (R-Ky.) has been pushing (no pun intended) for a while now — including during an appearance at historically black Howard University earlier this year.  In a statement today, Paul said, “I look forward to working with them to advance my bipartisan legislation, the Justice Safety Valve Act, to permanently restore justice and preserve judicial discretion in federal cases. … The Administration’s involvement in this bipartisan issue is a welcome development. Now the hard work begins to change the law to permanently address this injustice.”

As Aaron Black for the Washington Post writes, If Paul can work with these senators and the administration to get something done on mandatory minimum sentences, he can credibly claim that he took the lead on a major issue and got something bipartisan done — without the same potential for blow-back produced by the effort of Sen. Marco Rubio (R-Fla.) to reform immigration laws, for instance.

This should be a big win for those currently effected by mandatory minimums, Paul and taxpayers.