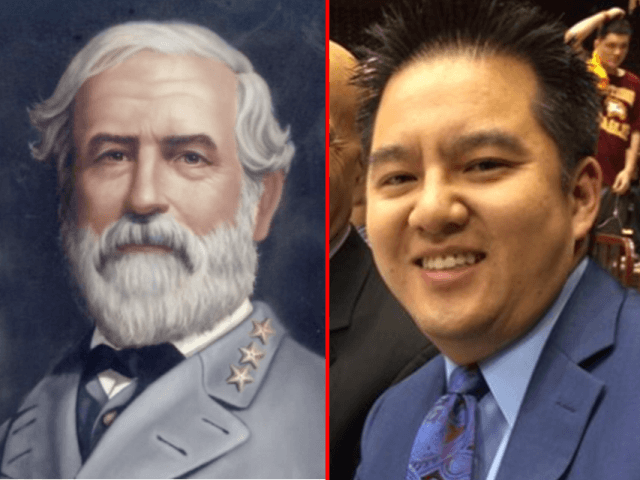 These two are NOT the same (credit: Bob Price)

ESPN has pulled Asian-American commentator Robert Lee from announcing UVA football games because his name might offend some viewers following the events in Charlottesville.  This Asian announcer has absolutely nothing to do the with the Confederate General Robert E. Lee.  No matter, ESPN is catering to the idiots who might confuse the two men who share the same name.  ESPN said:

We collectively made the decision with Robert to switch games as the tragic events in Charlottesville were unfolding, simply because of the coincidence of his name. In that moment it felt right to all parties. It’s a shame that this is even a topic of conversation and we regret that who calls play by play for a football game has become an issue.”

You can’t make this stuff up.  It’s become an issue because of ESPN’s actions!

But wait, some football fans may still have a chance to be offended on September 2nd when Virginia plays William and Mary who are called ‘The Tribe’. That can’t be good for the special snowflakes who are so easily offended.

ESPN pulls UVA football announcer because his name could be ‘offensive’ to some viewers was last modified: August 23rd, 2017 by Jeanine Martin

The solution to this problem is simple.

Everyone with the last name Lee, Jackson, Stuart, Forrest, etc. should be forced to legally change it.

As a society, we simply cannot tolerate people with passively racist last names.

This country has gone full retard.

What makes this a counterfeit and offensive article to me? The author fails to tell the masses that the way to stop this type of media behavior BS is for people to blackball the advertisers of that game and espn.

Those who fail to propagate a message with “the cure” to the long term media cancer growing in America are they themselves just as big a problem as what they write about. You bring attention to this game with your words which increases viewership and ratings for espn. Thus you increase espn’s profit. Quit being a fox in sheep’s clothing.

Boycott the advertisers of espn. Cut the head off the snake. This article does nothing but enriched espn.

Please, Jim…start making sense at some point. Above, you call Mike Giere part of a liberal army for saying Obama set back race relations. Here you say Jeanine’s post is “counterfeit and offensive” and that it will increase ESPN’s profits (?!??). What’s next? Are we being paid by Ed Gillespie to write this? Maybe by the power company?!?

You sound just like those who condemned Noah for building the Ark. But, if one does not believe in the Bible that doesn’t mean much.

Any media attention, good or bad, about that game or espn increases their brand. This gets people to watch more stupid commercials thus increasing ratings which increases profit. Why are you trying to shutter the facts?

The left are now attacking the past by attacking statues, and so is Mike by attacking Obama. Trump is Mike’s guy. Why can’t Mike write about his guy, Steve?

Yes, OK, Jim…you’re JUST LIKE Noah. Not delusional at all. Fine.

Naw, but read this;

I’m not quite finished with you yet Mr. Albertson. Your Republican Party has once again jumped into the sack with the Democrats regarding Charlottesville.

The media focus is still riveted to Charlottesville and the 2 dead. But what about this past weekend violence in Chicago? Where is the media?

My question Steve, why are you and your left wing buddies not talking about the 9 killed and 54 wounded in another “land of the left” named Chicago just this past weekend alone? Why are the left wing “righteous” thugs that decended on Charlottesville not decending on Chicago to interdict in the hometown violence there? Not one one word by the crooked media about Chicago. Not one word.

But surely the murders in Chicago had to have been committed by white (privileged) males! No one else is capable of hatred.

Let one white guy flick his finger toward the inhabitants of Chicago and suddenly all the cameras will be in Chicago filming every grievance. But we won’t see even a moment’s coverage until they can hold a white man responsible.

The purge has not gone far enough. Charlottesville should remove Lee from the telephone dirctories, ban services to any Lee, make sure that LE-ster Holt is removed from the NBC anchor chair, and, to be consistent, remove anyone or anything with the name “lynch”. Beleeve!????? ??? ???

Maybe they can get Dick Black to fill in.

Or vis versa to make sure neanderthals get the joke. Hey, I got an idea. Bring in Kaepernick to do the color commentating.

In related news Regal Entertainment Group announced that Bruce Lee movies will no longer be shown in Charlottesville lest the snowflake community suspect that distant Chinese relatives of the Confederate General are infiltrating the area. Local radio stations have agreed to stop playing all songs by Ten Years After since Alvin Lee was the lead guitarist. When told that both Bruce Lee and Alvin Lee were dead Mayor Singer replied, “You can never be too careful with white supremacists.” Copies of “To Kill a Mockingbird” will be burned since the book was written by Harper Lee. Spike Lee movies will be banned from cable TV in Charlottesville, Finally, former standout UVA basketball player Lee Raker has been asked to avoid Charlottesville until such time as he legally changes his first name.

Have also heard Liberals will be boycotting Lee Jeans. They are too tight and cut off circulation to their brains.

Hilarious! We are literally laughing out loud.

What’s offensive is that they pulled him because of his name. That’s not helpful. It compounds the problem. But of course…maybe that’s the point.

ESPN has once again shown us that they think politically rather from a sports oriented viewpoint.

They made the decision “together with the employee”?? I’m certain that the employee had to either agree with his demotion or agree to be fired. ESPN isn’t exactly known for being non-political.

It is Disney, my friend. It is pure entertainment.

I fear we are in more trouble than we realize. Stupidity and Fear have succumbed to Tyranny.

No, actually thank you Barack H. Obama, who set back race relations forty years. My great fear is that once this type of insanity sets in rational people begin to process it as normal.

Stupidity and fear succumbing to tyranny is a pretty accurate description of the trump campaign strategy.

You can say anything about Obama you want, but one thing Obama is not, is president of the UnUnited States. You want people to process as normal the continued attacks on past. Just as the rest of the liberal army you belong to wants to attack the antique statues of the past.

Mean, Trump is currently practicing insanity by doing the same thing over and over again and expecting a different result. This would be regarding his Afghanistan policy.

Seriously? You are not a leader. This is the editorial decision of a sports network.

You are trying to be ironoc but actually… yes, thank you Trump because these pea-brained petty tyrants literally lose their minds at the thought of you and reveal who they really are.

“Trump” is merely an excuse, and no substitute for people taking personal responsibility for their own education and resistance to propaganda. Sometimes, you just can’t fix stupid.

Nobody discredits ESPN better than they do themselves.