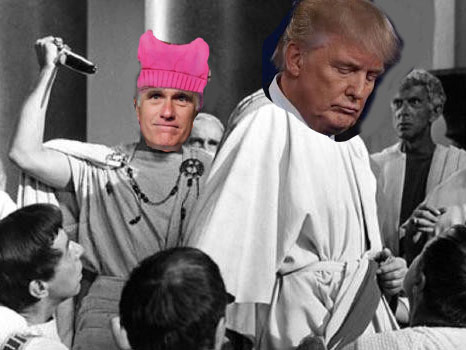 With his New Year’s Day “Washington Post” diatribe against President Trump – which was totally unprovoked and printed before he was even sworn in to be Utah’s next Senator —  Mitt Romney has positioned himself as a potential challenger for the 2020 GOP presidential nomination.

My fears of Romney getting elected to the Senate to replace retiring Orrin Hatch have come true.  I knew Romney was going to become a major thorn in Trump’s side, but never thought he would stoop so low to issue this kind of rebuke even before taking office!  In other words, he is already running for president before making an attempt to represent the people of Utah as their junior senator.

Yes, despite his big ego and high-mindedness, Romney is the junior senator under Mike Lee.

In addition, I was dismayed the president endorsed him in his primary instead of working to keep him out of the Senate altogether.  Perhaps Trump felt this would mend fences. Trump courted Romney for a position in his administration shortly after the 2016 election, and thankfully, did not bring him in.

So, like Brutus stabbing Caesar in the back in the Roman Senate, this is how Romney pays Trump back – with a long winded, grandstanding rebuke of the President’s character, without once mentioning any of his accomplishments or that of the GOP Congress.

I will not do a blow-by-blow rebuttal, as John Massoud took care of that on these pages the other day, except this part struck me funny —  “The president should unite us and inspire us to follow ‘our better angels’.”

Mitt – since you have so much money, why not give some to help the real group called “Better Angels,” which is doing more to create dialog between Reds and Blues than you ever did?  Here’s a link: https://www.better-angels.org/

In addition, Romney notes he did not support Trump for the nomination, but Romney never endorsed any of his opponents either, which is just so atypical of an Establishment Republican not willing to put his name and energy behind a candidate so he can “be above the fray,” I suppose.

I personally never supported Romney when he ran in 2008, nor in 2012 during the primaries,  but when he became the GOP nominee in 2012 I helped organize the polls in Leesburg and appeared at a rally for him.

His 2012 campaign was a disaster, and he still has not come to understand why a fellow billionaire with no political elected experience, Trump, could win the presidency in 2016.

His “Post” tirade resembles typical the inside-the-Beltway, CNN, MSDNC, professional class snobbery about Trump;  in other words, what we need to do is judge politicians on how they present themselves vs. what they actually do for us.  No thanks, Mitt, I am not interested in those kind of “leaders,” nor electing more false idols like Obama.

No doubt, Trump’s demeanor and bluster are a serious problem for him, along with the turnover, chaos, tweets and tinge of scandal.  I, too, am concerned, as are a lot of his longtime supporters.

But it doesn’t serve anyone but Mitt Romney any good by taking a backstabbing swipe at Trump this early in the year.

Republicans ranging from Rand Paul, who has not supported the President on a number of issues, and actually challenged him for the 2016 nomination while Romney made arrogant anti-Trump speeches, and Romney’s own niece, Ronna Romney McDaniel, the RNC Chairperson,. have rebuked him for these comments

I think Romney is a has-been and perhaps he should take his money and run with Mike Bloomberg as an independent slate.  Fine, go run against Trump. Bring it on.