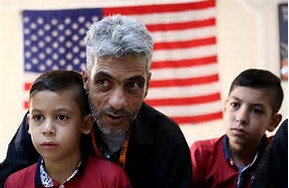 Evangelical Push Back on Refugees

On Wednesday, one hundred well-known Evangelicals and church leaders signed an ‘open letter’ advertisement* in the Washington Post, opposing the temporary moratorium on new refugees ordered by President Trump.

The rationale for the ‘open letter’ was clear;

[Our objection to the moratorium] is rooted in the call of Jesus to “love our neighbor as ourselves.” In the story of the Good Samaritan (Luke 10:25-37) Jesus makes it clear that our “neighbor” includes the stranger and anyone fleeing persecution and violence, regardless of their faith and country.”

The ‘open letter’ raises two questions. One, does the statement accurately apply the meaning of Jesus’ words, and secondly, is it applicable in this specific national circumstance?

First, you will recall that Jesus was answering a question from an “expert in the [Jewish] law” about how he could obtain eternal life. After receiving the answer, the lawyer tried to “justify” himself in an exchange with Jesus, asking,  “Who is my neighbor?”

Jesus answered with a story: A traveling Samaritan (with whom Jews would not associate) found a traveler on the road to Jericho who had been stripped, beaten and left for dead. Two other travelers, both religious Jews, had already walked past, ignoring the man. But the Samaritan stopped and gave him aid, bandaged him, put him on his own donkey and took him to an innkeeper, whom he paid to care for the man.

Jesus’ story forced the “expert” to admit that of the three, only the Samaritan was a “neighbor” to the beaten man, because he had mercy on him.

Some, especially in the early church, have suggested that Jesus was giving an allegorical story of the fall and redemption of man and others have detailed layers of deep meaning. Perhaps all are true in part. But the Lord of Creation is always practical, and this is also a practical lesson.

A lone traveler was mugged on a desolate road by bandits. One man understood mercy and took action.

God clearly takes the care of His children very seriously. Professing Christians must be concerned for the poor, the weak, the lost, and the wayfarer using their own gifts – in this case the Samaritan his donkey.

Jesus is telling us in this parable that the condition of our own heart is more important than even the condition of the world. Our love for others isn’t a collective emotion earned through others, but a singular response to His love hardwired in us.

This ‘open letter’ also adds qualifiers to the story that do not exist and changes the scope of the parable; this traveler wasn’t a refugee “fleeing persecution and violence, regardless of [his] faith and country.”

Which leaves us with the second question; is the ‘open letter’ and its stated rationale even applicable in this specific national circumstance?

One thing is certain. Jesus does not in this parable, nor elsewhere, instruct us to compel others to do the things we are individually told to do.

This doesn’t suggest Christians shouldn’t try to inform public policy using Biblical values – they should. However, it does mean that Christians must always remember that a fallen world will never be a fair world.

Perhaps the signatories of this advertisement would have better served Evangelicals by engaging them in a more substantial conversation about the issues surrounding refugees, and a faithful response to them.

Todd Wagner, Senior Pastor of the Watermark Community Church in Dallas, one of the nation’s leading Bible churches, wrote in the Dallas Morning News, that, “the choice between justice and love is a false choice.”

“Kindness,” he writes, “is never at odds with justice…It is imperative that we understand that God has ordained both government and the Church as divine institutions, each charged with separate tasks to bring order and goodness to all people.”

Dr. Brian Mattson, Senior Scholar at the Center For Cultural Leadership, puts it this way: “[Christians] need Romans 12 hearts with Romans 13 minds. The former prescribes our character: mercy, compassion, blessing, [food and water even for our enemies]…The latter mandates that civil government discriminate between those who do good and those who do evil. This surely includes protecting citizens from terrorists.”

One does not replace the other.

However, listening to the rhetoric of many refugee advocates, you would assume that Christians – and the Western democracies – have a moral duty to erase borders, allow unrestricted entry regardless of any cost, including the loss of life and property – and without regard to the host’s own moral or religious traditions.

There is also a distinct lack of genuine empathy in this argument for those everyday citizens who must live with the results of the current refugee policies. They pay the increased tax burdens; their towns, communities and schools in some cases are up-ended by people ill-prepared or unwilling to assimilate to a new life; and it is their values and customs that are often under assault.

Other Evangelicals question if the ‘open letter’ is really “compassionate.” Luke Moon, Deputy Director of the Philos Project, a Christian non-profit organization encouraging engagement in the Middle East is quoted in an article by Chelsen Vicari posted on the Institute for Religion and Democracy’s blog site; “For years, numerous organizations including the one I work for have been advocating for safe havens where ethnic and religious minorities would be safe from the ongoing sectarian wars.”

Moon adds, “Truly loving refugee’s means defending them where they are. Not using them as political pawns.”

Finally, is a moratorium on refugees really the critical priority of today’s Evangelical church?

With an estimated 7,100 Christian martyrs in 2016, tens of millions who live under unimaginable threat from their own governments, or persecuted, one would think there were more important issues at hand – not to mention the most important one; proclaiming the only Hope of the World.

*[World Relief based in Baltimore, MD, sponsored the advertisement. It is one of the largest refugee contractors in the U.S. and is paid by the U.S. Government to assist in placing refugees.]