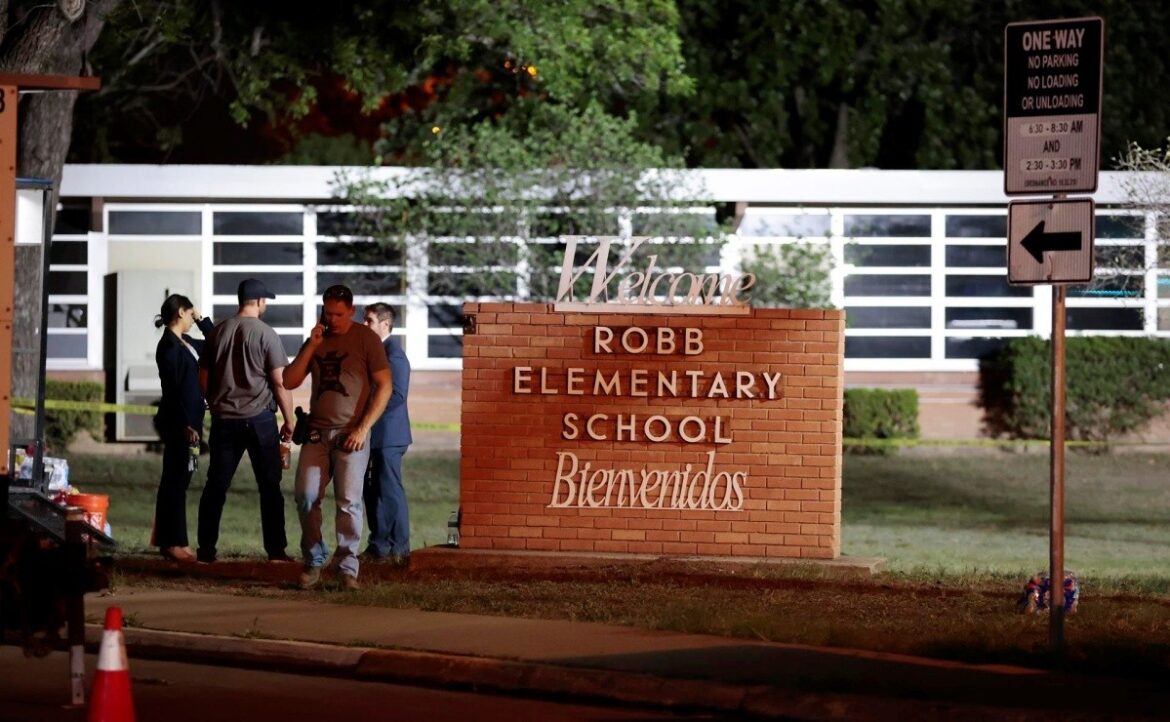 “It seems that the truth is that if you did understand the motivations of these vicious killers, then you would be as evil as they were.”

It is a horrifying and heart-tearing time, again. An eighteen-year-old killer murdered at least nineteen precious elementary-age children and two adults in Uvalde, Texas yesterday.

A score dead, each a hand-crafted child of God; connected to so many others whom they loved and who loved them; each a priceless soul with a unique purpose and hope for tomorrow.

One person made a decision that took all that away in a moment and, for the wounded, doubtlessly left some with physical and emotional damage that may last a lifetime.

Through the various organs and filters of the media, the culture is once again attempting to explain a single incident of mass murder. It is raw and shocking in its scope and suddenness – random and terrifying. What made this man believe that children he didn’t even know deserved to die?

The media beguiles us and captures our emotions in a way that the murder of one innocent person can’t, or the five people murdered on the streets of Chicago this past weekend alone can’t, or tens of thousands of nameless citizens murdered by their own governments across the planet this past year can’t, or the uncountable thousands dead at the hand of Islamic radicals, or Chinese communists this year can’t.

If you don’t believe in Evil, you have to invent reasons.

So we have mobs of psychologists, psychiatrists, sociologists, and every manner of professional academics, and of course, our simple-minded and corrupt political class, noodling out loud about “what would drive a man to do this,” as though that can be known through some scientific matrix given enough time.

Yet, inevitably history shows that as the years pass and we go back and look at the trials and evidence, we never know more about the Hommes’, Haris’, Klebold’s, and Lanza’s, and the rest of the mass killers than we knew the day they knelt to Evil and did its bidding.

Even with the Islamic mass murderers, the Mateen’s, Hasan’s, and Farook-Malik’s, while we know for whom they claimed to be killing, in the end it was Evil, too, that stage managed the events. Just to kill.

It seems that the truth is that if you did understand the motivations of these vicious killers, then you would be as Evil as they were. They are unknowable except through the lens of Evil.

None of this is new. Every recorded epoch of mankind is violent, and ours is no less so. In just the last hundred years, perhaps one hundred million people were killed by their own governments through starvation, firing squads, forced marches, gulags, torture, and hacking to death. Lenin, Stalin, Hitler, Tojo, Mao, Pol Pot, Castro, and the list goes on and on. It was less than thirty years ago that Rwanda fell into ethnic genocide. In less than four months, 800,000 Rwandans were slaughtered, mostly with machetes, not guns.

Evil uses whatever implement is convenient. Just to kill.

Theologians and philosophers have been writing about the problem of Evil for thousands of years, of course, dissecting its origins, nature, or even if it exists.

For this observer, it isn’t very complicated. We don’t have to look any further than the words of Jesus Christ, who confirmed for us that the human family is fallen, and since Cain killed Abel, the pattern is clear. Evil uses human vessels to travel into the history of men, to place them in spiritual slavery unless they turn to a Righteous God and His ways.

Jesus frequently challenged the religious and legal authorities of his day over the nature of Evil – that they clung to in their natures. When they wanted to kill Jesus, He explained to them that they didn’t “know” Him, because,

“You belong to your father, the devil, and you want to carry out your father’s desire. He [the devil] was a murderer from the beginning, not holding to the truth, for there is no truth in him. When [the devil] lies he speaks his native language, for he is a liar and the father of lies.” (John 8:44.)

His blunt truth spoken to the Jewish leaders two thousand years ago still ring down through the ages; we live in a binary world. You serve one or the other.

When men forget the Laws etched in the hard stone and mock righteousness, then succeeding generations become increasingly unrestrained because they no longer understand how to read the moral compass of their Designer.

It is interesting to note that in the post-Judeo-Christian era that has darkened the West generally and the U.S. increasingly, each tragedy and the ensuing chaos brings not more clarity about the nature of our crisis but merely ever mounting calls for striping innocent people of their rights and privileges in a free society while ignoring the role of virtue and the education of our young.

We don’t talk about recapturing the righteousness of our founding and our civic compact or the promises that “it will go well with us” if we return to the Righteous covenant that God provided. Instead, for two generations, we have ripped every reference to God and the Ten Commandments from our schools and public discourse as quickly as possible, and the radicals want still more gone. The goal is an amoral population. It can’t go well for us.

Having removed the Truth, we are left only with lies. Then the best among us become capable of the worst about us. And we grow monsters in our midst.

Evil Kills in Texas was last modified: May 25th, 2022 by Michael Giere

But at nowhere near the rate that guns kill in the US, Doc.

Well, you are on a roll today. Another untruth.

And you are wrong… yet again… we have the 4th highest murder rate in the world. None of those countries cited above are above us.

Likely it’s the whole package. Born with some minor physical or mental deficiency, bullied and made fun of by the other children because of it. Parents who argue all the time, drugs and booze in the home, 24/7, 365, sex and violence on TV. No religion in the home. No results driven health care, nothing but greed based crooks for doctors. But, you want real evil, it’s inside the beltway. We cannot fix anything with our totally evil, corruption and greed based government. Nothing, everything is now backwards.

As for the initial quote: ”It seems that the truth is that if you did understand the motivations of these vicious killers, then you would be as evil as they were.”
I agree in terms of gut-level understanding. It is very hard to imagine why anyone would do such a thing.

However, as a psychologist and a Christian who studies the scriptures, we have lots of hints regarding their motivations. They have no fear of God and often no strong sense of right and wrong, and they are very angry toward everyone and toward the world in general. They have been abused by life… and may have genetic mental deformities. Of course, there is no excuse whatsoever. In order to cross the line from mental illness to spiritual evil, they need some satanic help.

Michael is very helpful in reminding us of the origin of evil. And God in His word tells us the motivation for evil…it is the motivation of Satan himself. He is a liar and a murderer, and he knows his time is short. Satan hates God and human beings (who are created in God’s image) and especially he hates and wants to destroy Christians and Jews. Satan knows his eternal destiny in the Lake of Fire and wants to take as many human beings with him as he can. Likewise, this mass murderer wanted to take as many with him to death as he could.

The devil knows how Jesus feels about children, and what can hurt the Lord worse than a mass murder of monstrous proportions toward children? So as his perpetrators, the devil picks vulnerable people with serious mental illness, and he oppresses them (if not actually possessing them). But these children will not be found anywhere near Satan in the eternal situation. Trust me. Like at the Cross, the devil cannot actually win.

“Instead, for two generations, we have ripped every reference to God and the Ten Commandments from our schools and public discourse as quickly as possible, and the radicals want still more gone. The goal is an amoral population. It can’t go well for us.”

Secular is not amoral. In many ways quite the opposite… see the recent SBC sexual abuse report for just one example…

Secular has no standards of conduct. Every moral concept you espouse can trace its history to Christian principles. I defy people like you to name a single secular concept that is devoid of Christian teachings. You might want to remember that Jesus was a practicing Jew and thus advocated the Ten Commandments.

“I defy people like you to name a single secular concept that is devoid of Christian teachings.”

You might want to look up the Legislation of Drakon…

you are very lucky that you live under the benign laws of christianity. apparently, if you had your way draconian law would apply. if that is your anti christian secular example it is no wonder you are warped. however, my point is still relevant. you have created no secular law that isn’t buttressed by a christian foundation which is the basis for the constitution. unfortunately, you are trying to tear down the foundation and realistically have nothing but slavery to replace it.

None of our laws were created from religion. They originated from ancient secular civilization not Christianity. The hubris of the right is astounding.

blood on your hands

It is time to get rid of this idiot. the author has no blood on his hands.

The latest political bumper sticker of the left. He is no different than Obama, Beto, Biden, Kamala, etc. who have nothing to offer but politically dancing on the graves of children whether murdered or aborted.

all who have thwarted legislation have blood on their hands

Members of the party of nine month abortions and unfettered human sex trafficking at the southern border don’t get to pretend they are concerned for children when a few get shot.

One of their brightest stars, Cuomo, just got away with mass murder. He put known COVID patients into retirement and nursing homes. Abortion, euthanasia, mass murder are all positive in the minds of the left.

oh good God, where are you getting THAT crap from?