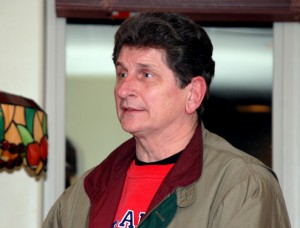 The Bull Elephant was the first to investigate and expose the truth about Gear’s blatantly false assault on Fred Gruber’s character. As set forth in Gruber’s complaint, filed with the Spotsylvania Circuit Court on Wednesday, Gear sent out an email to thousands of Republican activists (and previous Republican convention delegates) and posted on his website assertions that Gruber was partaking of the services of a pornographic “dating” website, with the clear insinuation that Gruber was engaging in what Gear calls “tawdry” activities. Gear revealed his motives for these provably false assertions by using them as the basis for questions about Gruber’s fitness for the office of 7th District Chairman. The full complaint is embedded below.

As we detailed previously, the content of Gear’s email and website posting is the product of Photoshop-style alteration of an otherwise innocent and wholesome profile on a clean, above-board dating website. The only other explanation is that some of the images shown are more reflective of Tom Gear’s internet viewing habits than anything relating to Fred Gruber.

Interestingly, even after issuance of a cease-and-desist letter by Gruber’s attorney, Gear decided to taunt Gruber in a comment to our original post on this subject:

i hope everyone has had their say but if you haven’t please hurry up. EVERYTHING i said in TO THE WOODSHED is 100% accurate. 48 hours is up mr gruber and mr. george, game on, where is the lawsuit? the letter was dated july 2, has it been 48 hours? i have not removed the website or done anything requested of me in mr. george’s letter. remember folks in a lawsuit both sides get to use discovery, can’t wait.

Tom Gear now has his wish.

Gear mentions discovery in his comment. It will indeed be very interesting to see what discovery turns up in this lawsuit. It was a horribly kept secret that a few of the usual suspects had done opposition research on Fred Gruber and were hoping it would turn up something juicy that would give them cause to forcibly remove Gruber as Chairman of the 7th District Republican Committee at the first available opportunity. Apparently their desperation for revenge has now ensnared them legally and will cost them financially to some degree.

Conventional political wisdom for the accused in these kinds of episodes is to simply ignore or downplay false accusations for fear that responding to them to any degree will only give the lies more oxygen. Thugs and bullies count on their victims taking this defensive approach, which allows them to strike with impunity. That’s why it is so refreshing to finally see someone fight back.

Regardless of how you feel about Fred Gruber—and opinions vary widely—no one deserves to be attacked in such a vile and underhanded way. Such coarse tactics are poisonous, as they undermine the trust and mutual respect we have for fellow Republicans, and they cheapen the discourse for all of us. We are glad to see that a blow is being struck against the perpetrators of this kind of injustice.

Hmmm. Filed in Spotsy, when neither party lives there. And overcoming the public figure burden vs. First Amendment rights will be difficult, especially since the filing hinges on whether “datehookup.com” is tawdry or not. The name alone implies something other than “Christianmingle.com” would, that much is for sure.

What is interesting (amusing?) to me is the Republicans that were initially outraged over Gear’s sophomoric smearing conduct of an elected state official vs those who were silent but now feel moved to criticize a filed defamation lawsuit as a political motivated stunt. Hypocrisy should be better at covering its tracks.

It appears that the dems have invaded the GOP with their smear tactics. Go get them Fred.

This nothing more than a political stunt and a shameful waste
of taxpayers’ resources. Since it appears that we cannot even win our own folks over by challenging the other side’s ideas and the proper role of government. Just sue the bastards….. not the other side but our own. We may win some local elections with this strategy but will never win over the hearts and minds of those who really love America. Just another sign that the Republican Party in Virginia is leaderless and narcissistic…. A losing combination in 21st century politics.

Using specifics, what taxpayer resources are being wasted? Thank you for your response.

judiciary. I could write a treatise, but will spare you. but this has hit the courthouse; & to get out of the courthouse, a judge has to get involved. taxpayer dime.

Isn’t this goon tied in with VAGOPNOW?

Never the less I think if your going to run for office then run on your own record not on smearing your opponent . And yes that’s politics but I’m tired of all the negative crap on both sides . For once I’d like to hear how a candidate is going to fix things , not how one of them fingered , so and so through her pretty pink panties .

Is it safe to assume the “Dr.Evil’s One Millllllllllion Dollars” amount as being out of the realm of reality?

Yes. It’s more of an upper limit than a realistic expectation. It’s also an attention grabber.

This whole complaint was a political move. The way it’s drafted and the damages make that clear.

You go Fred! That’s the way to squash sour grapes!

I have never filed a defamation complaint before. Does it have to be verified under Virginia law?

Not that I am aware of. And he didn’t really go through the elements of defamation, either. I don’t know if this will make it past a demurrer.

Huh? The elements of defamation are (1) publication/dissemination; (2) actionable statements (i.e., something false and injurious); and (3) intent to make the statements. Punitive damages are available when malice (i.e., purposefully disseminating known falsehoods for the purpose of damaging the plaintiff’s reputation) is shown. I think all of these elements are pretty plain in the complaint.

I would have been more clear about the elements, this was all over the place. I would have also pointed out why this meets the four part fact test (vs. opinion), and I probably would have teased out the damages being asked for. But hey, like I said, we’ll see if this survives a demurrer.

While you could have written this much better since it’s your area of expertise, it sure looks legit to the rest of us. But what do we know? Nothing compared to your vast experience in this area of the law. Perhaps you could volunteer your expertise and rewrite it for Mr. Gruber. I’m sure he would very much appreciate your level of expert assistance and years of experience in this particular area of the law. No doubt your writing would easily survive any demurrer in Virginia, considering your experience. We need to stop scum like Gear from ruining the fine reputations of men like Fred Gruber. Republicans all across the state will appreciate your kind, pro bono, assistance. It could happen to anyone and we would all hope to be represented by an expert such as yourself. Thanks Bri for volunteering to help!

… pain suffering (sic) and loss of enjoyment in llfe

That’s grounds for tossing the whole thing out right there. Wah Wah. Can judges use the phrase “STFU” when telling a plaintiff to suck it up?

Bringin’ the class as usual, thanks Bruce.

not if they want to get re-appointed

Regardless of the issue – I think the whole Gruber thing is dumb, honestly – that’s a poorly drafted complaint. Way too argumentative and filled with a lot of speculation.

wonder who is representing Gruber & Gear?

Not how I would have written it, but it works.