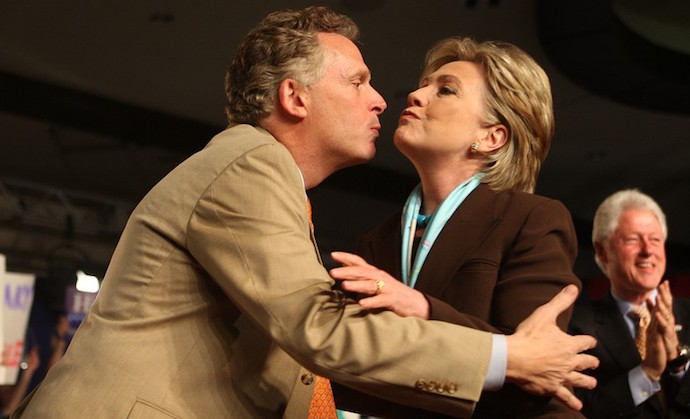 Yesterday, Virginia Governor Terry McAuliffe announced that he had awarded the contract to widen Interstate 66 outside the capital beltway to Express Mobility Partners, a consortium of finance and construction companies. Â The deal is a so-called “Public-Private Partnership,” an arrangement growing in popularity around the country as a way for cash-strapped states to finance needed transportation improvements.

The “Public” part is that the state gives the projectÂ to Express Mobility Partners in exchange for a cash payment of $500 million and a promise to maintain the highway and complete agreed-upon improvements. Â The “Private” part is that the consortium has the uncapped ability to charge tolls on that stretch of road for 50 years.

Which brings us to this. Â To finance its work, Express Mobility Partners includesÂ a private equity investment companyÂ called Meridiam. Â Meridiam’s North American Chairman is Jane Garvey. Â According to Politico, as Bill Clinton’s former head of the Federal Aviation Administration, Garvey just so happens to also be one of Hillary Clinton’s top advisors on transportation policy.

This Jane Garvey, as seen from WikiLeaks emailing with John PodestaÂ about her role in electing Hillary Clinton: 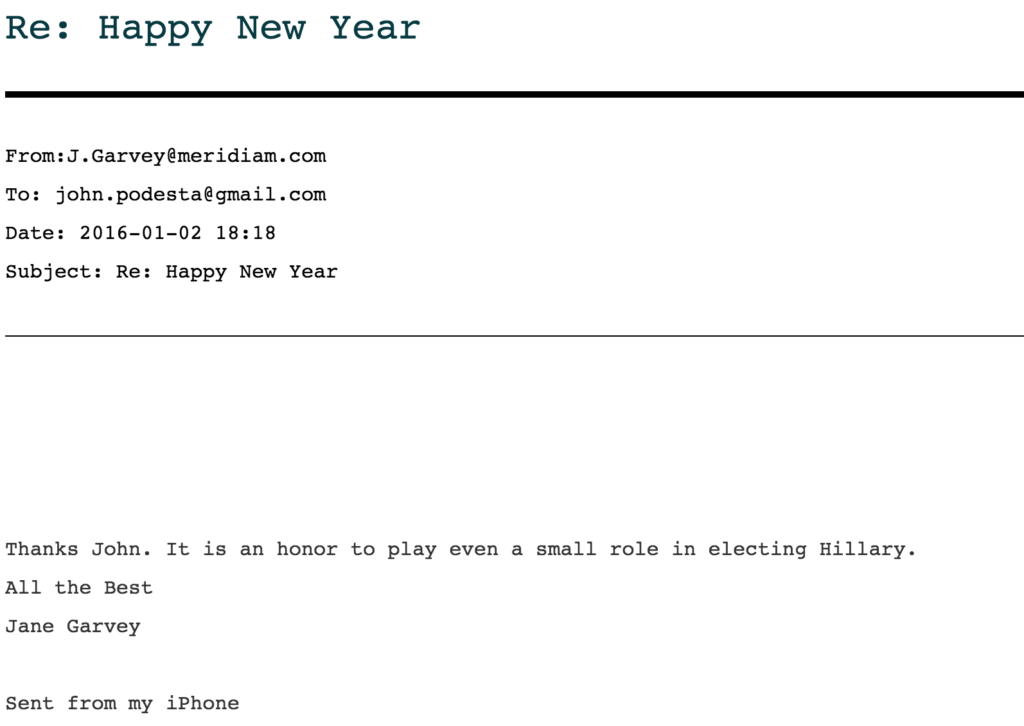 This Jane Garvey, who maxed-out as a donor to Hillary Clinton two years in a row, as seen from the FEC’s website (here and here):

McAuliffe, for his part, is known forÂ bons mots like this:

Let me tell you, itâ€™s a lot easier to raise money for a governor. They have all kinds of business to hand out, road contracts, construction jobs, you name it.

I’m sure the Governor would say it was all just a coincidence that Garvey’s company happened to have the best bid. I’m sure he’ll deny that he ever had any contact with Garvey, or that he discussed with anyone Garvey’s connections to the Clinton campaign. If asked, he’ll say politics had absolutely nothing to do with his decision, and that any suggestion to the contrary is “silly season.”

It would be nice if someone in the mainstream media even asked the questions though, wouldn’t it?

We can’t draw definitive conclusions from the fact that the winner consortium was headed by a politically-connected pal of the Governor’s…one who is a maxed-out donor to McAuliffe’s chief political patron, and who like McAuliffe also serves as a Hillary Clinton advisor.

But at some point, coincidences that all point in the same direction start to look like a pattern.

And this differs from “outsourcing” our state’s infrastructure how exactly except it has a misleading marketing branded name “Public-Private Partnership” for the gullible? I understand that a Clinton crony governor is going to do everything possible to steer a crony laden potential state infrastructure contract to a fellow Clinton group of cronies and likely paid up Foundation membership participants, after all it is what they do – EVERY TIME.

But what you fail to note anywhere in this article is that the whole rotten, potential crony dealing Public-Private Partnership concept was hatched and pushed forward in the 2013 Virginia state Transportation Plan, not by Democrats, but by a large and senior group of Richmond state Republican leadership and it was the Republicans NOT the Democrats that really pushed for this bill’s contents (including this outsourcing concept) and carried it over the line for final passage in the Commonwealth. This slant may score you points on partisan finger wagging but once again a story told with the facts half presented to your readers. Not the first time thinking back to Cleveland.

Potential cronyism vs realized cronyism, a distinction worth noting.

“coincidences that all point the same direction start to look like a pattern.”

So what happens if the deal goes bust? Will the state be forced to buy back the lease from the creditor in the face of having the property auctioned off to an unintended new use?

This is just business as usual for a member of Corruption/Clinton Incorporated. He is lifetime member of that team. This is the way they do business– contracts, jobs, fortunes for cronies. They trade on their political power. That machine is the perfection of corruption.

Counselor, you need to work more on introducing reasonable doubt.

From the press release…

Delegate Chris Jones said, â€œI am proud of the major bipartisan reforms we have made to the Commonwealthâ€™s P3 process. These improvements have increased competition which will save taxpayer resources and result in better transportation projects that benefit our regions and the Commonwealth as a whole.â€

Bruce, I’m not criticizing the sufficiency or terms of the deal. I’m criticizing a process involving such an apparent conflict of interest and cronyism. You’re smart enough to know the difference.

There’s four different companies in this consortium, and only two companies submitted bids.

You’ve got to have more that just conspiracy theories for me to seriously think something wasn’t right here.

These pay for play… um I mean pay roads have meant jack in terms of relieving congestion in Northern Va for the average taxpayer. As a liberal doesn’t it bother you that cronies of Democrats are enriching themselves and achieving nothing in terms of benefit to the average citizen.. oh except those that can pay the 10 dollars or more one way to drive on these roads sponsored by Clinton Grifters?

The truth is that both sides of the aisle are all in for these public-private partnerships. I live in Hampton Roads where Bob McDonnell is known as Toll Booth Bob for the PPP he put in place for the tunnels between Norfolk and Portsmouth. Unlike McCauliflower, I don’t think McDonnell gave the deal to one of his cronies, but it’s STILL a bad deal. It has destroyed many a small business, particularly in Portsmouth, and those who travel back and forth to work got a HUGE tax increase. Calling it a user fee is just words. Taxation is still theft.

All this because the exceedingly stupid politicians on both sides have absolutely NO understanding of econ 101 and they don’t have the cojones to clean up VDOT.

An uninterested media will not focus on this because he’s a Democrat and they protect Democrats.

It’s good to be a Democrat.

I don’t know about being good, but it is enriching.

Vote Tue to elect Trump so we can start to #DrainTheSwamp; and yes, that includes flush our Gov. McAwful away!

It is hard to flush team Clinton Away… they cling to the bowl.

Why am I not surprised?