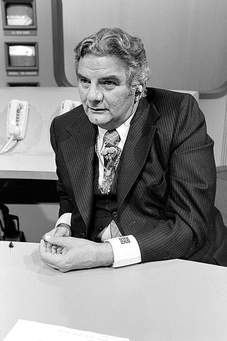 Jimmy “The Greek” Snyder (From www.bronxbanterblog.com)

High on my mystery-list is this question: How do people become experts? On the surface, it seems obvious. At his coffee shop my buddy Al explains it to me as if I were somewhat more backward than a mentally-challenged child.

“Someone becomes an ‘expert’ in a field because he has done well in it,” says Al. “Ex-quarterbacks do football color commentary. Retired generals talk about war and military matters for Fox News or NBC. Judges explain the law. And so forth. What’s not to understand?”

Naturally, I can see all that. I listen to Phil Simms or Sonny Jurgensen talk about football because they were great players. They speak with authority. But what about those guys who were mediocre players – or not players at all? Why do we treat them as “experts”?

Al rolls his eyes. “What are you talkin’ about?” he wants to know. “Networks don’t put duffers on the air. It would make their sports programs look stupid. People wouldn’t watch them. Their ratings would fall, and the network would lose money.”

I agree (with my fingers crossed), but like Joe Gibbs and the Redskins I have run a “misdirection play” on Al. I’m not just talking about football now. I’m talking about other fields where this crystal-clarity of expertise doesn’t seem operative. Here’s an example.

On his weekly radio program, a well-known expert on child rearing gives counsel on family, children, sound living, and personal maturity. He is well educated and clinically experienced, and has successfully raised his own family. I have never found his advice false or ill considered. He is articulate and very wise.

But sometimes he’s not the only one talking. On one occasion he hosted a few business executives he had met on a summer vacation. His guests related how they had neglected their families while pursuing their careers. Some of their children turned out badly. Years and funds were spent on costly repairs. Meanwhile, each man had become professionally and financially successful. And, eventually, each had a personal “epiphany” about his mistakes.

This was why they were on the radio program of an internationally known family expert. ‘Don’t do what we did,’ was their message. ‘We concentrated on making money, but you should take a different path. Here’s what we should have done…’

Their message made me think: Suppose ESPN interviewed a coach whose team had the poorest record in the league. If he said he now knows what it takes to succeed because of all the things he and his team had done wrong, would he be credible? (Seriously?) No, the success-oriented world of pro sports doesn’t work that way. You have to have done it, not just know how you messed up.

I don’t know if our child-rearing expert took any heat for presenting his don’t-do-it-the-way-we-did guests that day. Perhaps he did, for I don’t believe they were on the show again.

In Fiddler on the Roof, Tevye sings, “When you’re rich, they think you really know.” Thus, famous actresses can sell things like cookbooks. Sure, they might include some good recipes. But what would an actress know about cooking beyond some limited experience as a girl in her mother’s kitchen? A successful actress could never have spent the time needed to become a really great cook like my wife or millions like her. Yet she’s out there selling cookbooks. Go figure. It’s like having a non-player do football “color.” Actually, this has been tried without much success.

In the 1980s, CBS executives thought it would be entertaining to make a fast-talking bookie into a football commentator. Jimmy “The Greek” Snyder – born Demetrius George Synodinos – was a colorful odds-maker, so it was assumed that he really knew football. He didn’t, but viewers tolerated his semi-comic ramblings. Eventually, he made some witless comments about black athletes owing their exceptional abilities to “good slave breeding.” When a public uproar ensued, CBS decided to end its experiment in creative commentary. (Da Greek wuz toast.)

The estimable Mr. Snyder crashed because his public knew he wasn’t a real expert. One slip and he got the bums-rush. (This actually predated today’s everybody’s-a-racist craze.) But when CBS News Anchor Dan Rather invoked an anti-black racial stereotype, in July 2001, the network ignored the incident and refused to answer questions about it. Considered a genuine expert by the public, Mr. Rather had such cachet that he skated by on thin ice that wouldn’t support The Greek. But in September 2004 the ice finally cracked when Mr. Rather released forged documents that were obviously meant to disrupt the presidential campaign. The public would not countenance this, and Mr. Rather resigned soon afterward.

What can we infer from these “expert” tales? First, that celebrity can have a role in elevating people to expert status. If you’re rich and famous – or connected to someone who is – you have a crack at becoming an “expert.” Syndicated columnist David Limbaugh is a good writer and says smart things, but I don’t remember hearing about him until his brother, Rush, became famous. Some actors sell products off their fame: e.g., Paul Newman’s Own salad dressing. The “executives” (mentioned earlier) got to comment about raising families because of their connections, but they had no staying power in the field because of another important factor.

That factor, of course, is genuine expertise. The executives lacked it. (Indeed, they admitted it.) Jimmy Snyder self-destructed because he didn’t have it, either. He was just a “character” playing a role. David Limbaugh got a chance because of his brother’s fame, but he made the most of it because he is a legitimate writer, a student of history, and a keen observer of our times and culture. He has earned respect. Getting up there can be a fluke. Staying there means delivering.

An additional factor in the expert-game is the importance of the subject. Football fans overlooked da Greek’s vacuity because the show he appeared on had some legitimate experts. Although many fans take football seriously, they still know it is just entertainment. But when His Greekness strayed into social issues, he got booted. He was far beyond his “expertise” (if any). Wide receivers and point-spreads were one thing; “good slave breeding” (good grief!) was another. This explains why we buy actresses’ cookbooks. It’s a non-critical subject.

Ultimately, the public is the final word on experts and the quality of their expertise. The public can be longsuffering, whimsical, impatient, merciless – even cruel. Sometimes its judgments actually seem perverse or foolish. Nowhere is that more true than in politics.

Politics is unique because its “expertise” is inexact and localized. Sometimes it simply depends on externals like oratory or appearance. People regarded as buffoons in one part of the country are venerated as “distinguished statesmen” in their home states. Even within a state, people of one district might consider a neighboring district’s representative a poltroon or an outright swindler. Yet his district elects him by large margins. As Tip O’Neil famously said, “All politics is local.”

Curiously, genuine technical experts are often not good leaders, and great leaders are rarely experts. Herbert Hoover was the most admired man in America when he won the presidency by a large majority in 1928. Having made a fortune of $10 million as a mining-engineer, he was considered a managerial genius. Yet the economic collapse produced by the Great Depression – when 25% of the nation’s banks failed due to over-investment in the crashed stock-market – was beyond Mr. Hoover’s ken. He had no clue how to deal with it.

On the other hand, men of only modest intellectual gifts – e.g., Franklin Roosevelt and Ronald Reagan – dealt effectively with serious national problems on their watch. Neither brought any particular technical expertise to the office. With the nation in crisis, FDR gathered capable people around him and stepped out confidently. He spoke to us as though we were his neighbors, and he made us believe in ourselves. The national confidence he rebuilt helped us fight the greatest war in history and defeat two dangerous enemies. (Not bad for a rich boy who never held a real job.) Not all of FDR’s policies were effective or wise, but he was an effective leader because he inspired trust and made the people believe in themselves and the country’s greatness.

Mr. Reagan – widely mocked as an “amiable dunce” who was just “reading lines” – made a lasting mark on the nation with wise financial policies that tamed inflation, rejuvenated the economy, and rebuilt American pride. The stock market, which had been hanging below 1,000 from 1967 to 1981, rose to 3,000 by the end of George Bush’s term – setting the stage for the great bull market of the ‘90s. Mr. Reagan also enacted defense-policies that ultimately collapsed the Soviet Bloc. Historians regard him as one of the two greatest presidents of the 20th century. (FDR is the other.) But, of course, he was only a Grade B movie-actor playing a role.

Ordinary people rely on many types of experts. Nuts-and-bolts experts comment on football, child rearing, the stock market, military matters, business, etc. The public ruthlessly weeds them out for quality and credibility. Presidents, no less than ordinary folks, need real experts to advise them. The soundness of a president’s policies often depends on the experts around him. And the most effective presidents are smart enough to know what they don’t know.

Leadership requires a particular type of expertise – call it the “expertise of greatness.” Real leaders exhibit it via the signature behaviors of common sense, trustworthiness, honesty, confidence, plain speaking, toughness and optimism. None of these can be faked for extended periods. FDR and Ronald Reagan exhibited these qualities in spades. Look for them among the people who wish to lead us. They will indicate who can attain the “greatness” that we need.