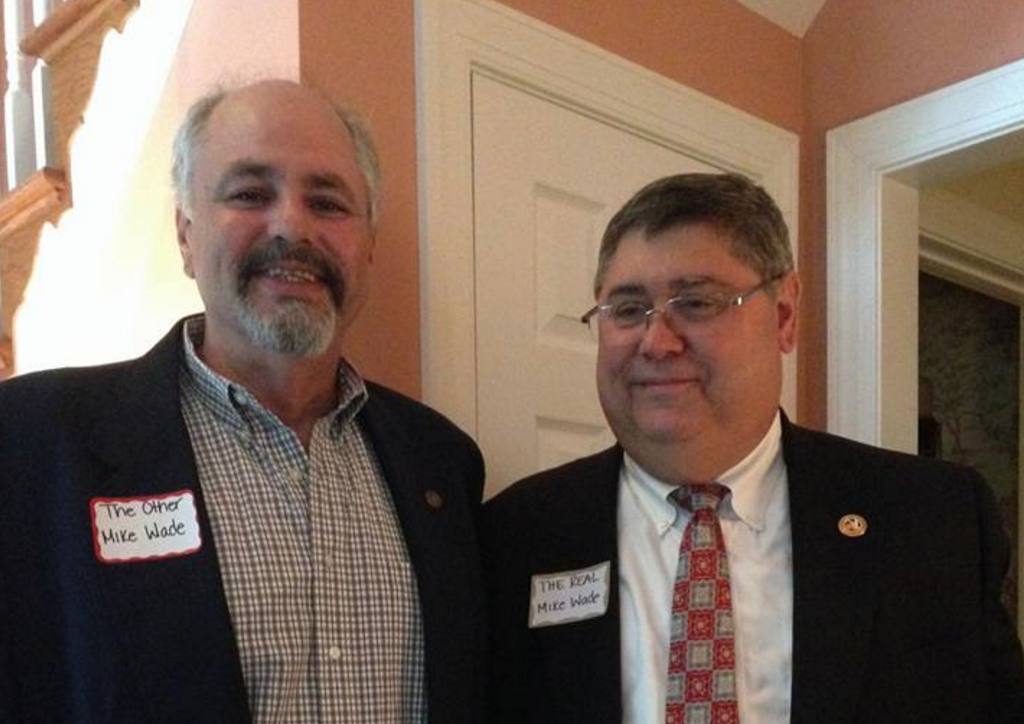 As longtime readers of The Bull Elephant may recall, a vicious email campaign was launched against newly-elected 7th District Republican Chairman Fred Gruber in June of 2014. The “To the Woodshed” email ostensibly came from a former member of the House of Delegates from Hampton, Tom Gear.

In Anatomy of a Smear Campaign, we detailed the outrageous nature of the attacks on Gruber’s character, and how that and similar defamatory emails (remember VAGOPNOW?) were transparently calculated to injure the personal reputations and political standing of their victims. As we wrote at the time:

Today is one of those occasions where we are going to expose the underbelly of those who have gotten away with outright thuggery for far too long. Today, we’re going to outline for you one of the favored tactics of the besieged old guard of our Party: the smear campaign.

Shortly after this story came to light, Gruber filed a $1 million defamation suit against Gear.

The case had gone silent for quite a while, until today, when Gruber’s lawyers filed a motion seeking to amend their earlier complaint. Attached to that motion was a sworn affidavit from Gear in which he acknowledges that the allegations in his “Woodshed” email were false, and further went on to implicate those who he says put him up to it.

First up is former Third District GOP Chairman Mike Wade. Wade, according to numerous sources close to the matter, is apparently currently consulting for the Henrico Sheriff of the same name on the Sheriff’s campaign to oust Rep. Dave Brat.

In his affidavit filed today with the Spotsylvania Circuit Court, Gear writes:

I was asked by Mr. Mike Wade to lend the credibility of my name to this effort. Mr. Wade was the principal architect of the “To the Woodshed” campaign. See Exhibit 2. Mr. Wade provided the list of email addresses and, together with Mr. James Hicks who either was at the time an employee of RPV or had very recently been employed by RPV, created the website and the email database used in the campaign. I was told by Mr. Wade he came into possession of the email list from the U.S. Senate campaign of George Allen “George Allen list.” Mr. Wade told me it consisted of 70-80,000 email addresses. It is my understanding that Mr. Wade and Mr. Hicks were responsible for the logistics of sending the Gruber Email to addresses on the George Allen list, and of posting the contents of the Gruber Email on TOTHEWOODSHED.COM. 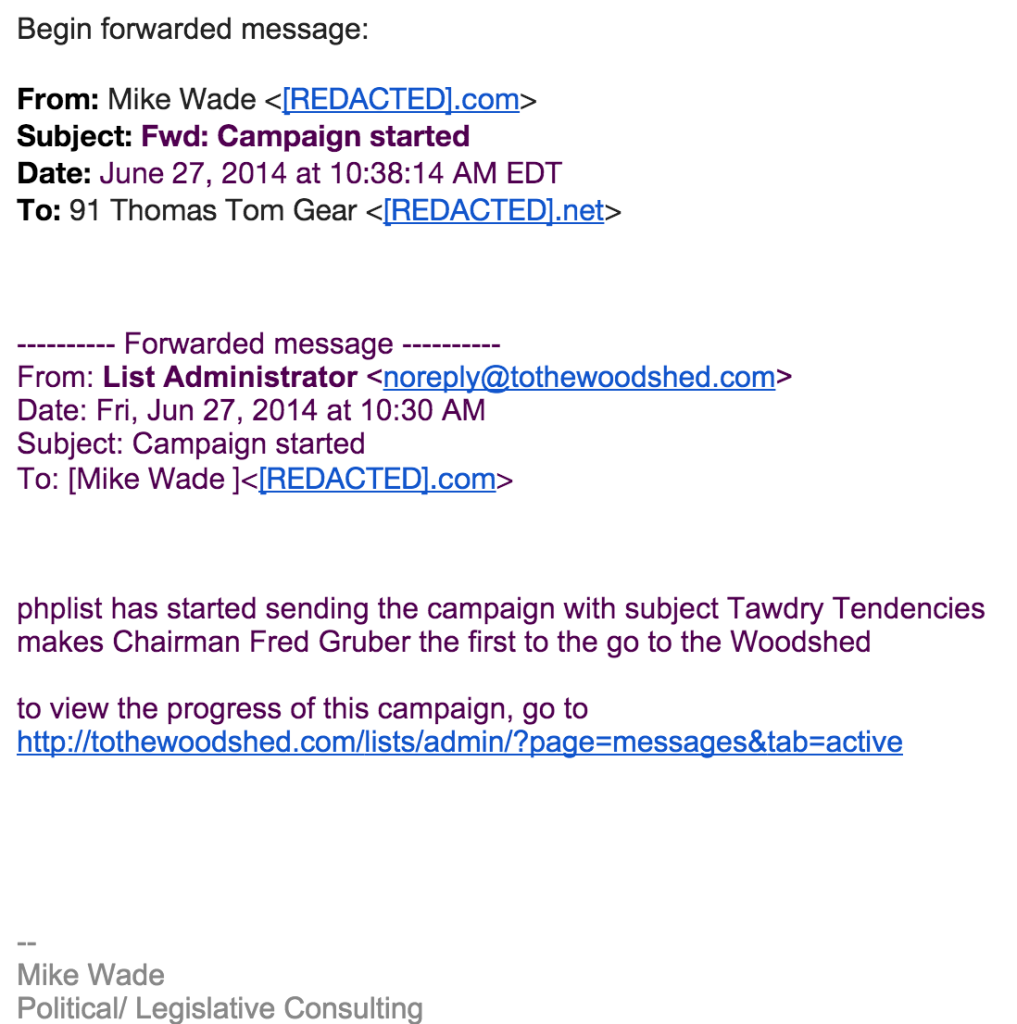 Wade email to Gear showing involvement with the ‘Woodshed’ campaign

Mr. Wade, upon my query on multiple occasions, told me that what was contained in the Gruber Email was “one hundred percent accurate.” In order to give me further confidence in this, Mr. Wade assured me repeatedly that Mr. Thomas, the second most senior official in the Republican Party of Virginia behind only the Chairman, had proofread, made changes and approved the Gruber Email. I was in fact assured of the complete accuracy of the Gruber Email the night before Mr. Wade caused it to be sent out.

In fairness to Thomas, The Bull Elephant contacted him before publishing this story. Thomas disclaims any involvement in the Gear/Wade email, as does Chesterfield County GOP Chairman Donald Williams, whom we also contacted. Gear wrote that those

In case anyone is wondering at this point what the motivation was behind the attack on Gruber (and others maligned in the VAGOPNOW emails), Gear clears that up nicely:

The campaign was launched in the wake of the defeat of Rep. Eric Cantor in the Seventh District Republican Primary, which had followed on the defeat of the Chairman of the Seventh District Republican Committee, Linwood Cobb, who was a close ally of Rep. Cantor’s.
…
The Gruber Email came about as part of an organized effort by members of what later came to be called the Virginia Conservative Network (“VCN”), a loosely-affiliated group of Republican politicians and activists organized around the goal of gaining control of Republican committees around Virginia, including especially the governing committee of the Republican Party of Virginia (“RPV”), the State Central Committee. The “To the Woodshed” campaign was launched principally to further VCN’s cause.

For background, TBE contributors have written about the Virginia Conservative Network here.

Folks, this is just about as dirty and desperate as politics can get. If what Gear has sworn is true, then those involved should be ashamed of themselves for debasing the Virginia Republican Party in such a crude manner.

In fairness, what Gear is revealing is not first hand knowledge of the direct involvement of any of the named individuals other than Mike Wade, and the two named individuals whom we contacted put distance between themselves and the allegations in Gear’s affidavit. Consequently, had Gear not sworn his statements under penalty of perjury, we would not have published them. We invite any of the men implicated by Tom Gear in this scandal to contact us to put forward any corrections to what Gear alleges, or to otherwise disclaim involvement. The Bull Elephant will publish all sides of this story.

In the meantime, we will also publish additional materials arising from this matter, including the full affidavit and attachments, in the coming days. These materials will reveal the alleged strategy behind the defamatory emails, and the mechanics of how they came about.

[…] details, Steve Albertson at the Bull Elephant has done a brilliant job of covering this story. Click here to read. It is an unbelievable […]

Sad Indeed! And so many us thought Cantor & his bunch were spending most of their time working hard to “create jobs” like they told us they were doing. Sad Indeed!

Reply
Gruber signals intention to widen scope of defamation suit - The Bull Elephant January 30, 2016 at 10:47 am

[…] The Bull Elephant reported yesterday, 7th District GOP Chairman Fred Gruber has filed a motion to amend his complaint in his defamation […]

it seems like corruption is NOT limited to democrats that want to keep their power
power for themselves & not for the people they serve
a problem caused by ‘ ROBO VOTING ‘, running rampant in the democratic party
now infiltrating the republican party—whose only cure is involvement by the people ?

If a connection to Mike Thomas is proven, he must be removed from the RPV.

Yep. no other way to handle it.

You are surprised Mike Wade, former 3rd District Chair is involved why? He and Tom have been friends for a long time and this had Wade’s finger prints all over it

The 3rd District Committee worked long and hard to rid themselves of former chair Mike Wade and his compadres. This is their standard operating procedure. Steve Albertson should know this all too well.

Steve, would have been helpful to include a brief summary of the original action (allegations) on which Fred Gruber’s suit is based.

[…] the the details over on The Bull Elephant blog. Prepare for your jaw to […]

It appears another blow has been struck to Cantor and his machine. It could not happen to more deserving folk.
It’s a great day for Fred Gruber!

What made Gear change sides?

the fear of perjury?

Mike Wade needs to step down as Sheriff as either he truly is a Cantor puppet or he lied to the voters of Henrico County who re-elected him. Trying to primary Dave Brat is just another scheme cooked up by the former leaders of the 7th District. Thanks Fred Gruber for cleaning the barn

ready to hear all sides.

Really? There are two “sides” to this? We have a sworn affidavit. Just damn.

Wow! How embarrassing it is that my Congresswoman Barbara Comstock is one of the founders (along with Cantor) of VCN!

In fairness, there is no reason here to believe that Barbara had any knowledge of this email campaign. I have every hope she would have put a stop to it, had she known.

You must get really tired of cranking that handle on the old excuse spin machine for Barbara Comstock. I had been told by people I respect that you weren’t just a spinmeister for her shenanigans have I been misinformed? So maybe her tracks are covered maybe not on this event but she is a major VCN player so what do we expect to hear from her regarding these revelations and her continued association with this group. My best guess – NOTHING. Better keep that spin arm warmed up and ready for future action as it looks like it could evolve into a full time position for you.

I am not spinning anything. I think everyone should stand on their own record and guilt by association should be used sparingly. My record as a conservative activist who tends to support the kind of candidates VCN opposes in GOP nominating contests is hopefully clear but I would gladly answer any questions you may have. My email is [email protected]

Barbara is a part of the Cantor machine and the VCN Pac against conservative candidates across the Commonwealth. Comstock should never have joined forces with them against the candidates that you, me, and the other grassroots support. I know people in the 10th district are extremely loyal to our Congresswoman but she is not a friend of conservatives.

open your eyes. Comstock look at what she has done and for heavens sake look at her votes.

It was embarrassing that Barbara Comstock aligned with Cantor to found VCN before this story broke today. This just makes it worse.