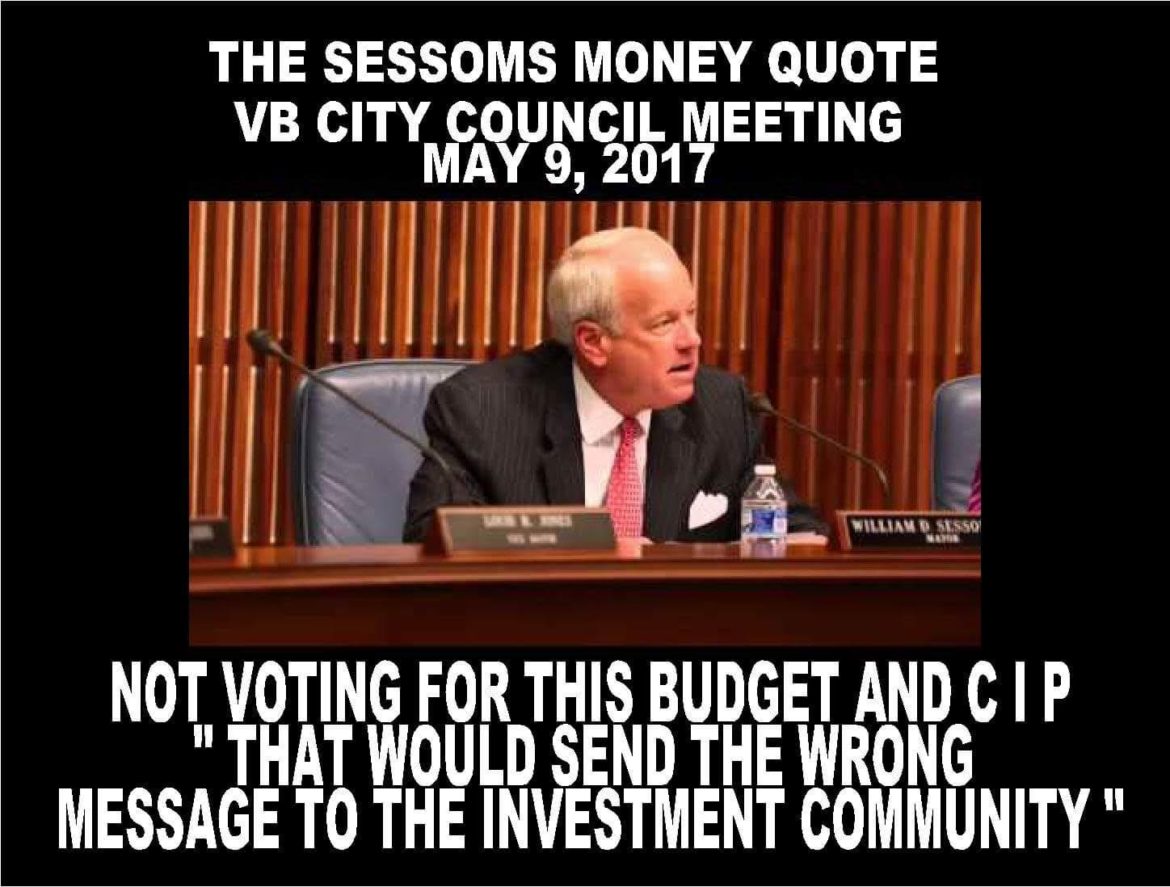 More than 20 individuals testified about flooding problems at their homes and businesses and urged city council to abandon sports arena and beach widening projects in light of the destruction from Hurricane Matthew.

Mayor Will Sessoms, former Towne Bank executive and self described centrist, went on to assign Global Warming as a cause for the flooding.

While climate change has had measurable effects on average temperatures and moderate sea level rise has occurred, the neighborhoods in question are landlocked areas and not adjacent to any ditch or tributary of local water ways leading to the Atlantic Ocean or Cheapeake Bay. Furthermore, upon contacting public works I discovered much of the sewer and stormwater infrastructure in place at the locations of repeated flood problems were built in the 1960s and fell far short of the stormwater management standards of today. In fact, drainage areas and pipe diameters in place at the Windsor Woods and Aragona Neighborhoods were built before Virginia Beach code existed and the land was part of Princess Anne County.

Sessoms then went on to make another dubious claim in response to a councilman requesting deferment on the issue. Sessoms said “not voting on the budget could send a bad message to the investment community.” A clerk later reiterated that if a CIP budget wasn’t voted on, that it would go through as originally written by city staff anyways.

While Virginia Beach is a fairly low lying city adjacent to water, we rate the claim that Global Warming had significant impact on local flooding or that deferring on a budget vote would harm local investment as ‘Mostly False’.

“At a heated city council meeting…”

Was it heated because of global warming?

Bonus question: Was global warming the reason that Hillary lost the election?

I apologize to any of my readers who have to trudge through Mr. Kirwin’s muck here. You see, Mr. Kirwin is a paid consultant and strategist. He works on the campaigns of Mayor Sessoms, Rosemary Wilson, Shannon Kane, and every other city council member who has voted to raise our taxes and fund development projects at the beach instead of neighborhood projects to protect residents. I apologize for the inconvenience this has caused, hopefully he will move on and find happiness outside of trolling small-time bloggers and activists like myself to protect his monied interests.

Fact check: The person you called “a clerk” was actually the City Attorney.

Fact check: No one said “if a CIP budget wasn’t voted on, that it would go through as originally written by city staff anyways.” That was only said of the operating budget, not the CIP. Bonds can not be issued by default.

Your always such a cheerful voice for ‘We the people’ Mr. Kirwin, I do appreciate your commentary. Bless your heart.

I tried to match the tone of the column