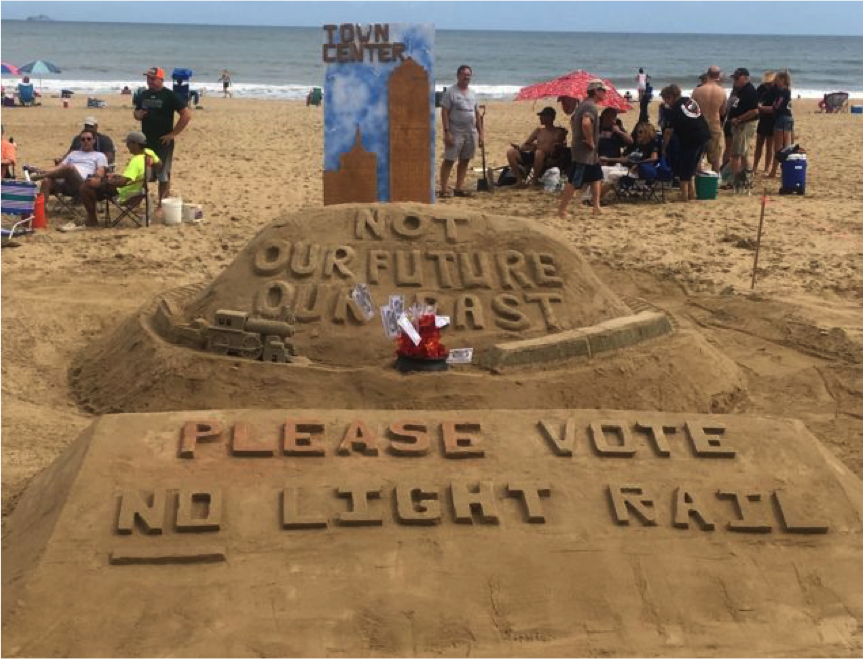 Recently there have been grumblings on the net accusing candidates of being pro light rail, mostly to create confusion or score points with light rail opponents in the area. I looked up evidence of which candidates in the Virginia races supported a tax bomb boondoggle known as The Tide light rail. I took the time to address each candidate running for statewide office.

Recently internet provocateur James Cohen, along with other Bryce Reeves supporters, have taken to social media to denounce Vogelâ€™s vote on a house bill from 2008. Originated by Virginia Beach Rep. Bob Tata, HB 6028 allowed the locality to study light rail; hence every house member and every Senator voted in favor of it, save Senator Ken Cucinelli. Being a Dillon Rule state, new taxes would need to be approved from Richmond and a study would need to be performed to qualify for state funds.

Little was known about light rail at the time, and The Tide had not yet bombed to the tune of the worst ridership profit loss in America. The need for a study for fact-finding can hardly be construed as a vote of support for light rail, as it was deemed a public interest by locally elected officials and transit authorities, and had yet to become a voter referendum. Though Vogel voted for HB 6028, saying that she is Pro-Light Rail for approving a study is a stretch, and would insinuate that all 99 House members who voted yea were Pro-Light Rail as well. This claim earns the rating of mostly false.

Bryce was not in office when HB 6028 was voted on, nor was he in office when its accompaniment HB 564 was introduced either. The only transportation related bills Mr. Reeves has voted on as State Senator involves opening car doors in traffic and smoking in the presence of minors. Â Reeves effectively never had a chance to weigh in on the light rail issue.

Similar to Senator Reeves, Ed did not hold office at the time of the light rail votes. Hey has at times however offered alternatives to investments in light rail and other infrastructure projects championed by former challenger Mark Warner.

Depending on how you view the government role in funding transportation, Frank Wagner is a friend or foe. He has recommended tax increases on gasoline as an alternative to user-based fees such as tolls. He voted for the 2012 Transportation Bill, which many have correctly identified as the largest tax increase in Virginia History. When it comes to light rail, Senator Wagner voted for HB 564 and Co-Sponsored (then oddly enough abstained from voting on) HB 6028. Statements referring to Wagner as a supporter of Light Rail are mostly true.

Delegate Davis, who prefers an RV to rail travel, has been accused of voting for light rail not once but twice while on Virginia Beach City Council. Glenn Davis not only supported light rail in his campaign and in his votes, but fought against proposals to put a citizen referendum on the ballot. Davis also received campaign money for his 2012 Council seat from the very man who authored HB 6028 and HB 564. Any statements suggesting Glenn Davis supported light rail are mostly true.

[…] rail. While hindsight and simulated votes are 20/20, I have previously penned a fact-check on which statewide candidates ACTUALLY supported […]

Here is a link that defines how “in bed” Frank Wagner is with the power company. How he lied about the bill, and how he blocked an attempt to reverse the bill in 2017. Screw you Frank.

Little was known about light rail? You agree with Glenn Davis, who said that very same thing in 2012. That’s why he thought 2012 wasn’t the best time for a referendum, and without the numbers, it passed. In 2016 when the costs were actually known, it failed.

So you excuse Vogel for voting for light rail because not much was known but you castigate Davis for wanting to delay a referendum until more was known.

Also, the 2013 transportation bill (not 2012) specifically prohibited revenue being used for light rail in Hampton Roads.

I addressed that typo – also, was it not written in 2012 – using that years baseline budget? Sort of how the first year someone new takes office, they are dealing with their predecessors budget – anyways, it’s just 1 yr and people know exactly which Transportation bill I’m talking about

And yes my big $$$$ friend, Davis knew PLENTY by then. Plenty.

You left out how Davis supported the 2012 referendum and voted to put it on the ballot because Wally’s citizen effort failed to get enough signatures. But, hey? What’s a few facts missing in a slanted “fact check”.

For the record, Glenn supported but never voted for LR. Reeves for as long as I have known him has opposed.

Brian, Brian, Brian – Its noble of you to defend your friend and client, but us here in the real world understand who was funding Davis’s campaign and for what reasons. He supported the expansion of light rail and didn’t want a referendum until he was pressured and felt his next pursuit of office was at stake. He has received the lowest grade among VA Republicans from the ACU and has rarely seen a tax increase he doesn’t like.
https://votesmart.org/candidate/evaluations/114376/glenn-davis-jr#.WThqKnMpBnF

Really? That must be why the average real estate tax bill went down while he was on City Council. You know who wrote the 2012 referendum on light rail? Glenn Davis. Funny how he wrote a referendum you say he opposed.

This vote was taken a decade after the push.

I have edited my comment. Instead of hundreds of millions, I have changed it to billions of dollars.

Second, SB 1349 in 2015, the power company “fictional” based bill, has and is still costing Virginia consumers and businesses hundreds of millions of dollars. The passsge of SB 1349 by both the Republicans and Democrats is far more damaging than any vote on light rail. Did McAuliffe sign the bill for money for the Hillary campaign. Republicans in the Virginia House and Senate passed SB 1349 in exchange for money for their sorry fat asses. All legal of course.

Are you writing this establishment garbage to troll for a job because you are being financially strangled by those Wall St. financed student loans? A BS degree with no job?

FRANK WAGNER WAS THE CHIEF SPONSOR FOR THE POWER COMPANY BILL SB 1349!!!!!

Yet, you crawl under the sheets with big oil and Dominion in shutting down any form of mass transit or renewable energy.

Are you to stupid to realize that if you attack the power company with your pen, they just might throw you a bone (compensation) to shut up? Depends on how good you are at it.

It was written in 2012 – it was a very lengthy bill, but c’mon man don’t press me over minor stuff. I also misspelled He – it came out as ‘Hey’ – so preemptively sorry for that too

Ok, fair enough. But since you have precise knowledge of GA bills, then why don’t you tell the readers exactly who wrote SB 1349? Not who the Chief Sponsor was, we already know that was Frank Wagner, but who actually wrote the piece of job killing legislation? Legislation that may not even be legal under the Virginia Constitution. See Link;

Yet everyone bashed Cuccinelli now. How fickle. Folks forgot he does the right thing when nobody is looking. Ken remains one of the bravest and most principled former senators In Va history.

Fair and balanced article Dylan. The GOP has to be the party of fiscal restraint and responsibility. The Tide Light Rail is a land grab scam perpetuated in Virginia Beach by a few very wealthy and powerful developers and bankers who pretty much have their way with city council here. Ken Cuccinelli opposed this thinly veiled effort to abuse eminent domain laws. The ONLY upside for Light Rail is it gives council the means to use/abuse eminent domain to push land owners aside, and that IS what has been really going on here for some time. Im no genius or know it all, but Ive seen the little guy who was powerless to fight eminent domain abuse that Cuccinelli was brave and principled enough to challenge, even way back in 2008.

Yea, right, Trump wants a TRILLION bucks supposedly for infrastructure, Bob McDonnell lied during his campaign about HB 2313, and Republicans in the Virginia House and Senate authored and passed HB 2313 in 2013.

And you got the nerve to call the GOP the “fiscal restraint” party???????

The GOP is anything but.