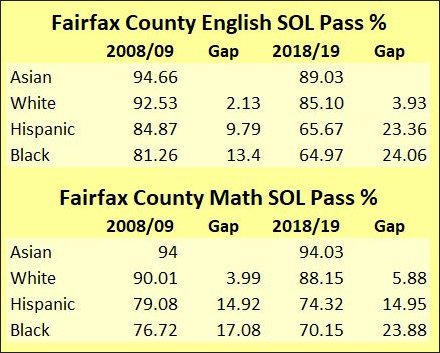 Fairfax County: A School Board Election that Truly Matters

The implementation of social-justice policies in public schools is gaining momentum in urban and suburban school districts across Virginia. Nowhere is the trend more evident than in Fairfax County, which administers the state’s largest school system.

The Democrats’ social-equity agenda has inspired a spirited resistance this year. Republican School Board candidates contend that the Democratic-dominated board intends to re-engineer the racial and income mix of the county’s public schools by re-drawing school district boundaries, even if it means busing some children to distant schools.

Fanning fears is the “One Fairfax” policy adopted by the board that “provides a framework to advance equity.” School board members and senior administrators have made clear their intention to apply the “One Fairfax” lens to the next redrawing of school boundaries.

Ideological Progressives have many attributes, but humility is not one of them. Despite a decade’s worth of policies promoting diversity and inclusion, the racial gap in academic achievement in Fairfax schools has gotten worse, not better. But Progressives are doubling down on failed policies: What’s needed, they insist, is more of the same. The likely consequence will be more of the same — an even wider chasm in academic performance. Progressivism is the problem, not the solution.

The gap in racial performance has been an issue in Fairfax County for 20 years or more. However, the best efforts of schools to address the disparities in educational outcomes have proven fruitless. The table above shows the percentage pass rates for English and Math Standards of Learning (SOL) tests for Fairfax County broken down by ethnicity and race. Asians set the benchmark for academic achievement in Fairfax, as they do throughout Virginia.

These numbers must be interpreted carefully. The SOL tests and standards were revised significantly several years ago, with the result that pass rates fell across the board — for all groups and in all regions of the state. The decline was most marked among lower-performing groups, and the racial gap also widened statewide. Accordingly, it would be premature without deeper analysis to hold Fairfax County school officials responsible for the widening gap in their school system. But it is fair to say that a decade of Progressive social-equity policy has done nothing to narrow the gap.

Desperate to find a solution to racial inequity, Progressives in Fairfax County, as in the City of Richmond and elsewhere, can think of no better solutions than to demand more state money and to fine-tune the racial balance of the public schools. Vaguely citing “studies” and “research,” they hope to find the magic mix that will improve the performance of blacks and Hispanics. Many Fairfax parents are understandably upset that their kids might spend an extra hour traveling back and forth from school during the county’s notorious stop-and-go rush hour.

Even worse, there are no assurances that social engineering will make the slightest difference to the supposed beneficiaries. When you misdiagnose the cause of a social problem — in this case, a reason for the academic underachievement of blacks and Hispanics is an insufficient number of white and Asian classmates — the remedy based on that misdiagnosis is bound to fail, and may well do active harm. If Democrats retain control of the School Board, Fairfax County will learn this lesson the hard way — assuming the Progressives who run the county schools are capable of learning anything at all.