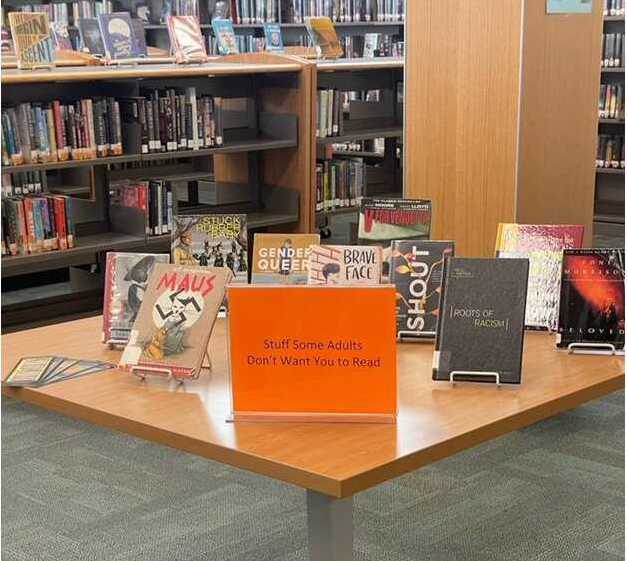 The principal of Langley High School in McLean VA issued an apology to parents and had a sign removed from a school library display reading: â€œStuff some adults donâ€™t want you to read,â€ which included the heavily sexually explicit book, â€œGender Queer.â€

The following is the email said was sent to parents from the principal, Kimberly Greer:

Subject: Message from the Principal

As you may be aware, there was a sign displayed in the school library which has created concern. As the Langley staff works to cultivate and maintain positive relationships with our families, we respect and value our partnership with our school community. We strive to create a welcoming, and inclusive environment where all feel valued and respected. The sign was incongruent with the beliefs of our school and our school division. Poor judgment was used in its display and for this I take full responsibility. Appropriate follow-up action will be taken.

The sign has been removed and I apologize for any challenges this situation has created. As principal of Langley, I remain committed to supporting each of our students and their families and to provide a positive learning environment for all. Our protocols and procedures will be reviewed to avoid situations such as this moving forward.

A post on NextDoor.com, by a man from Great Falls, claimed: â€œThe sign message was directed to rising 8th graders. This post was not about the books. Rather, it was about the message to the 8th graders to trust FCPS [Fairfax County Public Schools] bureaucrats, not your parents. And we all know from history, that the future of societies that substituted state authority over our youth rather than parental authority, did not end well.â€

According to the Langley library website, the librarians are Philip Clark and Kathleen Ortiz.Â  Itâ€™s unclear if they face any sanctions for the sign, or if they were even involved in posting it.Â Â

The library website has a plug for Black Lives Matter, but the recommended reading list includes â€œHillbilly Elegyâ€ by J.D. Vance, who is currently running for U.S. Senate in the Ohio GOP primary.

The following is verbatim from News 4â€™s story, with a few grammatical corrections by me:

Jeremy Mayer, an associate professor in the Schar School of Public Policy and Government at George Mason University, told News 4:

â€œWhoever put that sign up wanted to trigger conservatives,” he said.

Politics have entered the workplace and church, so it is no wonder that it has found its way into schools, especially in Virginia, Mayer said.

Removing political ideology from the debate is almost impossible at this point, Mayer said. The left and right are dug in.

That outrage has landed squarely on the desk of school librarians.

â€œThe more political it gets, the harder it is to get back to talking about the actual issue of having materials in our libraries accessible to our children that provide multiple perspectives on life,” said Jennisen Lucas, president of the American Association of School Librarians.

Lukas says parents are ready to have those tough conversations about what is and isnâ€™t age-appropriate but trolling makes it harder for everyone to trust each other and listen.

â€œYou want to trust that the people who are doing it are doing it with an eye toward wholly encouraging a healthy understanding and not pushing an agenda,â€ she said.

Last fall, Fairfax County Public Schools removed two books from school libraries after a parent objected to sexual content, but they were ultimately put back into circulation, News 4 said.

My view:  My twins attended Loudoun County Public Schools from first grade through high school, and I am so glad they are no longer in school there and feel for any parent with a kid in public schools â€“ especially due to the COVID lockdowns.  The idea of posting a sign like this to entice students to read â€œcontroversial booksâ€ clearly shows how warped and woke the library staff is at this high school â€“ which is one of the best academically in Virginia â€“ and is symbolic of the mindset of most teachers and administrators in public schools in this nation today.

But the controversy pales with what is being taught in the classroom.  Each week, we hear of one scandalous revelation after the other with â€œequityâ€ based education, inspired by neo-Marxist critical race theory.

Only through changes in School Boards and conservative groups and philanthropists to invest in how teachers are trained are we ever going to get back to the ABCs and get rid of the BLMs.

Contributing to the sexual promiscuity of minors is child abuse.

They were caught pushing perversion and nothing has happened by way of discipline. You are correct – not good enough.

Hey, if San Francisco can recall their School Board for being too woke, anyone can.

Will there even be a Democrat Party left after November’s elections? It is going to be an annihilation of biblical proportions.