Latest Posts
Delegate Kirk Cox ‘seriously’ considering a run for...
Updated–Montgomery County harms children by closing private schools
Who is Behind NAH, LLC?
Time for laughs! Weekly Memes
Meanwhile, In the Capital of the Confederacy (of...
Delegate LaRock Urges Health Commissioner to Reverse His...
Deceit is not a Conservative Principle 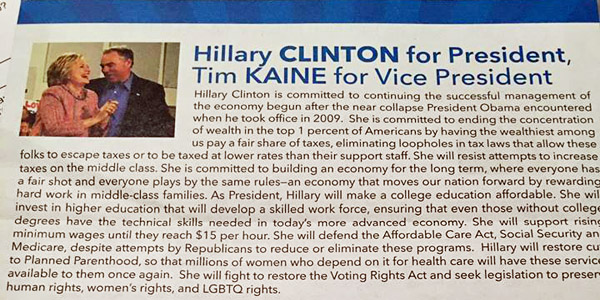 In Fairfax County voters receiving absentee ballots are seeing Democrat campaign ads and a letter from the Governor urging them to vote Democrat.

Jena Jones who lives in Fairfax and is not politically active received her ballot from the Board of Elections stuffed with information on Democrats.  From WND.com,

“I found a letter from the governor of Virginia asking me to please vote Democrat and ‘help keep Virginia blue’ this year. Then I got a letter from the Fairfax County Democratic Committee, giving me a step-by-step, yes-and-no what I should vote for as far as the meal tax and all those other things on the ballot,” Jena explained to WND and Radio America.

Jones did not apply for absentee ballot through the Democrat party.

Jones was surprised there was no information in the ballot packet about any Republican candidate.

“I was a little confused as to why we didn’t get anything Republican at all, and I wasn’t sure why that was included in my ballot at all,” she said.

On the back of the letter from Governor McAuliffe were “glowing biographies of Hillary Clinton, Tim Kaine and her local congressman, Rep. Gerry Connolly”.

“I also was a little befuddled because I figured that this would be a time that you wouldn’t want to encourage voters to go one way or the other,” David Jones said. “It’s just like when you walk into the precinct or the polls, they can’t be within a certain amount of feet from the voting booths, and I figure they shouldn’t be able to put a piece of paper in the envelope with your ballot.”

David was also surprised at the full page letter from the Governor bashing Trump and his policies.

“If it was just a letter saying, ‘Hey we appreciate you voting. Every vote counts,’ that would make sense and I would totally back that. But when there’s a specific flier that says, ‘Hillary Clinton for President’ and ‘Tim Kaine for Vice President,’ laying out their platform, to me it was just biased. It was one side.”

“I just think of the people who don’t have social media or television access, who are confined to a house, who just can’t get out, or are overseas and they’re relying on this information to cast their vote,” David said.

The Democrats will do anything to win in Fairfax County and we have no protections in Richmond as we have previously reported.

If you received a similar absentee ballot you may register your complaints here.

More on the story and a live interview with Jones here.

Who is Behind NAH, LLC?

Meanwhile, In the Capital of the Confederacy...