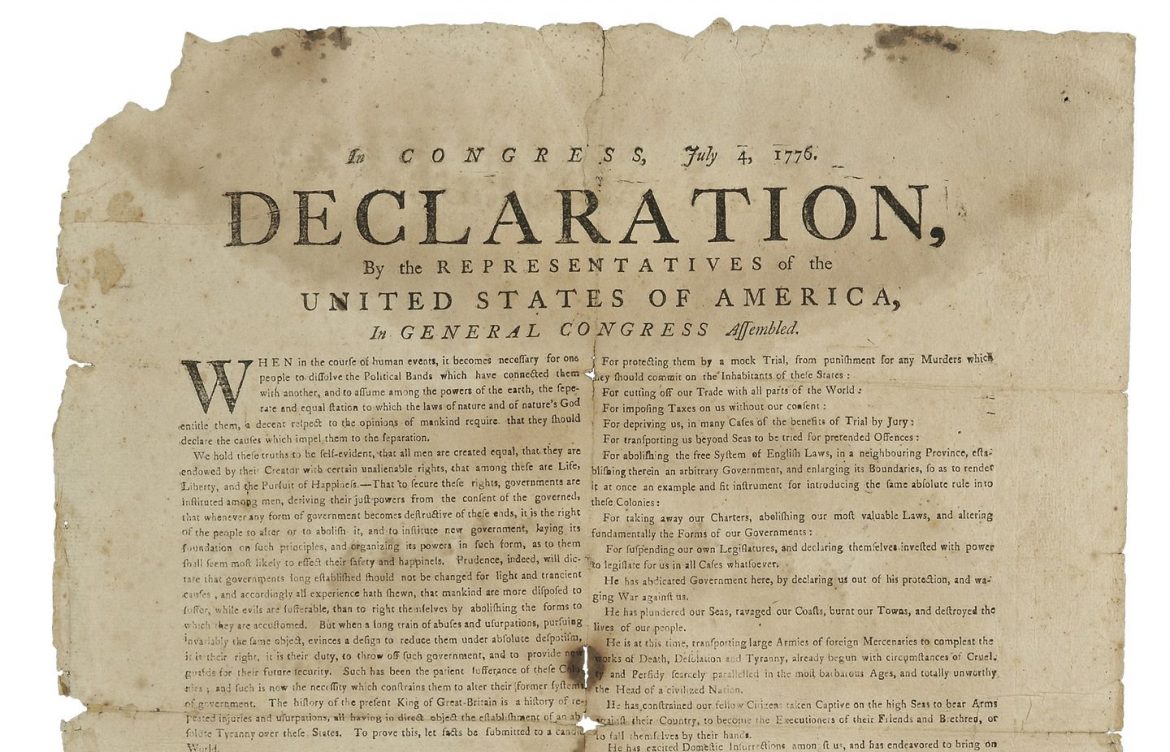 Faith and Freedom: The Foundation and Ideals of America

The essence of America’s political divide lies in how we understand our Declaration. Conservatives see its self-evident truths of people created equally with inalienable rights as the philosophy and ethos guiding our nation. Progressives argue that government needs to evolve to fix modern problems, and have cast aside the Declaration as a moment in time. This argument is not a recent one. It stretches back to before the civil war and has endured to today’s political issues.

During the 5th  session of the Lincoln and Douglas debates for Illinois Senate, Abraham Lincoln and Steven Douglas argued over the philosophical basis of the Declaration and whether it included African Americans. Douglas assumed that it was a practical document. One that merely served a means to an end of establishing colonial independence from Great Britain, therefore justifying slavery. He thought, if there was no philosophy to the Declaration, then there was no national ethos or moral standing pitted at odds with slavery. Lincoln, argued the opposite. That the founding fathers had the foresight and sought to chart a path that ensured freedom over the long term instead of simply for the immediate moment. Lincoln, in his speech on the Dred Scott Decision, stated:

The assertion that ‘all men are created equal’ was of no practical use in effecting our separation from Great Britain; and it was placed in the Declaration, nor for that, but for future use. Its authors meant it to be, thank God, it is now proving itself, a stumbling block to those who in after times might seek to turn a free people back into the hateful paths of despotism.

Essentially, the famous line about our inalienable rights was listed in the Declaration to preserve freedom for future generations.

This debate over the Declaration is the center of our modern political division in the United States. Conservatives give the Declaration the same reverence as Lincoln, while Progressivism has rejected its philosophical meaning.

President Calvin Coolidge explained how the Declaration’s philosophy and spiritual basis maintained our freedoms in his speech on its 150th anniversary. He established that the principles of equality and inalienable rights were brought together through the great awakening, when pilgrims and other religious emigrants sought freedom of religion. He cited Reverend John Wise proclaiming “Democracy is Christ’s government.” Additionally, he proclaimed that faith was the “foundation of our rights and freedoms”.

“A spring will cease to flow if its source be dried up; a tree will wither if its roots be destroyed”. In its main features, the Declaration of Independence is a great spiritual document. It is a declaration not of material but of spiritual conceptions. Equality, liberty, popular sovereignty, the rights of man — these are not elements that we can see and touch. They are ideals. They have their source and their roots in religious convictions. They belong to the unseen world. Unless the faith of the American people in these religious convictions is to endure, the principles of our Declaration will perish. We can not continue to enjoy the result if we neglect and abandon the cause.

This view has been maintained by modern conservatives as well. Ronald Reagan, in his “Evil Empire” speech, distinguished America’s ideals from the Soviet Union’s when he said, “The basis of [our] ideals and principles is a commitment to freedom and personal liberty that, itself, is grounded in the much deeper realization that freedom prospers only where the blessings of God are avidly sought and humbly accepted.”

Ideals of faith and freedom have been at the center of Conservatism and the Declaration upholds these ideals through a philosophy and ethos of equality with inalienable rights for all.

Progressives take Steven Douglas’ stance that the Declaration was a momentary document. In his essay titled, “What is Progress”, President Woodrow Wilson claimed:

The Declaration of Independence did not mention the questions of our day. It is of no consequence to us unless we can translate its general terms into examples of the present day and substitute them in some vital way for the examples it itself gives.

In essence, Wilson stated the Declaration has no philosophy. We need to make it fit today ourselves. FDR took the same approach in his Commonwealth Club Address saying, “The task of statesmanship has always been the re-definition of these rights in terms of a changing and growing social order.”  While Conservatism has a foundation based in the Declaration, tied to our inalienable rights through faith, Progressives have rejected the Declaration’s premise. They may say they care about equity and rights, but if rights can be re-defined, then there is no stable definition, no anchor to ensure rights are protected.

This argument that rights can be redefined to fit modern issues comes from an evolutionary view of government. Wilson’s essay also stated:

“Government is not a machine, but a living thing. It falls, not under the theory of the universe, but under the theory of organic life. It is accountable to Darwin, not to Newton. It is modified by its environment, necessitated by its tasks, shaped to its functions by the sheer pressure of life. No living thing can have its organs offset against each other, as checks, and live. On the contrary, its life is dependent upon their quick cooperation, their ready response to the commands of instinct or intelligence, their amicable community of purpose.

Wilson envisioned and FDR created the Administrative state, or bureaucracy, that hangs off of the Executive Branch today. This apparatus works with minimal congressional oversight and few challenges by the judiciary. It creates regulations that act as law even though they have not been through the congressional process.

President Trump’s response to this is how he has maintained the Conservative ideals of Faith and Freedom. He used his executive power to decrease the number of regulations. He has nominated justices that believe in holding the Administrative State accountable to the Constitution. During COVID, he promoted federalism, holding back federal government power so that governors can take care of the needs of their individual states. A progressive in his shoes would have expanded the administrative state and the federal government given that opportunity.

All political arguments in this country come from how we understand our Declaration. Conservatives have upheld its spiritual and philosophical foundation of equality and inalienable rights. Progressives have taken an evolutionary stance, rejecting the founding fathers’ vision as a mere moment in time. In the midst of this, President Trump has worked against evolutionary progressivism, striving to Keep America Great with its founding ideals of Faith and Freedom.

Faith and Freedom: The Foundation and Ideals of America was last modified: June 17th, 2020 by Guest Contributor Robert Cook

Robert Cook is a candidate for Presidential Elector in the 6th District. He received his MA in Government and Political Communication from Johns Hopkins University, and is a secondary History and Government teacher, who has been involved with the GOP since he joined the Rockbridge Area Republican Committee in high school.