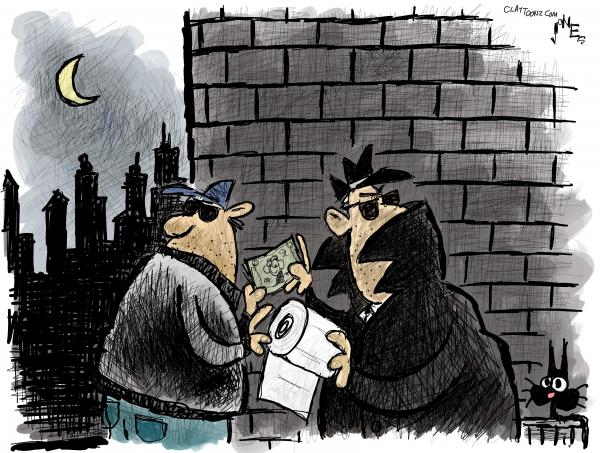 Let’s have a show of hands here. Everyone who ever heard of Dr. Anthony Fauci before the middle of March, please raise your hands… Anyone? Hello????

Nope, I never heard of him, either. Overnight, Dr. Fauci has become a national figure – a real media-star. The president defers to his advice on the Corona-epidemic. Reporters ask him how bad the epidemic will be, and how long it will last. They want to know when the country’s economy can restart. Can it ever be restarted? Will we have Round 2 with the virus? Can we expect a new shutdown when that occurs? Etc., etc.

In response, the Doc issues ever-higher projections of infections and deaths – with each new model-generated estimate scarier than the last. He says we might have 240,000 deaths in the USA – maybe a million, or even 2 million – and he warns that we’ll have a replay in the fall. He and other medical experts – who seem to regard the nation’s economy as “not their department” – recommend a nationwide shutdown of movement and commerce. This has already wounded the greatest economy in history, and will crash it completely if we let it go on much longer.

In my previous article, “Model-mania”1, I pointed out that projections produced by climate-models are questionable because the assumptions – and even the data, in some cases – which go into them are difficult (or impossible) to verify. Costly public policy should never be based on such projections.

This caution should also apply to epidemiological models. Basing draconian public policies on projections calculated by models that employ unknown assumptions – which in some cases are only educated guesses – and incomplete data can lead us to economic disaster. This is already happening. Data are one thing; model projections are another. Both do not have the same cachet.

Old guys like me, who have seen an epidemic or two, look at these projections of a million or more dead and ask, “Can this really be true?” Even the great Spanish flu pandemic2 of 1918 wasn’t this bad, and we’ve got a century of medical research and experience behind us now.

Am I arguing that the Corona-virus isn’t dangerous? Not at all. Medical professionals of my acquaintance say the virus is highly contagious, and that infected individuals remain contagious longer than with other viruses. But those pros are keeping mum about the projections we’re seeing on TV. Modeling is not an exact science, and in some cases it might not be science at all.

Retired modelers, including yours truly, are watching our political leaders’ uncritical acceptance of these model-generated predictions with a (very) jaundiced eye. Is this for real? Or is something else driving the scarier and scarier predictions that have our economy on the ropes?

I see two important factors pushing these increasingly scary predictions. I’ll probably get hell for saying this, but I think one factor is “fame.” As I have noted in other articles, the media’s operative question is always: “Where’s the conflict.” Tranquility and good order generate no TV appearances and sell no newspapers. Reporters want “death, injury, blood and pain.”

Disaster-experts like Dr. Fauci and others of his pedigree work under the same discipline. Right now they are – as the TV producers at poolside like to say – “hot properties.” Liberal media love them because they are predicting doom, which means wreckage of the Trump economy. Last week I heard some info-babes gushing about Dr. Fauci and proposing that he be voted “sexiest man of the year.” I admit that this gives hope to old guys like me, but is this serious “reporting?” If you want to know why public trust of Big Media is in the dumpster, look no farther.

All seriousness aside though, these hot properties – suddenly plucked out of obscurity and thrust onto the national stage – know that once the epidemic is under control and the economy is humming again, they’ll go back to being invisible. No more news-conference appearances, standing next to the president. No more bantering with comely hostesses on TV news-shows. As they say in the news-biz, “It’ll be over, baby.”

So…in their place, what would you do? Pronounce the epidemic “under control” as soon as possible, and publish diminishing mortality-rates? Tell everybody to be careful, but say that it’s safe to go back to work?

Or would you try to draw the emergency out just a little longer? (Just to be safe, of course.) Maybe keep it going for several months, or even a year? Warn that we’ll have to go through the whole thing again, in the fall? Say that we might never return to status quo ante?

‘After all,’ you might say, ‘we’re just looking out for the safety of the American people. Does anyone really mind taking an extra two- or three-month vacation? Where’s the harm?’

Most of those doctors and health-officials probably haven’t calculated things so crassly. But wouldn’t some new media-stars be tempted to keep the scare going? I’m sure most of them are above that, but fame can turn anybody’s head. Last I checked, we’re all human.

And doesn’t that go double for reporters who have hit the big time by hyping the medical, social and economic effects of COVID-19? Do they want it to end? (Seriously?) Nobody becomes famous by reporting that all is well. Normalcy is not a story. And Fame is a powerful tempter.

The second factor pushing today’s epidemic-hype is politics. (I shock myself by even saying it.) Even Hottentots in Africa know that Democrats have waged a relentless political war against President Trump since before his 2016 election. That war has continued through his entire term, right up to the present day. All previous efforts by Mr. Trump’s enemies’ to knock him out of the ring have failed, so now they have weaponized the Corona-epidemic for a final blitzkrieg to try to unseat him in November.

Despite everything that Democrats (and even some Republicans) have thrown at him – including the ugliest Impeachment proceedings in our history – Mr. Trump has done wonders. His roaring economy – featuring historically low unemployment, soaring income levels, and a booming stock market – has amazed the world and confounded his enemies. It has always been the ace in his re-election deck. But now, miraculously, the Corona-virus has given those enemies a golden opportunity to upset Mr. Trump. It seems too good to be true.

Of course, Mr. Trump’s closure of the nation’s commerce and his recommendations that most people stay home have caused some of the economic damage. Unsurprisingly, the economy has ground to a halt and thrown hundreds of thousands out of work. Economists say millions more will lose their jobs if the shutdown lasts much longer.

At first, Mr. Trump said the shutdown would last only until Easter (April 12th), but last week he was persuaded to extend it until April 30th. As the unemployment figures for March have been released, media-organs have joyfully joined in predicting the worst economic crash since the Great Depression. Some say the epidemic is “Trump’s Katrina.” And one commentator said, “Another Republican administration, another recession…” (So much for all “pulling together.”)

But we should know by now that Mr. Trump doesn’t stubbornly stay with a strategy when the situation changes. At this writing, with much lower model-projections emerging, he has begun to speak more urgently about putting the country “back to work.” Top administration-officials say that a second Corona-panel – now being formed – will concentrate on restarting our commerce.

Meanwhile, Democrats in the House of Representatives have followed Rahm Emanuel’s famous maxim of never letting a good crisis go to waste. With machine-like precision, Nancy Pelosi’s House majority has cranked out “stimulus” bills that have not only added over $2.5 trillion3 (i.e., $2,500,000,000,000) to the national debt, but have also contained a carload of goodies drawn from the progressive wish-list. These have included:

(Is this a great country, or what?)

Most of these radical items were cut from the final bills, but some probably survived. At this writing I have been unable to determine which items became law.

To my knowledge, no medical crisis in our history has ever been used to wound a sitting president or to enact proposals that could never be approved in stand-alone votes. To say that this is a dangerous precedent hardly conveys the peril it represents to our republic. If we continue in this way, we won’t be able to put the pieces back together.