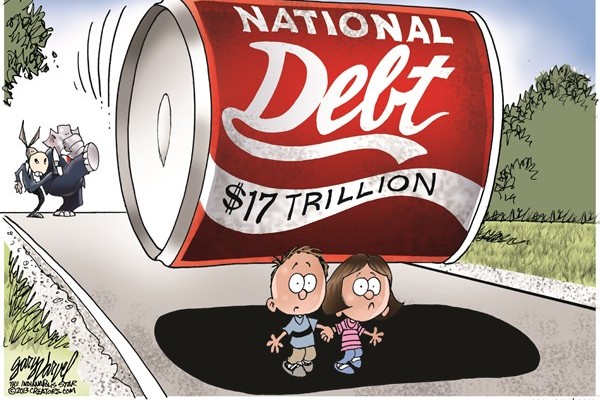 What should you be worried about? The Zika virus? The Zombie apocalypse? Well, according to the Washington Post, it is not our astronomical and growing national debt. “Economy & Business” section posted an article by Wonkblog on Saturday, April 16 with the nonsensical title “The debt: An enormous number you shouldn’t be worrying about.”  (The title has sense been changed online.) The thrust of the article is that Jim Grant and other ne’er do wells raise fear of the national debt to justify cutting government spending, and maybe, as an excuse to cut taxes. The article amazingly concludes “so there is no reason to cut the debt today, and no reason to cut the government down to pre-New Deal size. “ This conclusion is based on some research that shows non-farm unemployment was higher from 1880 to 1933 than since 1946,so the large national debt has been good for us.

Where to start in this field of strawmen? Cut the government to pre-New Deal size? No one pushes for that. The author argues that since interest rates are low, investors are happy to continue lending the US money, so why care? Think of the US as having taken out an enormous adjustable rate mortgage, with a low introductory rate. And we just got a credit card offer with no interest due for years, so let’s spend that up to the limit too.

What could go wrong? Well, while rates are low now, there is no guarantee they will be low tomorrow. Foreign lenders could stop buying bonds – or sell them, as Saudi Arabia has threatened. More than 1/3 of our total debt is owned by foreign countries ,lead by our buddies China (what do you mean, we don’t own the South China Sea). If they stop buying, rates would go up, unless the Fed steps in and buys the bonds. No worries, the Fed , which already owns 12% of our debt could buy even more. Go ahead, print more money, it always works (e.g. Zimbabwe, Venezuela).

The CBO estimates that government spending will increase rapidly as more boomers retire, health care cost increase (thanks, Obamacare), not to mention defense and, oh yeah, interest on the debt, which increases as the accumulated debt grows, even if interest rates remain low. So even if the current debt is somehow ok, we still need to borrow hundreds of additional billions every year.

High debt levels also impede growth.  The period mentioned in the article, 1946 to date, includes long periods when the economy was growing faster than the total debt, with post-World War II debt of just over 70% of GDP dropping to only a little over 30% in the 70’s.  Since 2000, the debt has gone from about the post-war average of 55.2% to over 105%.  As Reinhart and Rogoff found in their exhaustive study of financial history: “This Time is Different, Eight Centuries of Financial Folly,” high levels of debt lead to slower growth.

So the US has an $18 trillion adjustable mortgage, and many trillions in “off balance sheet” items, such as various government trust funds, loan guarantees and others commitments(e.g. social security, medicare).  And our income (GNP) isn’t going up as quickly as the debt is growing, thanks in part to the high debt load.  What happens if the US dollar loses its status as the international reserve currency or foreign countries don’t want to lend us money?  What happens if inflation increases and interest rates rise?  If we do nothing about the debt now, it will require that much more painful actions in the future.  The US economy will find itself in a very difficult position where government spending must be cut and taxes raised.  A lot.  I’d call it something to worry about.

When the chickens come home to roost, one can only hope that someone gather’s together all these “The debt: an enormous number you shouldn’t be worrying about” quotes and sets them to music on Youtube.

“We will not have any more crashes in our time.”

It is surprising what a non-issue the national debt has become in this round of the Presidential primaries. While Ron Paul was never a serious contender last time, he certainly directly and indirectly controlled the conversation and financial issues were front and center. I think we are past the point of no return with the debt. Deficit spending will continue until a complete collapse…but that could be 20, 50, or a 100 years from now. Who knows how long the charade can continue? The Democrats don’t believe there is a problem and the Republicans, while tepidly acknowledging its existence, don’t do anything about it out of fear of being cast as the bad guy and lose votes. So, we merrily continue down the stream heading to the waterfall.