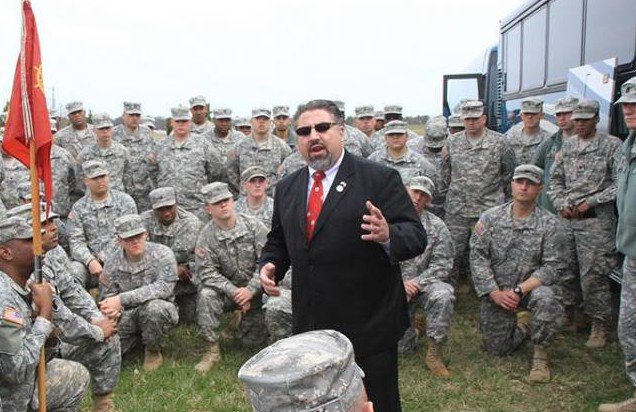 Fearlessness: One of the many reasons we love David Ramadan

Over the weekend, as many TBE readers will know, Donald Trump alleged via Twitter that the Republican Party of Virginia (“RPV”) was controlled by shadowy power brokers at the RNC, and that as a result of that nefariousness they had instituted measures to exclude Trump’s voters:

It begins, Republican Party of Virginia, controlled by the RNC, is working hard to disallow independent, unaffiliated and new voters. BAD!

Trump is referring to adoption by the RPV of a requirement that voters in the upcoming March 1 GOP presidential primary state that they are Republicans before being allowed to participate. You see, in Virginia there is no voter registration by party, and state-run primaries in Virginia are open to all registered voters. But, under the Virginia law governing presidential primaries, the parties may require that voters indicate some affiliation with the party before being allowed to participate in selection of the party’s nominee. Just like in most states, where voters register by party and participate in primaries open only to members of that party, Virginia Republicans have exercised a right to allow only Republicans to choose the Republican nominee.

Trump is only the latest and most high profile critic of this move. Radio talk show host and frequent The Bull Elephant guest contributor John Fredericks has lambasted the new requirement, as have numerous respected and not-so-respected denizens of the Virginia online Republican/conservative/libertarian community. Reasonable people can disagree.

There was only one Republican leader, though, who was willing to take on Donald Trump, and that’s Loudoun Delegate David Ramadan.

Whether you agree or disagree with the policy on the statement of affiliation—which reads quite simply, “By signing below I indicate I am a Republican”—Trump’s criticism of it as an RNC plot was inaccurate and hyperbolic (and disingenuous,to boot, as his campaign was made aware of the proposed policy before it was adopted back in September, and voiced no opposition until now).

Delegate Ramadan, in any case, was having none of it, and fired back at Trump. What followed that was a torrent of hundreds of Tweets from Trump supporters attacking Ramadan. Many of these Tweets were racist and threatening, as detailed in this piece by Betsy Woodruff at The Daily Beast, calling Ramadan a “terrorist” and insinuating the Lebanese immigrant was some sort of a Islamist mole secretly penetrating behind enemy lines.

What utter, hateful garbage. We’ve dealt with this kind of thing before, but it’s really a shame that the first item in their rhetorical toolbox that some of these folks reach for is the childish, simplistic, fearful rejection of anyone who has a funny name or doesn’t look like them.

Ramadan is the perfect example of how misplaced this kind of unthinking anger can be. He is a very successful, well-educated husband, dedicated family man, and small business owner who contributes significantly to the local economy. He followed all the rules to come here, and desired very much to become a naturalized U.S. citizen. He has worked for GOP candidates for decades, tirelessly supporting our fight to preserve our freedoms. He’s unabashedly pro-American, and rides an American-flag festooned Harley. He’s a walking embodiment of the American Dream.

He joined the legislature to continue that fight, and won in an immigrant-heavy district by practicing an unparalleled brand of retail politics (which, BTW, should be a model for how other Republicans approach conservative-leaning immigrant communities around the country). After just two terms, Ramadan is leaving public service, for now. Like he showed with Trump, he’s not afraid to fight the big dogs, and some of those big dogs made clear he was no longer wanted as a thorn in their side in Richmond.

This is the kind of Republican we conservatives should be praising. Whether you agree with Trump or not on the Virginia GOP statement of affiliation, the kind of fearlessness this guy continues to show is nothing short of marvelous.

Thank you, Del. Ramadan, for your years of faithful service to our party, the Commonwealth, and to our country. As you near the end of your service in the General Assembly, we want to let you know you will be missed. We look forward to the next chapter in the very American story of your life.

Fearlessness: One of the many reasons we love David Ramadan was last modified: December 29th, 2015 by Chad Ochocinco
David RamadanDonald Trump
44 comments