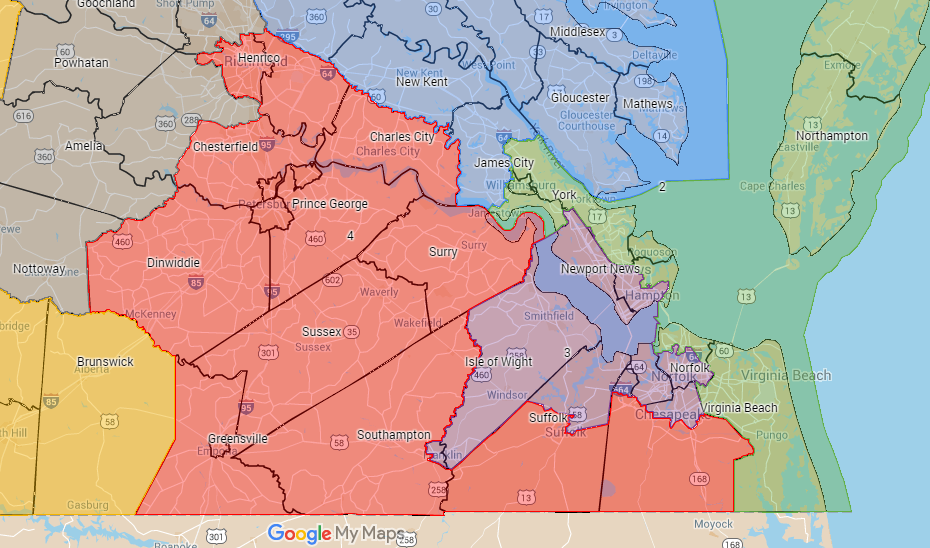 AsÂ The Bull Elephant has reported extensively before, the courts in a redistricting lawsuit foundÂ Virginia’s 2012 drawing of the Third Congressional District to haveÂ impermissibly included too many African-Americans.

Now, despite the fact that the case remains on appeal to the Supreme Court of the United States, the federal district court for the Eastern District of Virginia has ordered adoption of a map put forth by a special master appointed by the court. Â The map has significant changes for the 1st, 2nd, 3rd, 4th, and 7th districts.

The map as adopted is embedded below. Hit the zoom button for closer detail.

The largest impacts are to the 2nd, 4th, and 7th districts. The 2nd District loses some Democrat-leaning areas of Newport News and Norfolk, and pick up heavily Republican areas around Williamsburg, Yorktown, and Poquoson. What the 2nd loses goes to the new 3rd, and what they pick up comes from the 1st.

The 3rd District no longer extends from Hampton Roads to Richmond, but is instead much more tightly drawn around Norfolk, Newport News, Hampton, and Chesapeake. Most of what it gains comes from the 4th, and vice versa.

The 4th loses a large swathe of territory to the west of and south of Richmond composed principally of Amelia and Nottoway counties [UPDATE: and Powhatan…how can I forget Mighty Powhatan?], which goes to the 7th. The 4th also loses Isle of Wight and Franklin City. It picks up parts of Henrico, Richmond, Charles City, Surry, and elsewhere.

The 7th loses New Kent and Hanover to the 1st District, and picks up the western losses of the 4th District. It also picks up a small additional area of Henrico from the old 3rd. This doesn’t look likely to upset the applecart for the brewing contest between Dave Brat and Henrico Sheriff Mike Wade…but see below.

Here is a more colorful rendering of the new district lines:

Overall, this is probably bad news for 4th District Congressman Randy Forbes, whose district just got a whole lot tougher to win. The 1st and 2nd remain in the solid and leans Republican categories, respectively. The 7th remains solid, but the question is whether the new lines prompt Randy Forbes to seek happier hunting in a primary against Dave Brat, as some folks who are less than enamored with the freshman congressman have speculated. Color me skeptical on that one.

The Bull Elephant will have more comprehensive analysis of the changes in the coming days, including an analysis of the potential for the maps to be overturned by the U.S. Supreme Court. In the meantime, the Times-Dispatch has more here (but without maps).

Is the GA asking for a stay from SCOTUS?

This is nothing short of a disaster…

It’s cataclysmic. Calamity! Ruin! Virginia — nay, our world — will never be the same.

These new lines are all about a placeholder for the upcoming Supreme Court review. The judges and the Democrats are hoping the Supreme Court will look at the new lines and say, “these aren’t so bad,” and let them stand. They may have messed up, however, as the new 3rd no longer looks to be a majority-minoirty district, which would leave VA without any majority-minority districts.

Wasn’t the point for minority groups to have two majority-minority districts? And now Blacks may end up with no districts?

How about we scrap crap like that and focus on making the districts reflect best possible localities. And let’s make them smaller — it’s too easy to buy 435 — lets see how they do with a few thousand.

I’m curious what the Obama 2012 share of the two-party vote is in the new districts. VA-1 was 46.2%, VA-3 was 79.8%, VA-4 was 49.3%, VA-7 was 42.3%. The one district that should have gotten more Democrats was the overloaded 7th, and it would have if the “Republican” legislative leaders had bothered to put their own map together. If Forbes isn’t back next year, that’s who he can thank.

I’m glad to see the old 3rd go. It was an ugly piece of gerrymandering.

The only problem with the old map was that there were too many Democrats in the Rigell, Forbes and Comstock seats.

Still are in the Rigell and Constock seats.

No district changes in NOVA?

That hardly seems fair, how about if the 10th gives them our Fairfax portion?

Awesome, you got upgraded to a much more conservative congressman.

so Brat has years of experience working with the ins & outs of Ft Pickett? of course, Ft Pickett is not only impt to Nottoway, but to VaNG, FASTC, US Army training, State Police & other groups.

No one starts with years of experience with anything. But he believes in doing what is right and serving his constituents. If those two thing line up then all bets are off. If you were in the 4th district, Randy Forbes is a terrible conservative.

Why should the democrats mess with a reliable vote?

Democrats are not a reliable vote in 10th district which is Northern Virginia.

Who was talking about a democrat?