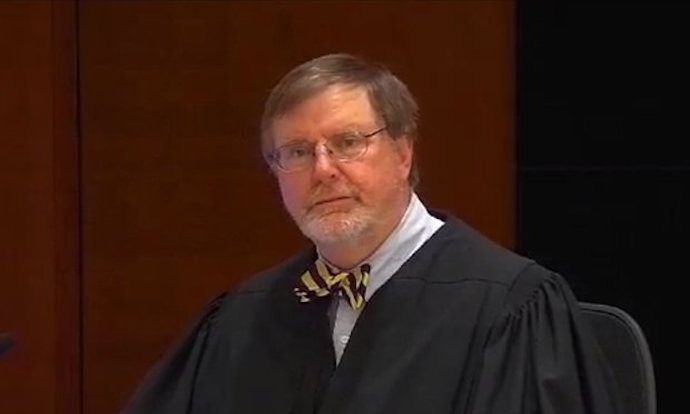 In an astonishing ruling issued on February 3, 2017, George W. Bush appointee James Robart stayed President Trump’s order temporarily suspending nationwide the admission of persons from seven listed countries, including Iran. Judge Robart in so ruling engaged in a fact finding spree that was not in the record nor is it supported by publicly available news sources.

“I have to determine whether the executive order is rationally based…grounded in facts as opposed to fiction.”

Judge Robart erroneously asserted that no foreign nationals on the list of nations, including Iran, have been arrested within the borders of the United States. This is why judges should not second guess the foreign policy issues behind executive orders. Iran is on the list for a reason. Two Revolutionary Guard members tried to assassinate the Saudi ambassador to the US in Washington DC using explosives, an event which if it was not detected might have resulted in the maiming and deaths of innocent American bystanders. The judge said zero Iranians have been arrested in the US since 9/11. He was wrong. These two Iranian citizens were …arrested in New York and sentenced to 25 years in prison.

As if that isn’t enough, the present government of Iran has been directly responsible for the deaths of hundreds of Americans since 1979, the year in which Iran’s undeclared war against the United States began. I will name only a few: US Embassy Bombing, Beruit, April 18, 1983; Bombing of US Marine Corps Baracks in Beruit, Lebanon, October 23, 1983; Torture and Murder of Beruit CIA Station Chief William F. Buckley, June 3, 1985; Torture and Murder of US Navy SEAL Robert Stethem, Beruit, June 15, 1985; Torture and Murder of US Marine Corps Col. William Higgins, Lebanon, July 16, 1990; Khobar Tower Bombing, June 25, 1996; Attack on US Forces in Karbala, Iraq planned by Iranian Revolutionary Guard leader Major General Qasem Soleimani, January 20, 2007; and numerous American troops wounded and killed by Revolutionary Guard supplied explosively formed penetrator IEDs as ordered by Soleimani.

I personally thought this order was poorly written and issued without much forethought of the consequences of making a pubic announcement on a Friday night and stranding travelers. That being said, we can’t have judges engaging in unwarranted fact finding sprees that don’t comport with the truth.

Federal judge rules Iran is not a threat to the United States was last modified: February 7th, 2017 by Dave Webster

[…] As I previously pointed out, in much more detail than the Executive Order does, there is ample evidence for Iran to be on the list of suspect countries. http://thebullelephant.com/federal-judge-rules-iran-is-not-a-threat-to-the-united-states/ […]

Let’s look at where the power to do this comes from shall we? This is INA 1182f:

(f) Suspension of entry or imposition of restrictions by President
Whenever the President finds that the entry
of any aliens or of any class of aliens into the United States would be
detrimental to the interests of the United States, he may by
proclamation, and for such period as he shall deem necessary, suspend
the entry of all aliens or any class of aliens as immigrants or
nonimmigrants, or impose on the entry of aliens any restrictions he may
deem to be appropriate. Whenever the Attorney General finds that a
commercial airline has failed to comply with regulations of the Attorney
General relating to requirements of airlines for the detection of
fraudulent documents used by passengers traveling to the United States
(including the training of personnel in such detection), the Attorney
General may suspend the entry of some or all aliens transported to the
United States by such airline.

Boy it sure seems pretty clear that under the Immigration Act, President Trump has the power to impose restrictions and travel bans, no? Ok, let’s play liberal and ask further whether this ban was rational…

“In December 2015, President Obama signed into law a measure placing
limited restrictions on certain travelers who had visited Iran, Iraq,
Sudan, or Syria on or after March 1, 2011. Two months later, the Obama
administration added Libya, Somalia, and Yemen to the list, in what it called an effort to address “the growing threat from foreign terrorist fighters.”

I would guess that would seem to support a rational basis for the ban from these countries… note COUNTRIES, not Muslims.

Jeanine – the title of this article is misleading and inflammatory. This isn’t a discussion of conservative issues, it’s a string of unsupported assertions and facts that are not related to refugees admissions.
TBE is clear about its status as an unmoderated forum. It should also be clear about its willingness to promote muckraking. Or stop promoting attempts to muckrake.

Ms.Jeanine,
Sometimes we let our hearts roll with comments on your site.
At time others have invoked thought from a different persons experience or heart , for that I am thankful to you for this site and allowing us a true freedom, a freedom of speach.

My President is reasonable to an unreasonable threat that continues to poke holes in our defenses that protect the America.

To good!
This is a perfect article for Saturday night live skit;
Robert Deniro terrorists names, is one of the funniest thing I have seen.

“This is a perfect article for Saturday night live skit;”

Iran thinks they are a threat to the USA, and that is good enough to me. This judge will get americans and her allies killed and not just here but around the world. The message sent isn’t one of the importance of the law but of political cowardice.

Yes. Because closing our borders to refugees is the epitome of courage.

I did realize you favored invading Mexico.

Totally agree with this article. This judge was legislating from the bench.

This is a time wasting exercise, there’s no way Democrats actually win this one.

If they want to go against Trump they should choose battles they can win. Delaying his appointments, taking him to court over a power Congress has obviously delegated to him, etc, is a wasted effort.

Trump will take this appeal all the way to Judge Judy if that is what it takes.

Judge Robart asked “Have there been acts of terrorism by refugees or other immigrants from the seven countries” (38:10) and “Have there been arrests of foreign nationals from those seven nations since 911” (39:20). The DOJ lawyer was unable to respond, and DOJ’s appeal over the weekend offered no facts.
If DOJ had access to any facts, they could have protested and cited classification of sources and methods, but they didn’t.
Either DOJ needs to hire the author, or the author’s information doesn’t apply. Either way, that isn’t the judge’s fault.
https://youtu.be/4WYSTyrK71U

It is his fault when he is basing his ruling in part on something which is false.

He based his ruling on
1. Basis for temporary relief from immediate and irreparable harm. Texas used $13.00 per drivers license issued to block an Obama policy. Washington used monetary impact of foreign students and faculty who would be stuck overseas.
2. Plaintiffs would be likely to succeed. Based on success of other cases including Texas v US, the judge felt this condition was met.
3. In the public interest. Based on stranded students and faculty vs DOJ’s inability to present facts to the contrary, the judge felt this test had been passed.

False is the assertion that “bad dudes” who could fake their way past an 18 month process with one week’s notice are somehow not going to past the same security measures they were already beating a week ago. https://uploads.disquscdn.com/images/522c116e77d0ffb313f8757a73c5eb53cc9d3e4363af183a2c830a47fe69968e.jpg

It is not up to the judge to determine if the executive order will deter terrorists. That is not his job. The President has access to classified information that the judge does not. Yes, it is true the judge ruled that the plaintiffs had a substantial likelihood of success in the merits but he never said why he thought that. Another reason his ruling should be overturned. https://www.justsecurity.org/wp-content/uploads/2017/02/Seattle-Court-Order-19717309322.pdf

He didn’t rule based on the ban’s efficacy. Yes he did say why. He grilled Washington on why and they cited precedents including US v Texas.

The classified information line might have validity if DOJ said ” we need to brief you…”. Mechanisms exist for disclosures like that. But DOJ didn’t do that. All the wishful thinking and conjecture can’t change that.

Watch the tape. The judge focused narrowly as was his job.
https://youtu.be/4WYSTyrK71U

Surely you don’t think a judge should make his private thoughts the basis of a ruling. He cited no case law or factual findings for his unsupported conclusion that the plaintiffs had a likelihood of success on the merits. Litigants should not be required to guess the gravamen of a ruling. The reasons for any ruling must be set forth in writing.

We can’t be watching the same court case. I feel the subject of precedents was addressed in the video. Did you watch it? (Hasn’t been an hour since I sent the link, and the video lasts over an hour…)

Bottom line — the judge made no pronouncements on Iran as a threat. DOJ failed to allude to classified Intel, or the events the author lists. The judge expressed his 3 criteria and why he felt the temporary restraint was warranted.

The Staye of Washington’state lawyers have copied and pasted the technique applied in US v Texas. Are you protesting that case’s judge, or is that ruling acceptable because the plaintiffs were Republicans? You can’t have it both ways.

At this point in time I am going to invoke the Schoeneman Rule and stop responding to your comments. This is a rule which posits that it is permissible to stop commenting when it becomes apparent that no matter what is said, how logical the arguments are, or what the indisputable facts are the critic will continue to make comments until the end of time.

Won’t hurt my feelings. I just hope you also stop writing based on fantasy. Watch the entire video I linked. Better yet. Turn a news channel on and listen to the arguments live.

Trump’s folks released a list of in country terrorist attacks.

I don’t understand why DOJ even followed them down that rabbit hole. The President has wide discretion in visas, etc, he doesn’t have to run off and get permission from the courts to do what he did. When the courts asked DOJ about incidents, etc, DOJ should have just told them they had no interest in discussing it with them, that the President had made the determination that it was necessary and that’s the end of it. The court is trying to second guess the President of the United states, from freaking .. what, Seattle ? Where the hell are these people even at, on the west coast somewhere since their jurisdiction is the 15 west most states. The point is that these judges were probably out buying groceries with their kids and watching Seinfeld reruns over dinner, WTF are they doing involving themselves in decisions that the the President gets briefed on daily ? It’s like watching someone in accounting tell their corporate CEO that he can’t build a skyscraper because the accountant thinks they’re ugly, I mean WTF. The court has absolutely no business involving itself in whether or not the ban was a good idea or not, the people decided that when they elected the President.

Yes, stop arguing with him… it is useless. I guess he didn’t call you a racist yet.