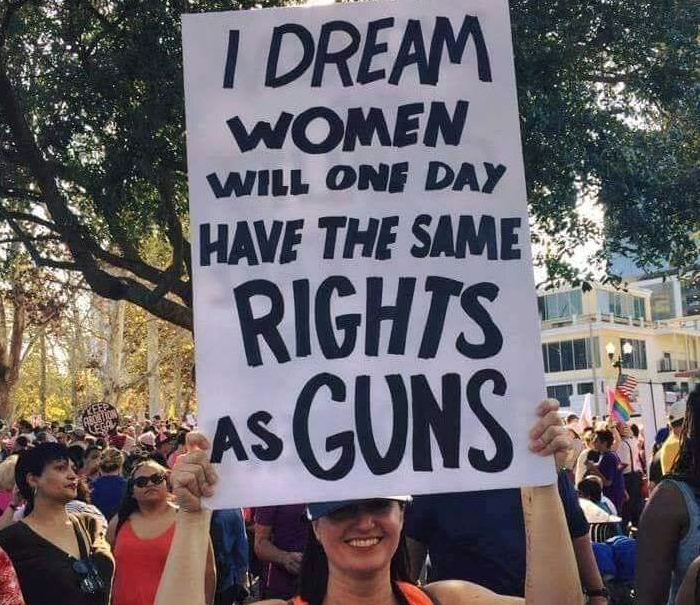 Check out the above picture.

This is how bad it’s become for liberals.  The feminists want the same rights as “guns”.  So let us all give women the same rights as guns according to both federal and Virginia laws.   Because after all, they are much more brilliant than we are and we are unable to think clearly.  And away we go:

Let’s lock up women when not in use

Let’s ban women from airplanes without filling out a form and paying a $200 tax.

We should keep women away from children

Felons cannot have a woman.

Women shall be 100% banned in New York and Chicago.  Any man who owns a woman in NYC shall be put in jail for up to 3 years.

Women must be severely restricted in Hawaii and California.

No women in a restaurant if her owner has consumed alcohol

Women cannot be carried without a special permit

Women shall be barred from having certain popular accessories

A man can own multiple women, but can only purchase one woman a month unless he/she has a permit to purchase more than one woman.  Said man can only buy a woman if he has 2 government issued ID cards.

And they call us deplorable and unable to think.

(Remember, these come to you through your feminist activists – not from any conservative)

I have met many Muslim women at work and in the community. Many are wives and mothers and dress modestly and sometimes I do feel that they are looking to their husbands for ‘permission’ to say anything. On the other hand many are doctors, business owners, and community leaders who carry and exercise great authority very well.

And your point is? Do you not recognize that you have professed to observe the very behavior described in the article. How about you go through the article item by item and check off those things that do not apply to muslim women. I did just that and was amazed by how many things on the list could replace gun with woman. Thus my observation.

I have DONE that work that is important: INTENTIONALLY getting to know some Muslim women to learn about their lives. NOW you DO THAT! DO IT NOW!

Thanks for this fun satire. Well deserved by people ignorant of 2A rights. We can also make a similar satire about ignorant Republicans. For example, ‘we dream of the day that Republicans love and work hard to protect’the born’ as much as they do’the unborn’.

If you imagine that A) The “caring gene” is exclusive to asses and unknown to elephants; and

B) That the only way to project “caring” toward any given group identity is to increase its dependence on government largesse,

you are part of the problem, “caring” or not.

You completely avoided the OBVIOUS point (we thought it was obvious):

that MANY DEMOCRATS are obvious hypocrites when they hold scared SOME (1A) but not all (not 2a) Constitutional protections.

that MANY REPUBLICANS are obvious hypocrites when they hold ‘the unborn’ sacred but not treating ‘the already born’ as sacred.

I wonder if you have ever heard the phrase “Half a loaf is better than none”.

WTF does bread baking have to do with Republicans making PAGAN FETISHES of ‘the unborn’. Are you trying to call pregnancy the old phrase ‘a bun in the oven’?

Re-read for comprehension – your willingness to set groups apart for victimhood marks you as a “progressive”.

Your attempt at balance wasn’t worth a comment, given the above.

OH, you mean ‘victimhood’ such as Jesus of Nazareth’s list of them in Matthew 25? …

I do not indulge in any victimhood-isms other than that which Jesus described in Matthew 25: that nations must support the vulnerable, the traumatized, etc.

You actually can’t see where you sort people – individuals – into classes that you can then declare victims or potential donors to victims.

America is not built on group rights, no matter how much you might want it to be.

…and while we as Christians are called to love our neighbors as ourselves, the chapter you’ve chosen isn’t a very good example of that concept, since Matthew 25:40 refers to fellow Christians, and not to the unchristian poor or inmates…

The scripture of Matthew 25 CLEARLY AND DIRECTLY states:

QUOTE – NRSV in English translation
31 “When the Son of Man comes in his glory, and all the angels with him, then he will sit on the throne of his glory. 32 All the nations will be gathered before him, … the king will say to those at his right hand, ‘Come, you that are blessed by my Father, inherit the kingdom prepared for you from the foundation of the world; 35 for I was hungry and you gave me food, I was thirsty and you gave me something to drink, I was a stranger and you welcomed me, 36 I was naked and you gave me clothing, I was sick and you took care of me, I was in prison and you visited me.’
UNQUOTE

Interlinear Bible states that the the term ‘nations’ in the Greek – ‘ethnos’ – has these meanings (WHICH ARE NOT WHAT YOU SAY IT MEANS!):

a multitude (whether of men or of beasts) associated or living together
the human family
a tribe, nation, people group
in the OT, foreign nations not worshipping the true God, pagans, Gentiles
Paul uses the term for Gentile Christians

So, the judgement – described by Jesus of Nazareth – recorded in Matthew 25 COMMANDS CLEARLY AND DIRECTLY THAT ‘the nation’ – e.g. the AMERICAN PEOPLE, the UNITED STATES, etc – will be judged by the standard Jesus gave.

NOT, as you state, blasphemously, that the standard is only regarding care for ‘fellow christians’.

HOW SHAMEFUL IS SUCH BLASPHEMY! You should take care of what you say because this teaching is ABOUT THE JUDGEMENT! THE – as in ‘THE’ – Judgement.

Please don’t presume to judge me based on your simplistic interpretation of a corrupted “bible”.

The categories in Matthew 25 (in keeping yet again with your leftist insistence on lumping individuals into groups so that the government may tax and/or reward them) do not pertain to all people, much less all nations: They pertain, in the specific context of Matthew 25:35-36, to the community of believers, both Christians of means and the Godly poor.

…and here is some commentary for you to wrap your statist head around:

YOU HAVE NOT explained away the preface to the commandment. The judgement is of the nations. If Jesus has seen God’s judgement to be a judgement of ‘believers only’, or a judgement regarding how one cared for ‘believers only’ it would have said so in THE PREFACE. The preface describes the setting of the judgement CLEARLY AND OBVIOUSLY: ‘the nations’ are gathered. Believers are among the people in any and all nations. They have a special duty to inform ‘the nations’ about God’s coming judgement and that God’s judgement will regard the treatment of ‘the least of these’:

QUOTE
Then they also will answer, ‘Lord, when was it that we saw you hungry or thirsty or a stranger or naked or sick or in prison, and did not take care of you?’ 45 Then he will answer them, ‘Truly I tell you, just as you did not do it to one of the least of these, you did not do it to me.’ 46 And these will go away into eternal punishment, but the righteous into eternal life.”
UNQUOTE

The pleasure was all Andrew Olson’s

Well, we already know that Democrats will protect neither so anything Republicans do is should be an improvement. By the way, it is Democrats, namely Sanger and company, who proposed the extermination of an entire race. Republicans have a long way to go to match that.

Again and again and again you make the EXTREMELY UNHELPFUL logical error of arguing that what someone else did makes what you do OK. IT IS NOT OK for Republicans to fetishize ‘unborn children’ and to abandon ‘born children’. Margaret Sanger, Joan of Arc, or the Transperson in the Moon have NOTHING to do with it.

But Democrats have everything to do with that. The inner cities are almost entirely enclaves of abandoned born children who are abandoned because of the policies of Democrats. Republicans don’t have the power or resources to compensate for the messes made by inner city Democrats. And, frankly, neither does the church.

At one time charity was the answer – and then the government decided to politicize charity as a way of garnering votes. Now questions of life and death for babies and children is nothing but a game of oneupmanship. Every day I read, “I am a compassionate Democrat. See, here is a messed up kid and I can use him or her for a one time photo op. Watch me look lovingly at the kid and even put my hand on a shoulder.”

Really? This passes for discourse here?

Scintillate us with your rhetoric, jackass-man.