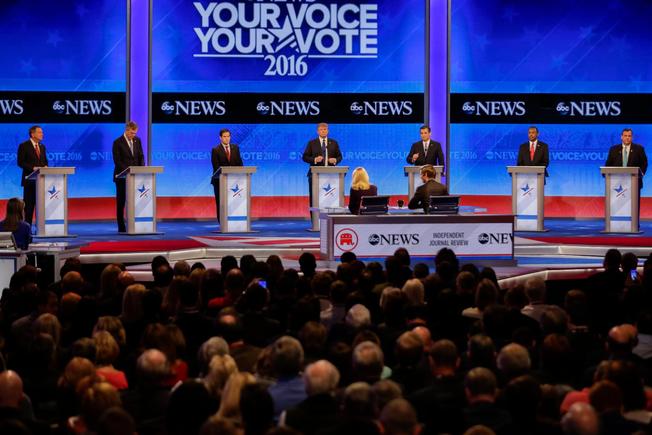 The last debate before the New Hampshire primary was filled with flubs and fireworks.  The three top contenders all took their turns in the crosshairs, with some handling the spotlight better than others.  The three Governors, sensing their campaigns are on life support, really tried to step up their game.  Oh…and Ben Carson was there.

Marco Rubio played the expectations game after his third place Iowa finish to announce his “Marcomentum” and the media played right along.  He wanted the attention, and he certainly got it in the form of Chris Christie, who hammered him mercilessly for using “25-second memorized campaign lines.” Rubio promptly responded to that criticism by…repeating the exact same 25-second memorized campaign line over and over again in the space of a few minutes.  It really must be seen to be believed.  Here is the full exchange for you to watch.

What made the moment worse was that Rubio should have been ready for it.  He wanted the spotlight and so should have expected that he would come under attack.  Not only that, but Chris Christie had been telegraphing this punch all week, calling Rubio the “boy in the bubble” for the way his campaign has been carefully scripted.  The fact that Marco walked straight into this shot and was not prepared for it was very surprising.

Marco was able to “reboot” and get back on message for the rest of the debate, but it didn’t seem to matter.  The only thing anyone is talking about is his “Rick Perry moment“, and how bad it will hurt him.  You can read about it here, and here, and here, and also here, and over here…ok, one more here.

Donald Trump claimed he had the best temperament to be President, then shushed and talked over Jeb Bush during a dust up on eminent domain, and insulted the audience in the debate hall because they were booing him.  The polling front runner, who just last week admitted to Joe Scarborough he had never heard of a “ground game” before, got hit hard on his strong support for liberal use of eminent domain.  He tried to focus on the use of eminent domain for public purposes, but Jeb Bush brought the issue back to where it belongs, with Donald Trump’s support for the Kelo Decision, which allows private property to be taken and given to a developer for so-called “economic development” use.

The Donald seemed to rebound, and was left alone for the most part during the debate, but lost whatever goodwill he tried to win back by taking yet another “Ted Cruz cheated in Iowa” cheap shot during his closing remarks.

Speaking of Ted Cruz, the night started out a little rough for him when he was predictably put on the spot about his campaign spreading the story published by CNN that Carson was heading back to Florida after the Caucus instead of going on to New Hampshire.  Ted gave a straight up answer, explained he had apologized to Carson, and even apologized again to Carson right there, defusing the situation.  After that, the Texas Senator was given numerous pointed policy questions which he answered with detailed, thoughtful policy answers.  His response to a question on drug abuse was riveting as he related his personal story of the loss of his step-sister to drug and alcohol abuse.

Cruz is a seasoned debater, and even when Martha Raddatz tried to get into the debating game with him, Cruz was able to handle her with ease and without getting flustered.  Ted was not the main target of the night, and he used that fact to his advantage, staying on message and not launching attacks on anybody.

Chris Christie figured it was fight night in Manchester.  He took the most shots of the night and was aiming regularly at Marco Rubio, but his line about the difference between being a Governor and being a Senator is almost as repetitive as Marco’s canned 25-second responses.  He also hurt himself when he declared himself pro-life, but then announced his support for abortion in cases of rape and incest, even going so far as to call it a “self-defense” abortion, whatever that means.

Jeb Bush and John Kasich probably had their best debate performances to date, and with their campaigns in danger of ending, it was the best time for it to happen.  At one point, the two of them had a tag-team love fest where Kasich would give a positive message, and mention Jeb favorably, and because Jeb’s name was mentioned, he would get to respond with a positive message and mention Kasich favorably, which would give Kasich the chance to respond…lather, rinse, repeat…this went on back and forth a number of times before the moderators put a stop to it.

The last point I want to highlight was a moment where my mouth just hung open in stunned disbelief as no less than THREE candidates on the stage (Rubio, Bush, and Christie) declared their SUPPORT for having young girls register for Selective Service (that’s the draft, folks).  You read that right.  Marco Rubio, Jeb Bush, and Chris Christie want your daughters to sign up for the draft.

To offer a little background, Obama’s Defense Secretary, Ashton Carter, recently ordered that all billets in the military, including infantry and armor, be open to women who qualify.  In response, a bill was offered by Rep. Duncan Hunter (R-CA and former Marine) and Ryan Zinke (R-MT and former Navy SEAL) that would require women ages 18 to 26 to sign up for the draft.  Memo to Rubio, Bush, and Christie: HUNTER AND ZINKE DON’T REALLY MEAN IT!!!

The bill is only designed to force a conversation about the extreme levels the Obama administration is taking the politically correct indoctrination of the military.  Unfortunately, these three candidates fell into the trap set for Hillary Clinton and Bernie Sanders, which has to call their judgment into question.  I don’t want a Republican President ordering my daughter to sign up for the draft.

The main story of the night, though, has to be Rubio’s failure to live up to his moment in the spotlight.  Had he been able to handle tonight’s debate with calm and grace, he would probably have solidified himself as the establishment standard-bearer and banished the three Governors to primary limbo.  As it stands now, we shall have to wait and see just how bad Rubio hurt himself.

Be careful what you wish for, Marco.  You just might get it.

Rubio is getting shredded for his “Marcobot” moment. How did Rubio not know it was coming because Christie has been hitting Rubio for memorizing a 20 second speech and just regurgitating it over and over. I was surprised when it came up in the debate Rubio wasn’t able to handle it. It’s like watching Obama hugging his teleprompter

What is Cruz’s stance on women registering for the Selective Service? I’ll drop him like a hot potato if he supports it.
Selective Service should be abolished. If we can’t get enough willing participants, we don’t deserve to exist.