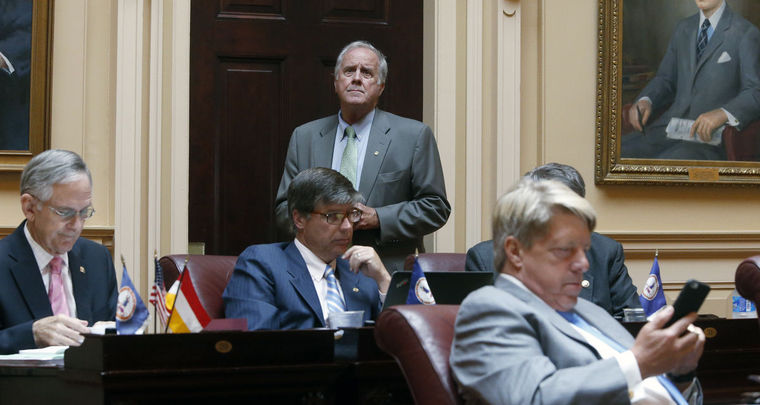 Fight Over VA Supreme Court Yields no Winners. Judge Alston was rejected for the Virginia Supreme Court by the Virginia Senate sitting in a special session.  Judge Roush, who was a recess appointment of Gov. McAuliffe, will leave her position by law 30 days from the date of her appointment.  The Virginia Supreme Court will likely be short a Justice at least until January.     One Republican Senator (Watkins) voted with the Democrats and the tiebreaking vote was cast by Lt. Gov. Ralph Northam. Allegations of sexism and racism have flown back and forth.  Both Judges are high caliber jurists known for fairness.  EVERYONE in this scenario looks bad.  McAuliffe: I’m shocked — shocked! — that they wouldn’t give her the time of day, her day in court.”  Yes, we are all buying your sincere reaction.  “I’m embarrassed for the citizens of the Commonwealth of Virginia,” McAuliffe said.

Me too.  Sources: Washpo RTD

Clarification – because the Democrats rolled the GOP on procedure yesterday, the Senate adjourned (rather than simply going into recess). That means McAuliffe will be entitled to make another recess appointment until the GA reconvenes in January. So SCOVA will probably not be a justice short. He’s said he’ll re-appoint Roush. Remember, all 140 seats are up this November and while there’s little chance of the Dems retaking the House, the Senate is still very much in play.

I did catch that (the ability and plan to reappoint) later in the day after posting. Having a Justice that will be leaving every thirty days, possibly never to return, makes it hard to write opinions and otherwise rule on cases. Justice Roush will be assigned to an oral argument panel, possibly hear the oral argument, then not be on the bench at the time an opinion is issued. The whole situation is FUBAR and everyone looks bad. Thanks for your clarification.

McAuliffe is taking a page out of Obama’s playbook by ignoring the law that says the legislature picks the Supreme Court Justices and using his phone and his pen instead. Even former Democrat Gov. Wilder rebuked McAuliffe for his actions. The Democrats were referring to Rouche as a Justice, even though she hasn’t been selected. WTOP noted that on the Supreme Court web site, it says her term is up 2027 even though she has not been selected yet. The Democrats are the party of lawlessness, plain and simple.