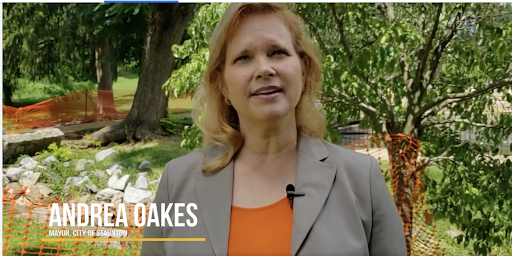 Fighting intolerance and discrimination against conservatives in Staunton

More and more, local newspapers are stifling free speech and expression from Conservatives and non radical leftists by refusing to publish Letters to the Editor by people who support conservative causes.  One of the main offenders in this has been the Staunton News Leader, which has gained a reputation among non leftists in Staunton for trying to suppress free speech on its Op-Ed page by only printing letters written by radical leftist activists.  While the Staunton News Leader is not the only local news paper who does this, the News Leader is among the main offenders when it comes to only printing one side of a story.

Andrea Oakes is the Mayor of Staunton Va.  Mayor Oakes is a dynamic young lady with a positive vision for the future of Staunton.  And one thing about Mayor Oakes that the liberals in Staunton cannot abide by is, Andrea Oakes is clearly not a leftist nor does she have anything in common with the radical agenda that the leftists have.  Amy Guffy Darby, and several others were elected to the Staunton City Council in May of 2020, and they have been the target of the left ever since.  And interestingly enough, lately, the Staunton News Leader has been accused of not printing Letters to the Editor in support of Mayor Oakes, Councilor Darby, and their colleagues.

A couple of weeks ago, Yvonne Wilson, an African American female who is considering running for the Staunton City Council in 2022, wrote the following Letter to the Editor to the Staunton News Leader.  Since the News Leader would not print this letter, it seemed only appropriate that we print it here.

“I want to tell you a story about a 3-year-old girl. The town in which she grew up was about to desegregate their public schools. Her father—who was the mayor—had a huge hand in implementing this momentous change. But this little girl also witnessed the worst humanity had to offer. Due to her father’s efforts in desegregation, his family had paid a price. People spat on them every time they went out. They were called n-lovers and publicly ridiculed and harassed. A kidnapping attempt was made on this little girl’s nine-year-old brother. The Klan attempted to burn a cross in their yard. On the day that this little girl’s father was supposed to walk the first black student into one of the public schools, a brick was thrown through their living room window. The harassment got so intense, so invasive, so dangerous…that the little girl and her mother had to have a police-escort every time they went to the grocery store. All of this and more happened just because her father stood for the right of all citizens—no matter the color or race—to receive an education. The father who stood against racial injustice was Ronald Williams.

Once again, Mayor Oakes is accused of racism for “misusing” a quote from Martin Luther King Jr. The reason why she used the words of MLK was not to commandeer nor usurp his significance in civil rights. She used these words because the very tense political and social climate currently is fomented by anger, frustration and deafness. We don’t listen, we scream. We don’t defend, we judge. We go to church and to our spiritual circles preaching and praising tolerance—yet we come out of them praising and preaching intolerance. Baseless accusations of racism are weaponized to shut down the opposition, which denotes that the accusers do not have an argument. It’s not doing this city any favors, and it doesn’t build bridges. You want unity? STOP FEEDING THE BEAST OF ANGER AND OFFENSE.”

For the record, I have had the privilege of meeting Mayor Oakes on many occasions.   She is a lovely young lady who is smart (both book smart and street smart), knows how to run a meeting, and how to get done what she wants to get done.  I can say the same about Councilor Darby as well.  Being a Member of the Strasburg Virginia Town Council, I tend to view things differently than does the average citizen.

One can agree or disagree with Andrea Oakes’ politics.  But people really need to stop tossing around the words like racist any time they meet someone they disagree with.  As a person who has experienced the worst of racism in my life, I can say with great knowledge that Mayor Oakes, Councilor Darby, and their colleagues who came into office in Staunton in May of 2020 are the farthest things from racists you will ever see.  And Mrs. Wilson’s LTE which the News Leader would not publish are proof positive of what everyone in Staunton already knows.

Staunton needs more like Mayor Oakes and Councilor Darby.  And in 2 years, that will be Councilor to be Yvonne Wilson.

Fighting intolerance and discrimination against conservatives in Staunton was last modified: February 12th, 2021 by John Massoud