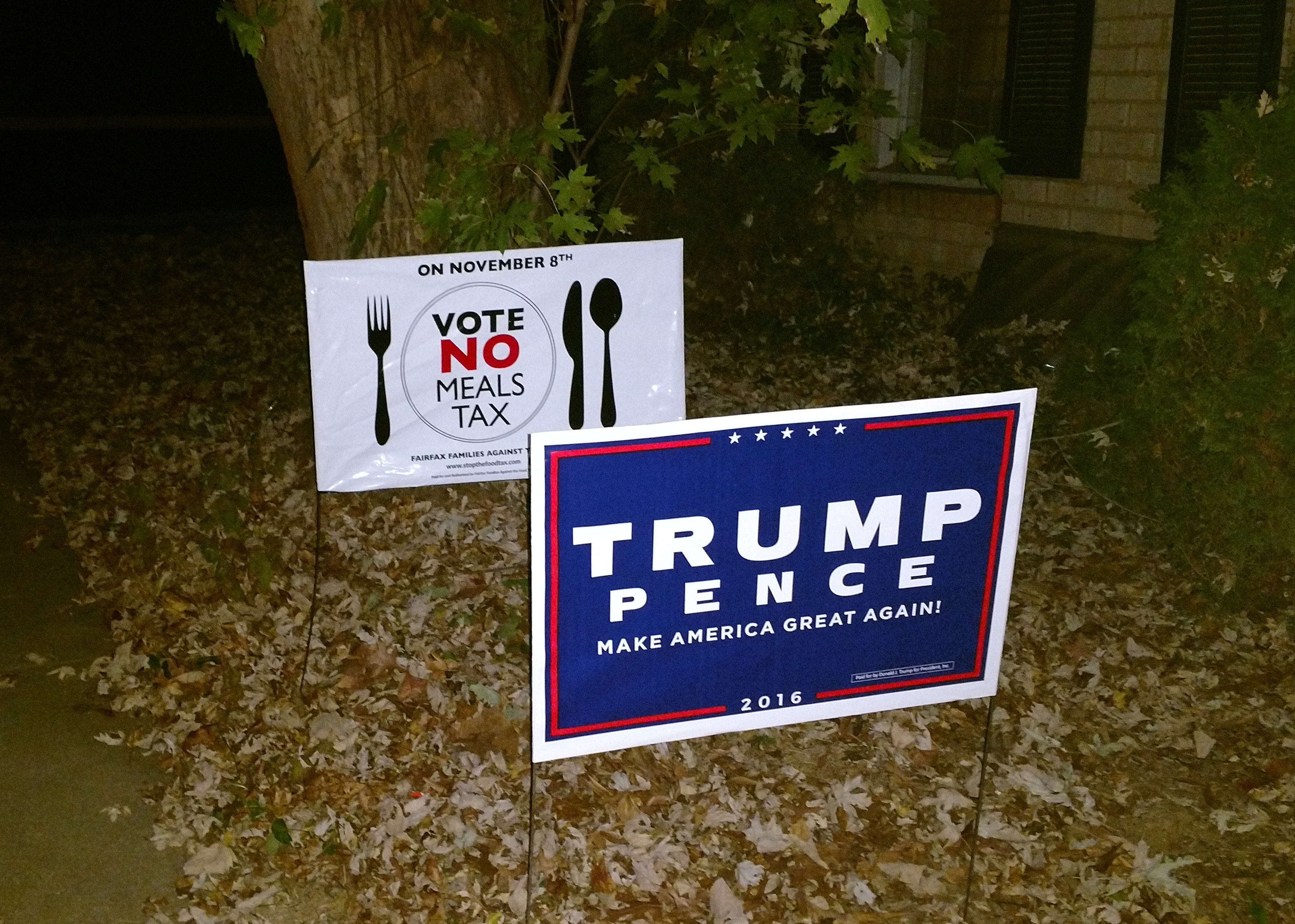 Final Thoughts for Election 2016 from the 11th District

Polls are garbage.  There is only one poll that counts, and that is the general election.  In 2013 there was a concerted effort by pollsters to show how devastating a loss the Republican ticket would have on election day.  Instead of a ten point victory on election day for McAuliffe we had less than a two point victory.  For AG the race was almost imperceptibly close.  Polls are being used by the MSM to crush Republican spirits.  In a Presidential race this is hard to accomplish.

Virginia is in play: Living and electioneering in NoVA one gets the impression that Trump doesn’t have a chance.  Other parts of the state must make up for the margins in the Commonwealth’s largest county.  Pulling out 45% in Fairfax is a game changer.  Working early absentee voting in one of the most liberal areas of Fairfax I saw support for Trump from working class women in uniform getting off their shifts, I saw immigrants before heading to work, I saw older women explain to the Democrats how they wouldn’t vote for a criminal in the White House, I saw African-American mothers having picked up their children from school supporting Trump and explaining to their children the voting process, and yes I saw tons of white men confidently expressing their support for Trump.  Trump is different and he has a chance here.  I do not believe he will win by a large margin but Virginia is in play.  The proof is undeniable.  Hillary is spending money here.  Trump and Pence are spending time HERE.  In the final days before the election the Republican ticket is spending its most precious commodity.  If you can, get out and help, especially here in Fairfax.  Fairfax County could have turned two statewide races in the past four years.

Pennsylvania is in play:  I largely grew up in Pennsyltucky.  This is the great “T” that makes up most of the land mass of Pennsylvania between Philadelphia and Pittsburgh.  This is a mixture of rust belt, rural, and small town America.  This area reliably votes Republican, but this year they are over the top for Trump.  Pittsburgh has no love for Clinton, and the Philadelphia suburbs have a distinct lack of enthusiasm.  This is a Commonwealth that elected Rick Santorum statewide multiple times.  Based on what I see plus critical looks at polling I think Trump has a better chance at Pennsylvania than Nevada.

Could the right to work ballot measure be written in a more confusing manner?  Through a conglomeration of federal and state law, in non right-to-work states you must pay dues to unions to work in certain jobs.  We do not have such a system here in Virginia.  If you want it to stay that way, vote yes on Constitutional Amendment 1.  If you like the perpetuation of unions, or just want to leave right-to-work as an open issue subject to change at the whim of the General Assembly vote no.

In Fairfax County Republican are fighting against a meals tax referendum.  Democrats know deep down that this is about “diversifying revenue sources,” by targeting a subset of the commercial base and sapping nickels and dimes from regular people.  They are selling it as a funding mechanism for schools.  This is inherently deceptive.  Even if all meals tax revenue went directly to funding schools there is nothing preventing the County from offsetting school funding from the general funds by any meals tax revenue.  The schools receive a funding package every year based on projected needs far in excess of any meals tax revenue.  Additionally, you inevitably have less of anything that you tax.  There are two guarantees from the meals tax, 1. The County will receive some amount of additional revenue that is not actually guaranteed for schools, and 2. restaurants and sellers of prepared foods will see less total revenue resulting in less profits AND JOBS.  The meals tax is a revenue solution for a spending problem.  The Fairfax Board of Supervisors is trying to trick people into buying into higher taxes without suffering their own electoral consequences of voting to raise taxes themselves.  Don’t fall for it.  Vote no on the meals tax.

Cameras, the tool of the devil:

The State Board of Elections said you can use cameras in the voting place.  This will increase transparency, and quite frankly, lead to a more enjoyable participatory democracy.  The concerns of elections officials about disruption or control over the voting environment are overblown.  The concerns about paying for votes are overblown (couldn’t this occur before ballot selfies were “legal?”).  I witnessed just recently, devilish David Ramadan himself took a picture of part of his ballot and posted it on Facebook.  There is one thing I have to say about using cameras in the polling place, it’s about time.

Final note: Those of you reading TBE are registered voters, I’m not worrying about you turning out to vote.  Please take the time to help Trump get elected, support your Republican candidates, and support conservative positions on ballots measures by helping on Tuesday.

Final Thoughts for Election 2016 from the 11th District was last modified: November 5th, 2016 by Paul A. Prados
Cameras in Polling PlacesMeals TaxPencePennsylvaniaTrump
49 comments