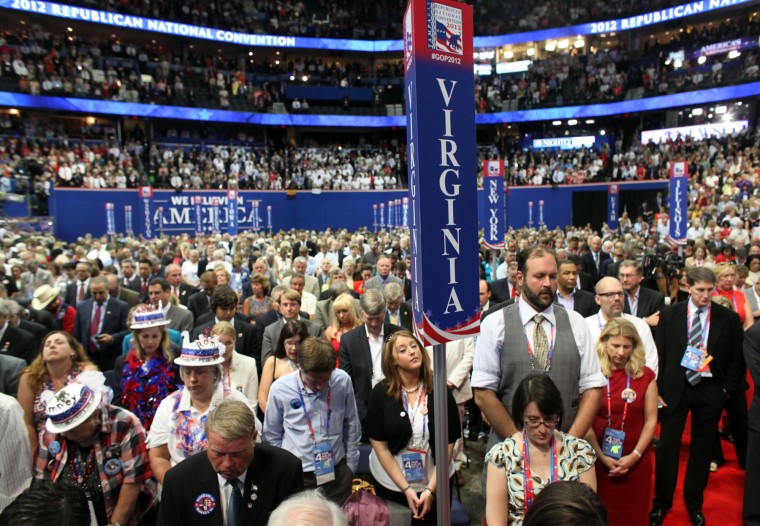 I am the only person not yet to weigh in on the Presidential Primary v Convention fight yet, so I will get the last word here.

1. Did anyone actually READ the King v Burwell decision Thursday? Two relevant points here. One, we got Obamacare not because of Justice Roberts, but because we failed to make the argument necessary to beat Obama and repeal Obamacare. We actually participated in The People making bad decisions here. Which leads me to the second point, which is that the King decision mentioned Massachusetts’ Romneycare no less than 10 times in justifying Obamacare’s existence.

So what did Virginia do in 2012, by a very flawed primary? We nominated the guy responsible for the model for Obamacare. That alone should be a lock down argument against a presidential primary. It nominates losers like Romney and McCain who can buy a win. But you can’t buy love in a convention.

2. But in fairness, we only had two choices that year. Why? Because our primary system in Virginia is fundamentally broken. Democrats can participate (and by some surveys, up to 20% of Â primary voters are crossovers). The burden to get on the ballot is sky-high. No party registration. They are expensive and state-paid. They draw at best 6% of Registered voters- meaning in actuality they are NOT that inclusive!

Until these dysfunctional issues are actually dealt with in the GA, State Central should never consider a primary again.

3. This is a delicate point, but one which bears thought. Many of the well-meaning Republicans making the case for a primary are trying to make the case that it will help us win.

I have already written at length about why ‘electability’ is a bunk criterion and very subjective, usually used to justify a moderate like John McCain or Mitt Romney who loses. But while I have deep respect for the well-intentioned folks who make this case, one has to question the value of their advice when many of them come from parts of the state where Republicans just don’t win. Typically when looking for advice on how to win, it might be better to look to folks from parts of the state where Republicans DO win- listen to their counsel and replicate that model.

All this is to say that what we KNOW is without a doubt, primaries have been sure losers for us for several years now. Let’s try something different to get a different outcome. Vote Presidential Convention in 2016, SCC.

This is incoherent drivel. Best of luck to you, Steven.

No agenda here but these cross over party voting estimates seem to be all over the map percentage wise. I keep getting the sense that no one really can present a quantified presentation on what the scope of the issue really is in a plain statistical model. I did look at a couple “surveys” and frankly to call them guesses would have been a fairer depiction. If this is such a problem why hasn’t it been in the interest of the RPV to undertake a detailed study to understand the scope of the issue? With the appropriate software and some data mining tools I think this would be a doable job perhaps not totally precise but very close. Given the number of complaints on this issue it seems it might be worth the investment to gather some facts to hail down the scope of what is actually occurring.

Well, he’s also including self-declared “Independents” in surveys as crossover votes. A lot of independents are reliable Republican votes who simply have been turned off by the party in the past decade, so it’s important we do everything we can to make sure they know they’re not welcome.

This piece totally ignores two aspects of the 2012 election. First, the incredibly weak field of non-viable candidates the GOP put up that year. Second, the conservative primary vote was split between Paul, Gingrich, and Santorum, while Romney was able to “win” states with a plurality. It used to be conservatives were smart and rallied behind one or two candidates. Now, we have 15 to choose from.

Hopefully, as a new transplant to NoVA (and working on a campaign here, no less), for your clients’ sake you’ll realize quickly that this is the big leagues, and unlike the rural parts of the state it takes a lot more than having an (R) next to your name to win a general election.

I have news for you. What Fairfax Republicans have done lately hasn’t worked. At all. What winning campaigns do is win the argument. That will be the difference.

Well let’s see, Ed Gillespie used the same argument across the state in 2014. In Spotsylvania County, that message was good enough for 60% of the vote. In Fairfax, it earned him 40%.

So what’s the difference between Spotsy and Fairfax? The overwhelming number of Democrats who live and vote here. It’s not a campaign issue, or a messaging issue, or a tactical issue. “Replicating the model”, as you suggest, for winning in a place where Republicans always win has little bearing in a county where Mark Warner exceeded 70% of the vote in 20 precincts.

Ever wonder why there are so many Dems here? No one is giving them a viable alternative.

And FYI I lived in NoVA for six years before moving to Spotsy- so I am no newbie.

Primaries produce both winners and losers.

Conventions produce both winners and losers.

This is the worst argument for either side to try to use.

And not to put too fine a point on it, but there is a less than 0% chance that any of the also-rans in 2012 would have defeated Obama in the general election. Who would you have voted for in a convention, even nevermind that most of them have dropped out at that point? Herman Cain? Rick Santorum? Newt Gingrich? Let’s stop kidding ourselves: the 2012 primary was not ideal, but that has absolutely nothing to do with the nominee we ended up with.