According to the latest Quinnipiac poll, Obama is seen as the worst President since World War II and Ronald Reagan as the best.  Currently more people think Romney would have made a better President than Obama, 45% to 38%.  In the most recent Zogby poll Obama’s disapproval is at 54% with an approval rating of 44%.  More than half of the people told Zogby that Obama is “unable to lead the country.”  The latest Gallup Poll shows the President’s disapproval rating of 54% with an approval rating of only 40%.  All of the recent polls on Obama’s job performance can be found here. 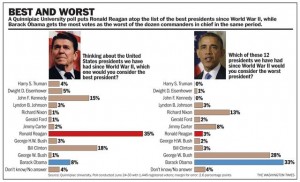 For every poll, there’s an equal and opposite poll.

So how does Obama stack up against his most immediate two-term
predecessors as they marked their sixth Independence Day in the White
House?

Would you let an affirmative action clown run your business?

The worst President in the history of the USA is George Bush 43. There can be no question about this.

Let us not forget that almost 3,000 died in an attack inside our own country. 2 wars, one under false pretense. $4 gasoline. Total collapse of Wall St. and subsequent Bush bailouts. The loss of millions of jobs. Just for starters. All under Bush 43.

You simply have no credibility when you write this propaganda, and do the same thing to Obama, that you accuse others of doing to people within your own Party in your next article. None what so ever.

You should apologize to your readers for this lie. What will you write next?

Jim, I believe all that her post did was to REPORT the results of a poll. But if you were looking for an excuse to unload on Bush, I guess this was as good an excuse as any.

She knows what she is doing. I stand by my comment.

George Bush 43 destroyed America . Bob McDonnell may have done the same with Virginia, we will see.

I think that Speaker HB 2313, and Sen. Safari should both get an assist.

Let’s let the DOJ finish up with the grand jury regarding recent events.

Remember, it is the Republicans who always say no to ethics $egislation in the GA.