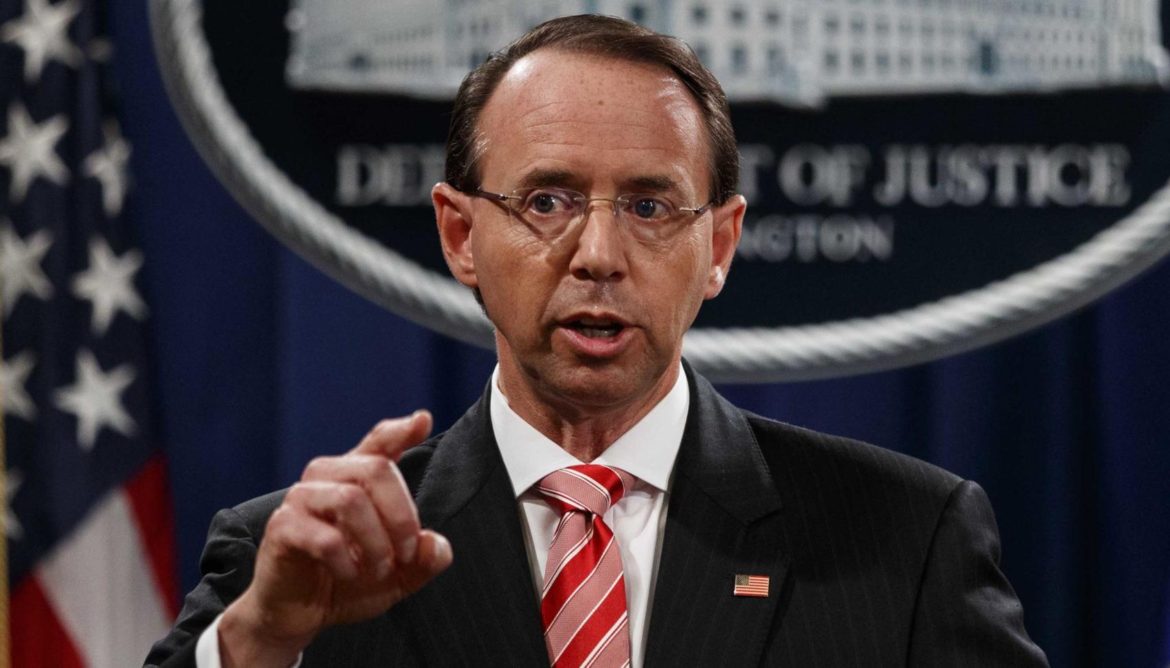 Two members of the House Freedom Caucus, Rep Mark Meadows (R-NC) and Rep. Jim Jordan (R-OH), have filed articles of impeachment against Deputy Attorney General Rod Rosenstein.  Nine other Congressman are co-sponsors.  They are accusing Rosenstein of refusing to turn over documents Congress has been requesting for nine months.  From Vox.com:

For 9 months we’ve warned them consequences were coming, and for 9 months we’ve heard the same excuses backed up by the same unacceptable conduct,” Meadows said in a statement. “Time is up and the consequences are here. It’s time to find a new Deputy Attorney General who is serious about accountability and transparency.”

The resolution accuses Rosenstein of the following, also from Vox.com:

I am no fan of Rosenstein, but Congress seems to be playing with fire with impeachments in tandem with the Democrats insanity over removing President Trump. Impeachment needs to be reserved only for high crimes and misdemeanors. Yes, Rosenstein should cooperate more, but it’s doubtful they’ll get a majority in the House to impeach. They certainly will not get two-thirds to convict in the Senate.

Looking more and more like collusion. No wonder they are trying to discredit the investigation. Traitor Trump.

This is long overdue. Frankly, I have to think this was GOPe colluding with the enemy (Democrats). Clearly the special council was a giant data gathering exercise that gave them carte blanche into all things Trump and let them dig up as much dirt as they could and feed it to the Democratic Machine for future use. It is my belief that the GOPe was and is happy to let the sham of an investigation continue because it will help the Democrats defeat their common enemy: Donald J. Trump. GOPe got the Democrats to do their dirty work.

I blame Sessions for allowing things to get this bad. Rosenstein has obviously been mixed up in the anti-Trump coup and should have been removed much earlier. Now this becomes another knife in President Trump’s back.

Agreed. Sessions didn’t want to get in the middle and did some serious CYA by recusing himself. It was classic risk avoidance by a politician.

How did that little swamp scumbag get appointed Deputy AG in the first place? I might assume that the GOP Establishment was hedging on getting Trump too in the early days of his administration, but their plot failed for now.

If it is that important, should there be something to do?

I hope that Chairman Goodlatte will call hearings immediately and keep his committee in session until all relevant information is disclosed.

The House began their 5 week vacation today. So nothing will happen anytime soon. ):

Yeah, I wonder why Jordan/Meadows were such cowards?

How are they cowards? They did the right thing – that does not make Jordan and Meadows cowards – it makes them patriots.

You mean it’s really all CONservative political theatre then? Imagine!!