After two years, the case to recall Louduon Supervisor Eugene Delgaudio came to end on Tuesday in Leesburg when JudgeÂ Paul Sheridan dismissed the recall petition against Delgaudio on the recommendation of the democrat Arlington Commonwealth AttorneyÂ Theophani Stamos who said there was not â€œclear and convincing evidenceâ€ to move forward with a trial. Â The petitioners accused Supervisor Delgaudio of using his public office funds for political fundraising. Â They also objected to his views on gays. Â In making the dismissal recommendation to the court Stamos said,

“the Commonwealth cannot rely on conjecture, speculation, suspicions, and assumptions to support this extraordinary statutory procedure”.

â€œBefore the bloggers chime in, everybody should know this case ended because there was no evidence,â€ King said.

(We are certain that Charles King was not referring to The Bull Elephant when he made that statement.)

More on the end of this democrat witch hunt here,Â here,Â and here.

From Leesburg Today, Eugene Delgaudio and his attorney Charles King: 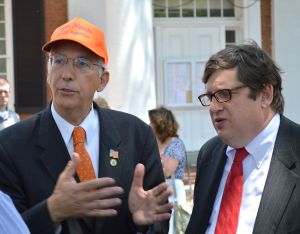 IRL he looks nothing like Michael Moore. It’s a terrible picture of Charlie King who is an excellent attorney in Leesburg.