The first poll in the race for Governor between Ed Gillespie and Ralph Northam shows the two in a dead heat, each receiving 46% of the vote.  The poll was conducted by Harper Polling. 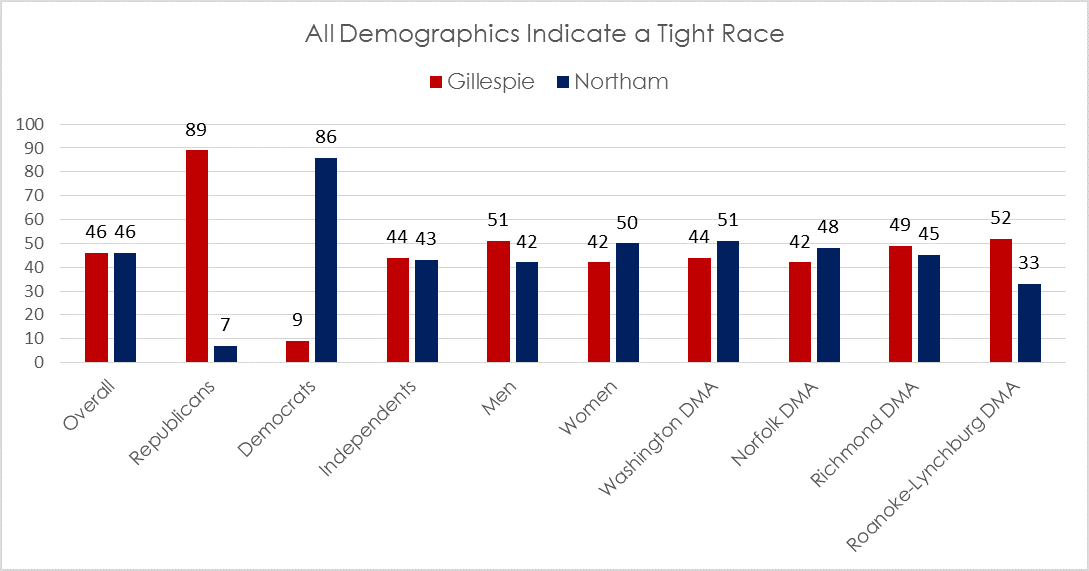 If Corey Stewart were to endorse and support Gillespie in a controlled, respectful manner, Ed would win for sure.

No, that is another establishment delusion. If Corey Stewart went on a hunger strike demanding that Corey’s voters vote for Ed Gillespie THEY WOULD NOT DO IT just because Corey asks them to.

Corey Stewart’s voters did not do and will not do what Corey tells them to do.

Corey Stewart could threaten to light himself on fire unless his voters vote for Gillespie and IT WOULD NOT WORK.

Ed Gillespie has to convince Corey Stewart’s voters that Ed Gillespie — after all the lies and broken promises of Republican establishment cronies just like him — will fight for them and their concerns.

That’s a pretty much impossible task. I don’t think Ed can pull that off.

Corey may have done all those things, but he’s not a unifier. He’s not nice. He lies. I wish he had been a better person – if that were the case, we could have saved Virginia from turning into Connecticut. Unfortunately, I don’t think the republicans can do it. The democrats know that and realize that our disarray and fractured party make us vulnerable. They will probably successfully take advantage of that. McAuliffe’s mission for our state will be complete.

GOOD! Why do we want a candidate who is “NICE?” Do you think that the “nice” candidate is the one who wins? If you show me your THEORY of how to win elections, I will show you your preferred candidate. We need to have an open discussion about HOW Republicans win elections in the general statewide. Apparently you think that “NICENESS” wins election. Tell that to Mitt Romney, George Allen, Ed Gillespie last time around, Bob Dole, even John McCain. Being “NICE” and a “UNIFIER” is a guaranteed way to LOSE the election. While those sound good at first blush, after digging a little deeper, those are euphemisms for losing tactics

Voters want someone who is going to FIGHT for their needs, like jobs. Someone who is “NICE” will back down and let the people causing our problems walk all over him. We don’t want nice.

Given what Northern Virginia has morphed into (Yankee-occupied and now a sixth borough of New York), Republicans such as Corey Stewart no longer stand a chance. Ed Gillespie is the type of reasonable center-right figure you can do well in Fairfax, Loudon, and Prince William counties.

That sure doesn’t say much for what Gillespie stands for if you believe he’s the kind of Republican who can do well in Fairfax, Loudon, and PW counties.

Sorry, Mark, but it just doesn’t (ever) work that way. That’s the delusion of establishment liberals. You can’t pander to Democrats by offering them a pale echo of the Democrat nominee. Given a choice between a bona fide, genuine article Democrat and a pale photocopy, those voters will vote for the genuine Democrat every time. You cannot win elections by “me too” campaigns that simulate the Democrat nominee.

If that kind of thinking (ever) worked we would have had President John McCain, President Bob Dole, George HW Bush’s 2nd term as President, President Mitt Romney, etc., etc.

How many times do “reasonable center-right figures” have to go down in flames before naive establishment Republicans have a light go off in their heads?

You would think that if only out of naked self-preservation the nitwit consultants and elected officials would notice that they always lose following their hairbrain theories.