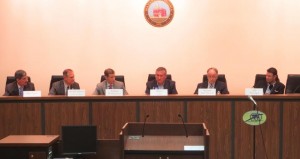 […] last week won the 10th District straw poll conducted by the Manassas Tea Party, which we reported here.Â  Though Marshall enjoys solid support in his home base of Prince William County, and also has […]

I appreciate your kind remarks about my performance.

With respect to your explanation, about not having a vetting process
for who are family, staffers, or tea party members, if you couldnâ€™t control the
process then perhaps you shouldnâ€™t have had a poll at all. Absent a formal vetting process, most, if not all parties that should have been excluded from the voting, were well known. In fact, Comstock employees were wearing campaign t-shirts. Not only did you do nothing to prevent the ballot box from being stuffed, you published the results.

I note your disappointment in my comments, but Iâ€™m not the type of
person who allows someone to take advantage of others. Iâ€™m a leader, not a
follower, which is exactly what the voters of the 10th district need. Leaders stand up against wrong.

Lastly, I never stated or implied any type of â€œconspiracy.â€ My comments
reflected what I called a â€œserious flaw in the process.â€ Please re-read my
post. Your comments validated the flaw when you stated, you didnâ€™t have a
vetting process.

Mr. Savitt, I wish you luck in your campaign. I think you’re a great guy with great conservative values and I admire what you’re trying to do. All the best.

Furthermore, Mr. Savitt, its true we don’t have a vetting process for who is family, who is a staffer, who is a member of the tea party, etc. Our only stipulation was that children couldn’t vote.

By the way, Jeanine, democrat John Foust was invited as well.

Unfortunately, I need to set the record straight regarding the Manassas Tea Party debate on Tuesday night.

First, each candidate with the exception of myself was accompanied by an entourage of family and staffers. These individuals were all allowed to vote. This serious flaw in the process was tantamount to stuffing the ballot box. Moreover, if you subtract family and friends from those who attended, the event wasn’t “well attended.”

I also find it interesting how one campaign had the results of the “poll” 24 hours BEFORE they were made public. Perhaps, it’s because the debate moderator was a committed supporter of that campaign. This same individual claimed I had not confirmed my attendance in advance of the event, until I produced an email confirming my acceptance to the debate.

As everyone involved in all the campaigns will verify, I have been extremely positive and supportive of the process. That is- until now! What took place on Tuesday night is something the Democrats usually engage in, not conservatives.

Second, as noted by all the candidates in attendance, this was the second time Barbara Comstock missed a debate. That’s two of the three debates. However, she made sure she had a sufficient amount of PAID staffers attend, so they could vote for their employer. We were told Barbara was attending a fund-raisers.

Lastly, another Tea Party straw poll was conducted Wednesday night in Frederick County. The candidates were asked to leave the room, so the members of the committee could vote. For obvious reasons family and staffers of the candidates were NOT allowed to participate. Although, the voting took place by a showing of hands and not paper ballots, I’m told I had wide support from these patriots. Excluding the ballot box stuffers was the right way to conduct this poll and I congratulate the leaders of this event for their honesty and transparency.

Mr. Savitt, let me set a few things straight, sir. First of all, who I support in my personal life is my business. I have been very careful not to use my position as chairman of our group to push any one candidate and if you asked the average member of our group who I support they would have no idea. I’m frankly not even sure which candidate you’re talking about. Secondly, we did not release the initial numbers to the entire audience last night because I didn’t want embarrass those who might have fared badly. But anyone who came up and asked was free to look at the numbers. Many people did. Had you or your staff asked to see them you could’ve done the same. We are a transparent organization and frankly I resent your insinuations. Lastly, while you were very gracious about it that night (your demeanor has certainly changed), it is true we were not expecting you. Everyone else’s email responses came through to our vice-chair’s email. Yours did not. Why, I have no idea. But to imply there was some kind of anti- Marc Savitt conspiracy is utterly ridiculous. But we scrambled to make sure we were ready. Jen drove back home to make a placard for you that looked like all the others because she didn’t want to have you sitting behind a hand-written one. Not knowing enough about you and your background (since we didn’t think you were coming), we came up with questions before the event that we thought would suit you. I thought you had a great performance and mentioned how impressive you were to a number of people. And your comments on this blog this morning are most disappointing.

I have noticed that being able to round up one’s family and friends for support is often a crucial element in the success of a campaign. In many ways it is a test of a candidate’s ability to rally support on a larger scale, a fundamental skill for a successful politician.

If they’re eligible to vote, then they are valid voters, even if they’re a candidate’s own spouse and children.

You’ve noticed Comstock always brings a crowd with her to any event where voting will occur. That’s no small part of what makes her successful, even though her politics stink and any person who takes 5 minutes to research her history can figure that out.

If you want a future as a successful candidate you must master this skill – if for no other reason than that the value of a committed core of loyal supporters is inestimable in a campaign.

So a word like “stink” is how you describe Comstock’s politics? Given the fact that far more divisive and fanatical words such as “murder” and “enemy of human freedom” have been hallmarks of your previous nonsensical anti-Comstock postings, I guess you should be commended for taking such an unexpected step upward on the civility scale. However, I have a feeling your reply will be the usual rehash of devolved anti-Comstock â€œliberty factionâ€ rage.

But in the meantime, donâ€™t let me stand in the way of Comstock haters (like you) having an opportunity to enjoy Marshall’s victory in this straw poll among his family, friends, and allied activists who just so happen to live in the middle of Marshall Country (just like his meaningless victory in this same organizationâ€™s 2012 Senate primary straw poll).