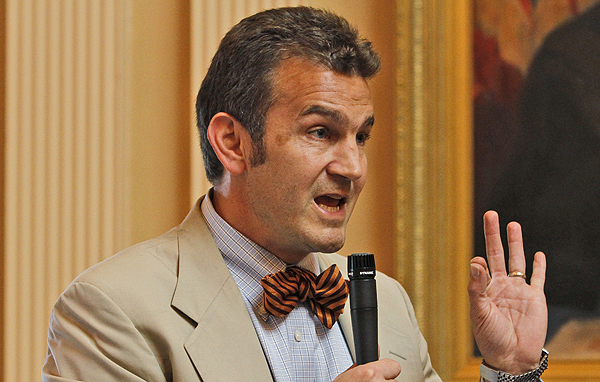 A Senate committee voted Thursday to spike a bill aimed at “expanding diversity” in Virginia’s governor’s schools, reports The Virginia Mercury. While it is encouraging to know that admittance into the governor’s schools will continue to be based on merit-based tests, the vote has a broader significance, which is even more heartening. It hints that a significant number of Democratic Party legislators are not entirely on board with Governor Ralph Northam’s policy of implementing policies informed by critical race theory throughout Virginia schools.

The stumbling point for several Democratic legislators is that they have many Asian-American constituents. Asian-Americans are disproportionately admitted into Virginia’s elite public high schools, most notably into Northern Virginia’s nationally recognized Thomas Jefferson High School for Science and Technology where they comprise 73% of the incoming freshmen. Asian-Americans have the most to lose from Northam’s definition of “diversity,” which requires admitting more African-Americans and Hispanics and fewer Asians. Whites would be far less affected by the changes.

The bill in question, submitted by Del. Roslyn Tyler, D-Sussex, aimed to increase access for blacks and Hispanics by issuing guidance to “focus on the importance of increasing access to Governor’s Schools for historically underserved students” and including best practices on inclusion. Asian-Americans fighting the administration’s efforts to change the admittance standards at Thomas Jefferson have argued that the state would do better to achieve diversity by improving the quality of education to blacks and Hispanics in earlier grades so that they can be admitted to the elite schools on their merits.

“I understand as well as anybody that we need to get different populations into our governor’s schools, and I think there are ways to do it. I’m very concerned, though, the tone that has been set by this bill. I’m not blaming anybody in particular, it’s just become a lighting rod and it’s been serving to stigmatize a very hard-working community in Fairfax County which I am proud to represent and be married into. And that’s the Korean community, Indian community, Bengali community,” he said, adding that Thomas Jefferson had significant minority representation among its students.

Saslaw said he has heard from many constituents who were “overwhelmingly against” the legislation. “Many of these are parents — a large percentage — who came here as immigrants and have done anything they can to improve their situation,” he said. “They consider this bill highly offensive.”

Bacon’s bottom line: It is disturbing that so few African-American and Hispanic students are admitted into the governors schools. But changing admission standards to meet racial quotas has its perils. One of two things is likely to happen: Either less-gifted students are likely to struggle to meet the advanced academic standards… or schools will have to water down those standards. Neither outcome is desirable.

Virginians need to focus on the scandalous state of elementary- and middle-school education in Virginia that leaves such a high percentage of African-American and Hispanic students academically unprepared to compete for admittance into the elite schools. Educational malfeasance is especially pronounced in a handful of school districts, especially inner-city districts, which suggests that the problem is not systemic but is associated with the maladministration of those school districts. Watering down Standards of Learning (SOL) standards, as the Northam administration has done, only hides those failures to no one’s benefit — except those who are responsible for the failures.

Whether Saslaw, Petersen and the others recognize these other verities remains to be seen. Even if their skepticism of Northam administration policy is limited to the governors-schools issue, it takes courage to buck the race-doctrine orthodoxy that now predominates in the Democratic Party and most of the media today. Hopefully, these same leaders can steer the dialogue toward a more productive discussion about policies that lift all students, not some students at the expense of others.