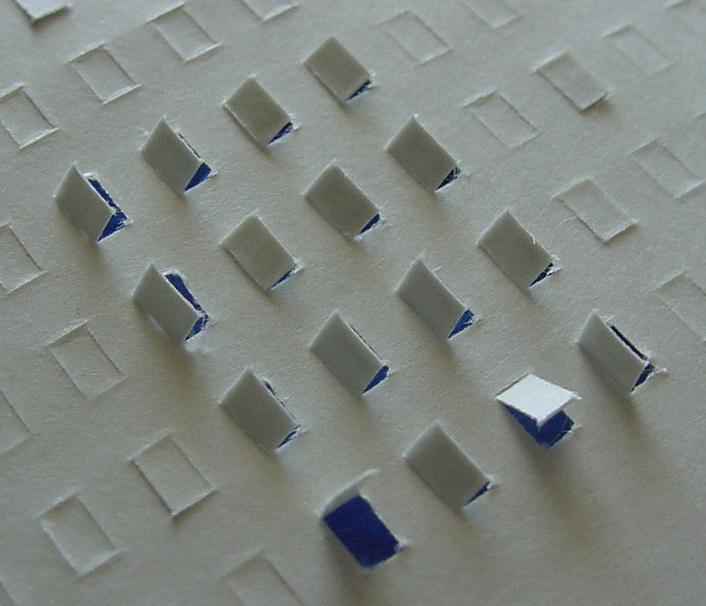 “Well, it’s happened,” said Bagheera the Panther in the Jungle Book. “Took longer than I thought, but it’s finally happened.”

That line could have been applied to the rush to computerized voting that followed the 2000 election fiasco in Florida. Soon after those events I wrote: “…when you abandon punched cards, you lose the artifacts which provide proof, enable recounting, and ultimately inspire public confidence that an election has been conducted correctly and without fraud.” Then I made this prediction:

“Electronic voting… will become the fox in the proverbial hen-house. Very soon, every election will produce another scandal involving electronic voting. Those new, improved virtual systems will… become so hopelessly hacked and vulnerable to compromise that punched card voting will actually return as an ‘anti voting-fraud innovation’.”

At the time, several states were already worried about touch-screen voting because officials finally realized that electronic voting provides no artifacts by which results can be verified and recounts can be conducted.

Diebold Election Systems, Inc. – later Premier Election Solutions – of North Carolina entered the electronic voting machine market in the wake of the 2000 Florida recount. The company supplied some 56,000 touch-screen devices to Maryland, Georgia and California for the Super Tuesday Primaries of 2004. Election Systems & Software of Omaha, Nebraska – a competitor – installed about 34,000 devices.

Diebold was attacked by Democrat pols because its CEO had political connections to President Bush and the Republican Party. Critics charged that the Diebold machines were suspect because technicians might program them to favor Republican candidates. 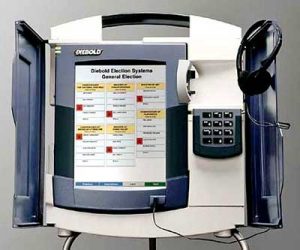 Quite apart from these ravings about politically connected companies – which would be laughed at, were the political connections reversed – California Secretary of State Kevin Shelley banned 14,000 touch-screen voting machines over security and reliability concerns. He also decertified 28,000 additional machines, pending an upgrade of their security.

These concerns were not without merit, as the technical complexity of electronic voting machines played a role in a special Florida election held in January 2004. Because voters used the machines incorrectly, 134 votes were not counted. Candidate Ellyn Bogdanoff won the election by only 12 votes. In Maryland, primary election vote-counts were delayed because of modem-malfunctions. Voting devices also malfunctioned in San Diego County, California, possibly disenfranchising hundreds of voters.

Diebold executives argued that the security concerns were unfounded, and blamed human and mechanical errors for the snafus. But election officials demanded modification of the touch-screen machines to produce a paper record of votes, to enable recounting. Industry representatives said adding that capability to current devices presented a major technical challenge that would take many months to accomplish.

But creating “backup” for touch-screen machines was not the real problem. The fact remained that this modification would not answer the need for ballot-artifacts. Artifacts must be “empirical,” not secondary. A card or paper ballot – punched or marked – is an empirical artifact because it was prepared by the voter’s own hand. It is – as I mentioned in an earlier article – a piece of “evidence.” Tabulations and recounts can be derived from it, but it alone is empirical.

Physical ballots can present difficulties, of course, as the 2000 Florida Presidential election demonstrated – especially if handled carelessly or with inadequate security. The pre-perforated card-ballot, was a particularly flawed device. Chads can easily be pushed out with a pencil or pen, and can be loosened by too much handling or riffling (as we saw re-counters doing on network television in 2000). This can render the ballot invalid in a recount.

In electronic voting, the ballot is virtual, not physical. A virtual artifact – a non-sequitur, as ever was – presents even more difficulties than a physical artifact because it cannot be seen, held, or effectively guarded. Backup printouts of touch-screen votes are not empirical artifacts, since they are derived from the empirical ballots.

Computer gurus might proclaim from the housetops that electronic votes are absolutely secure, but it’s a tough sell to the technically non-hip. ‘Did my vote really get recorded the way I cast it?’ is the question that lingers, no matter how fervent the security claims for electronic voting. As predicted, this problem has given us as much trouble as poorly designed, incorrectly used, witlessly handled punched-card ballots.

Thus, over a span of 18 years we have moved from the hanging chad fiasco of 2000, to a full-scale conversion to electronic voting, and now back to card- or paper-ballots. We have grasped the importance of physical empirical ballots. But, as the latest fiasco in Florida showed, paper is no guarantee against error, incompetence, and even outright fraud.

If we didn’t realize it before, we can see now that paper ballots bearing no identification of origin are as anonymous as cash. If you add a packet of cash to another pile of cash, there’s no way to identify which bank-notes were which, unless serial numbers were recorded along with notations of origin. Just so, if a box of ballots suddenly turns up in a car – as happened during the recent Florida election – or is found in a closet at a polling place, it’s impossible to tell where those ballots came from, or whether they were even legitimate. Once added to the big pile of ballots, their origin and legitimacy are completely lost.

All this shows us a possible path through the election-wilderness. Knowing how many people voted at every polling place is a fundamental first step to a trustworthy election. To ensure that we know that count accurately, every ballot cast should carry the identifier of the polling place where it originated as well as a unique identification number.

These simple measures will let a central machine- or hand-count determine how many ballots were cast in each polling place. That count would be matched against the tally made by those on-site officials who checked would-be voters’ eligibility and recorded their participation. If the polling place’s totals match the independent machine-count of actual ballots, then all is well. If not, a bi-partisan panel would investigate the discrepancy under protocols previously established by law. There are still ways to cheat, but it’s harder to do if the time-honored ploy of discovering boxes of ballots of unknown origin is prevented.

But the controversy over vote-counting is just a sideshow, contrasted with other efforts that both political parties are pursuing to add votes to their columns. Democrats – having noticed that Al Gore could easily have carried Florida in 2000, if convicted felons had voted – mounted a lawyer-blitz to restore the franchise for felons. They hoped to convince activist judges to rewrite or throw out state laws that prevented felons from voting. Although that initiative was unsuccessful, their efforts finally bore fruit when 60% of Florida voters approved a 2018 initiative that restored voting rights for most felons who have completed their sentences, including probation and restitution. Sexual offenders and murderers are excluded from having their right to vote restored.

Virginia’s Governor Terry McAuliffe issued an executive order in April 2016 which restored voting rights for 206,000 ex-offenders in the state. But in July 2016 the Virginia Supreme Court ruled that the governor lacked the authority to issue that blanket restoration of voting rights to the state’s felons. At this writing, however, it remains unclear how many felons were registered in the three months between the governor’s order and the Supreme Court’s rescission of that order. Investigations are ongoing.

The U. S. Supreme Court of the early 2000s also looked like a promising venue for enfranchisement of prisoners – including incarcerated cons, not just ex-cons. Some justices had indicated their intention to use foreign law as a basis for future rulings. This could have put convict-votes “in play,” and would have represented a radical change for the country. But President Trump’s placement of two conservative justices on the Court has probably scotched that possibility for the time being.

Illegal immigrants are also a target for both political parties. By failing to require proper verification of citizenship, California election officials have already allowed significant numbers of illegals to vote in previous elections. In New York, Democratic Party officials, labor unions and immigrant pressure groups have pressed to enfranchise a million-plus illegals – more than enough votes to swing any election.

Republicans have also done what they can to add new voters to their rolls. Various legislative initiatives have been aimed at helping some of the 8-14 million illegal immigrants currently in the USA to gain legal status. Citizenship and the vote would be logical next steps. But the bi-partisan political establishment’s efforts in this venue have provoked a serious backlash among the heartland’s electorate, starting with a furious telephone-blitz that jammed the Senate’s switchboard in June 2007 and shot down a “compromise” bill that would have enabled legalization and citizenship for some 10-12 million illegals. President Bush had supported the bill, but voters were having none of it.

Arguably, Mr. Trump’s promise to oppose legalization of illegal residents was a primary driver of his election. His efforts, as president, to control the flow of illegals across our borders have been vigorously opposed in local jurisdictions, the Congress and the federal courts. Some federal judges have ruled against Mr. Trump’s executive orders on immigration – not because he lacked Constitutional authority to issue the orders, but because they disliked their substance. Acting as “inspectors general” of the presidency has become a new activity for the federal judiciary. The current “caravan” of thousands of people storming our border is just the latest thorny illegal immigration issue Mr. Trump is dealing with.

Across our history, serious election irregularities have sometimes occurred. The widely acknowledged theft of Illinois’ electoral votes by Chicago Mayor Richard Daley in 1960 to elect John Kennedy1 was a notable example. For the most part, though, Americans have felt secure in the belief that their elections had reasonable integrity and that a settled body of law governed who could vote. Today, those two stabilizing pillars have been unsettled. Truly radical changes, like letting non-citizens vote, have alarmed the electorate and threatened the Republic’s future.

I urge all Americans, of any political persuasion, who care about their country to press their political representatives for a restoration of honesty to our electoral process – both in voting procedures and in stability of the voting population. We can no longer afford to sit around mumbling “that’s ridiculous,” while waiting for the other shoe to drop. The next “shoe” dropped by some activist judge might be a bomb that wrecks the place.