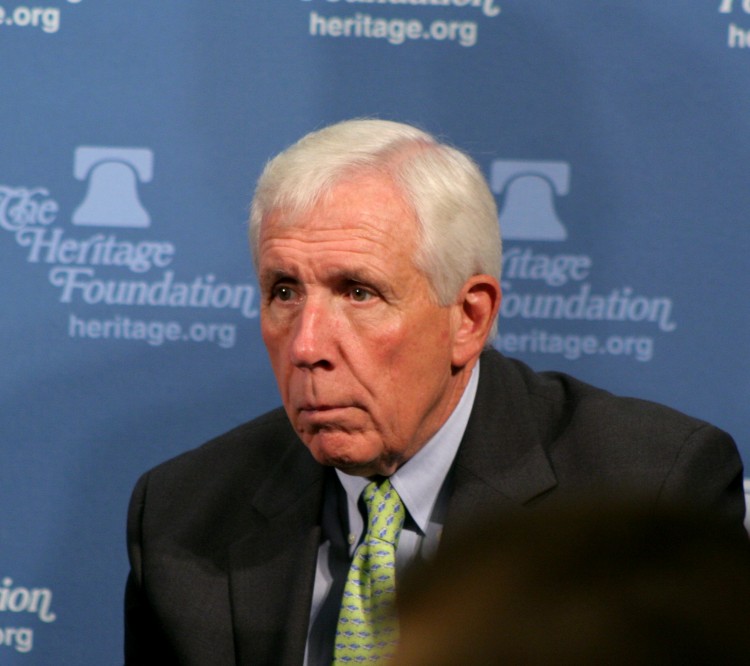 Former 10th district Congressman Frank Wolf has endorsed Donald Trump for President.  Wolf said it was the vice Presidential nominee who brought him to an endorsement of Trump. From the LoudounTimes.com,

“The fact that Mike Pence is on the ticket raises my comfort level,” Wolf, who spent 34 years in the House, said in a brief interview. “Mike Pence is one of the most honest, ethical, decent, moral men that I’ve ever served with.”

The current 10th District Congresswoman Barbara Comstock has not endorsed the Trump/Pence ticket.  When her spokeswoman was asked about it she responded,

“Nothing has changed,” the spokesperson, Susan Falconer, said in an Aug. 31 email. “Unlike our opponent who has made clear she would be a rubber stamp for Hillary and Nancy Pelosi, Barbara is her own woman and is focused on the priorities of the 10th District and has already delivered results on high tech jobs, tax relief, transportation, human trafficking, restoring national security and defense funding and battling the heroin epidemic.”

Not a good sign for republicans when the news is which leading republicans have and have not endorsed the presidential nominee.

It is a GREAT sign, the GOP rank, file, and grassroots get to learn which prominent Republicans think they are better than they.

LMAO! Comstock thinks she is going to restore national security and defense funding w/the Beast at the helm? She is either on drugs or has a wide open pocket book that someone else is filling w/dollars. What a farce these people are.

She did not endorse Hillary. She did refuse to submit to the mindless fallacy which would compel her to support a GOP nominee so obviously unfit for high office. Kudos to her.

By not endorsing Trump as the GOP candidate she is supporting the Beast. Period. At this stage people still playing that game are either getting pay offs, or they are just plain anti-American.

Babs was never was GOP, she USED and rode in the backs of “conservatives”, just the way Dems use Blacks. The Beast will NEVER support national security, we see how well she managed as Sec of State, and defense funding? The Beast hates the military, and will be flooding our borders w/millions so that America is no more. And Babs thinks she is going to be able to do anything for VA w/the Beast in Office? LMAO! AHAHAHAHAHAHAHAHA! NOVA and DC will be TOAST. ISIS is coming to get you.

Boy do I wish I could disagree.

I can see why we are always out maneuvered by the dems.

I can’t think of a single person who will say: ‘That Comstock woman is supporting Trump, well NOW I am voting for LuAnne!’

Seriously, someone inside the Comstock campaign has got to be actually strategizing; ‘By not supporting Trump, we solidify our 8 Bearing Drift votes.’

You have outdone yourself! That’s hilarious!

I think there may be only six Bearing Drift votes as one editor claims he left the Republican Party and another contributor has developed very libertarian like attitudes. What to do, what to do? For those of us west of the Blue Ridge Mountains in that forgotten portion of her district you might consider to do the rational thing and just write in state Senator Dick Black, she won’t mind, as she certainly doesn’t view us as a “strategic” voting resource worth bothering with anyway and that would be a serious trade-up for us all.

We will all end up voting for her if nothing other than keeping her a placeholder — as hard as it would be to pry the nomination away from her, it will be harder to dislodge the democrat if she loses.

Besides, who doesn’t want to see a Comstock/Delgaudio Battle Royale???

Of course that presumes she won’t be in a Senate Shaktacular!!

Understand your position, not so convinced as you though, her Fairfax and a large part of the Loudoun base without a doubt and that will likely reelect her but with a lower percentage vote then 2014 and with little to no real enthusiasm for her candidacy. She has pissed off far to many, often needlessly and her inability to just produce a meaningless Trump statement of support has not gone unnoticed and will not bode well for her in a future Trump administration which is looking like a far better possibility.

She is a poor retail politician in my option and has ‭isolated herself politically in a shifting state political scene. Any shakeup in the federal government union base and she could be in trouble in a flash and if Trump ends up sitting in the WH I wouldn’t be surprised to see some such actions occur particularly if these Democratic packed employment agencies masquerading as executive bureaucracies openly attempt to stymie his political agenda. I believe she thinks she is in a sinecure but the 10th District is far from that with a pitifully weak party organization to backstop any shifting events.

Man, that is totally spot on!

I think Trump perceives more value in her re-election than she merits.

While she certainly doesn’t deserve the re-election, and is doing everything possible to snatch defeat from the jaws of victory (An iCarly Fundraiser, in Frederick??)

It would not surprise me that the endorsement dance ‘no, get that filthy Trump donation away from me’ and the ‘optics’ (Rubio bumper sticker on car) is just kabuki theatre leading up to the Teletubby ‘Big Hug’ in late October.

I understand that the only way she’s getting any traction in the 10th is where the party grafts her onto Trump.

She has such potential to unleash her inner Schlafly and lead the 10th to the right!

I think Trump votes will be much more valuable to Barbara than kudos.

I think Trump votes will be much more valuable to Barbara the closer we get to November.

It is true, get on board or get left behind. Those that can’t change their attitude will regret it later. Trump has a good memory, so do we.