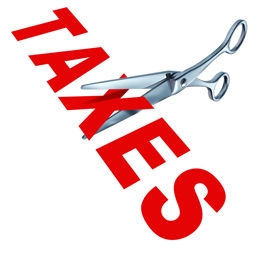 Four former Republican candidates for Lieutenant Governor teamed up to write a piece for The Hill, published earlier this afternoon. It deals with an issue central to the continued (or, renewed) prosperity of our country: reform of the federal tax code.

Keeping taxes low, or even cutting taxes, seems like a fairly easy thing to do. But it’s not. It requires tough choices, and steady, principled leaders who aren’t going to back away from the important task of keeping government under control while not impeding the vibrancy of the private sector. It can be done. In my home county of Stafford, our Republican leaders managed to cut taxes 9 times in recent years, on ordinary citizens and on businesses. And it works…Stafford is thriving, providing an object lesson on how conservative governance works.

It’s a lesson folks in Washington (and in localities across the Commonwealth) need to learn.

The article is reprint in full below. Find the original here.

Since most Americans paid our tax bills this past month, it’s a good time to contemplate what we come up against every April—and question why Congress has done so little to fix what is obviously a broken tax code.

It’s time for the federal government to end its years of partisan distraction and get to work rationalizing the tax code.

Taxes are too high and too complicated. Because they are so complicated, the cost of preparation is an additional burden which in effect makes our tax bill even larger. Every business in the Commonwealth and across the country must budget for the administrative costs associated with figuring and filing their overly-complicated taxes. This is a very heavy burden, especially for the Main Street businesses that drive the economy.

The result is that companies have fewer resources to expand, hire new workers, increase wages or start new projects. In short, high taxes hold back businesses from doing exactly what the economy needs to break out of the economic doldrums and return to robust growth.

High business taxes also mean American businesses are hobbled in the global marketplace. Inflated taxes mean inflated prices for goods and services—which mean U.S. companies are less able to compete with foreign rivals who often have lower taxes and lower labor and manufacturing costs. We all lose when productivity and job creation – instead of actual product and consumption – are taxed.

It’s a double hit to businesses and the economy. Companies have less to spend on jobs, expansion, and growth because their taxes are too high—which also makes it harder to compete abroad, further diminishing profit available for new investment. Congress needs to take action this year to simplify the tax, ease the administrative burden on business, and make American tax rates competitive so that our companies no longer have to compete in the global economy with a proverbial hand tied behind their backs.

What does all this look like in the real world? Here in Virginia, even though we weathered the recession better than many states, poverty rates have increased steadily for six straight years, and more than one in ten Virginians lives below the federal poverty level. Indeed the picture is darker in Virginia than these numbers suggest. Federal spending in Northern Virginia makes the employment and poverty rates look better than the reality for other parts of the state.

The Eastern and West Central regions of Virginia have a poverty rate of 16 percent. In Southside and Southwest Virginia one in five people live in poverty.

The poor and unemployed need help, but they do not need to be made dependents of government. They need a bustling economy in which jobs and wealth are being created not stifled. Government needs to make it easier for businesses on Main Street to grow and thrive and create the jobs desperately needed by those who can’t find the employment necessary to meet their financial obligations.

But growth cannot happen without substantive tax reform that fixes the budget, restores fiscal sanity and stops punishing job creation and productivity. It is up to Congress to create a pro-business environment because this administration is never going to do it.

Congress must reduce and simplify taxes and give U.S. companies the certainty they need to grow the economy.

With tax reform, America could return to broad prosperity. Without tax reform, the people of Virginia and the rest of the country will continue to suffer.

I quit reading when I saw “E.W. Jackson”.

This is all good, but didn’t we just report that Corey Stewart RAISED taxed in Prince William County? http://thebullelephant.com/past-lt-gov-gop-candidate-corey-stewart-raises-taxes/ Just sayin’.