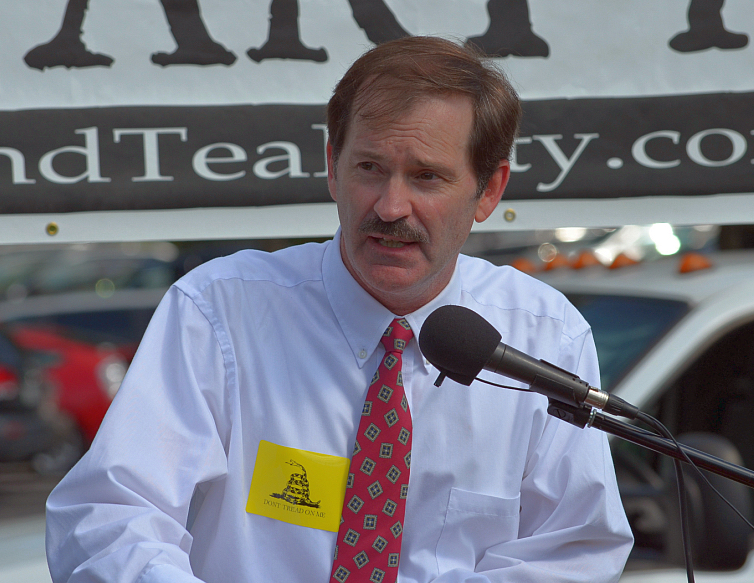 Larry Nordvig has never been shy with his opinions to the media. He has been on Greta Van Susteren’s show multiple times and once led a high-profile Eric Cantor protest rally as a Richmond Tea Party leader, railing against Cantor for his record and for being out-of-touch with voters. So his recent actions seem straight out of an episode of the Twilight Zone.

In February a special election was held in Powhatan County for the supervisor position in Nordvig’s district. Larry Nordvig was serving as Vice Chairman of the Powhatan GOP and was poised to run for this quick special election. He won with the help of the Powhatan GOP, tea party activists, and the two GOP supervisors currently sitting on the Board, who were all too eager to get another conservative vote on the Board so they could start reducing spending and cutting taxes.

Everyone was committed to helping Larry Nordvig win because Powhatan government needs a serious overhaul. Rural Powhatan has a little over 28,000 residents, but they have the third highest real estate tax rate in the Greater Richmond area at 90 cents. Additionally, they increased spending 5% last year (far above inflation plus population growth) and just increased it another 5% this year – which Larry voted in favor of this month. They are now spending over $203,524 per day for the next year to support this spending habit. They are also sitting on over $120 million in debt.

NORDVIG VOTES AGAINST TAX RATE REDUCTIONS and FOR SPENDING INCREASES

Larry’s background with the tea party movement and the Powhatan GOP left little doubt with anyone that he would carry through with his campaign promise to reduce spending and taxes. I’ve known Larry for years and I’ve always supported him, so I was shocked when I started receiving phone calls and emails from his supporters who were apoplectic that he had done the exact opposite. I immediately picked up the phone and called Larry’s cell phone myself. I left him a message that I had heard some news that was disturbing, knew it could not be true, understand there are always two sides to every story, and to give me a call so I could straighten out the confusion. And then I waited. And waited.

I saw him posting on Facebook throughout the day, but he never called back. I asked him on Facebook to give me a call. Still nothing. He started posting that his “opponents” were coming after him because he had voted for the spending increases and voted against the tax rate reduction. Keep in mind that his “opponents” were his own Republican colleagues and activists that had just spent months helping him comb through the budget for savings at his request. In a strange turn of events, he claimed the reason he voted against the tax rate reduction was because of a lack of transparency. He claims that his fellow Republican supervisors were sneaky and blindsided him with this tax rate reduction budget amendment, so he couldn’t support it. There are a couple of issues with this claim:

In what can only be described as bizarre, Larry Nordvig attended the Powhatan School Board meeting a few days after his spending increase vote and gave a speech to the teachers saying that in the same way JFK stood at the Brandenburg Gate and stated,  “Ich bin ein Berliner” that Nordvig was standing before them now to be the champion for teachers and bigger school budgets saying, “I am a Powhatan Teacher!”

Nordvig later spoke during a County Board of Supervisor meeting and made a political speech from behind the dais renouncing his membership in the Republican Party and withdrawing his name for consideration to be on the 2015 general election ballot for supervisor as a Republican. He then proceeded to vote against, for the second time, a one cent real estate tax rate reduction for Powhatan County residents.

Nordvig has undergone a radical political transformation since his February election. He abandoned his pledge to lower taxes, repeatedly attacked his Republican colleagues on the Board who worked to get him elected, abandoned the Republican Party and the Tea Party, and heaped effusive praise on the County Administrator and the School Board Chairman after they presented the Board with a proposal to raise the tax rate by 11 cents. Who could ever trust him again?