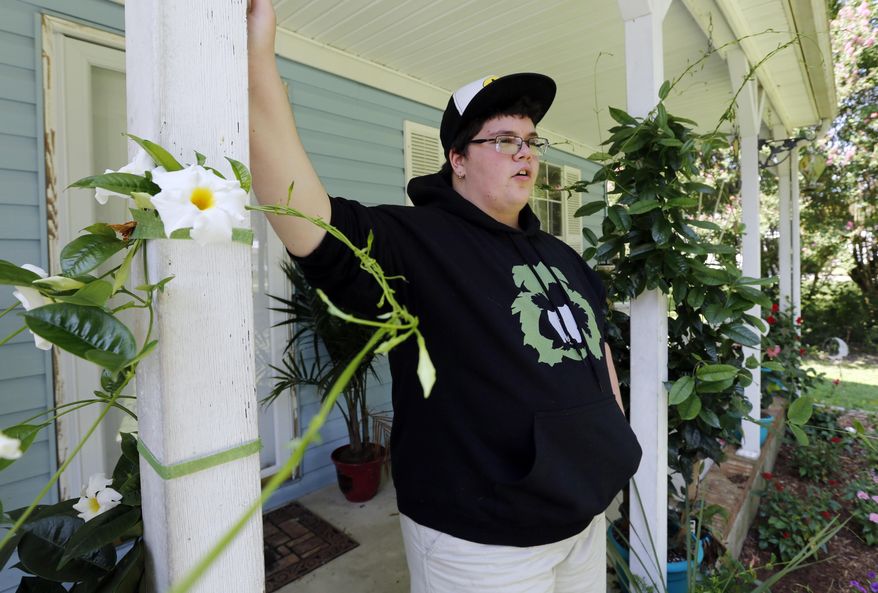 Gloucester County Schools ruled that students must use the restroom of their gender at birth, or use a private unisex facility.  Student Gavin Grimes sued on the basis of discrimination and a federal judge rejected his claim.  Now a three judge panel on the Fourth Circuit has overturned Gloucester county’s rule declaring the school policy to be discriminatory under Title IX which forbids gender discrimination in schools and colleges.

Gavin decided at age 6 that he would dress as a boy and identify as a boy even though he is biologically female.  In 2014 he told his parents that he was transgendered.  A psychologist diagnosed him as having gender dysphoria which means the boy is confused about what his gender is.  His parents agreed to let him dress as girl, they also let him change his name and take hormones to make himself more masculine.

This ruling by the Fourth Circuit has far reaching effects.  It covers all 5 states under the 4th Circuit, including North Carolina where they have recently passed a law which requires people to use the bathroom of the gender they were assigned at birth.  The other states covered by this ruling in addition to Virginia and North Carolina are Maryland, West Virginia and South Carolina.

I don’t care about this at all.

Being a member of the TEA party, I care about taxes.

That’s what the T stands for, it’s not for “Transgendered Equality Altercation”

I couldn’t care less what bathroom people use as long as they don’t urinate on the seat.

Then don’t complain when some pervert guy uses the locker room when your daughter is in it. And, ladies, get ready for similar policies at your local gym. Enjoy the gross.

These parents enabling “transgender” kids should be in jail. The kids themselves have a mental disorder and should be getting help. The enablers who push this crap should be ashamed of themselves and realize they are encouraging children to mutilate themselves.

This is how crazy it can get, lesbians forcing their son to be a girl! http://www.jewsnews.co.il/2015/05/28/lesbian-couple-gives-son-hormone-blockers-says-the-child-is-transgender/ These women should prosecuted for child abuse.

That story was and is crazy… crazier still is that child was foster child and non-verbal (autistic) when he, at the age of three or four, somehow communicated his deep and abiding belief he was a girl to these two women. Social services abused that child just as much as his eventual adoptive parents.

He looks just soooo happy that his “gender choice” was recognized, doesn’t he?

Only in California would the state allow this to happen to one of their foster children. It’s terrible. It’s abuse.

Can we kick him, er, her, out of the state? Let it go live with the Obama’s.

So what if a kid identifies as a cat and demands a litter box? Does the Obama administration-controlled court say that we have to indulge his craziness and install the receptacle in a public restroom?

What’s the big deal? When kids go rough camping they don’t have stalls or labels. I bet most don’t even try to hide behind a tree. Not to mention they see more than most adults do by just attending health class, surfing the internet, or traveling between NC rest areas on I-95. Don’t be a prude, it’s all part of the new education.

which part is perversion – feeling the need to decide for yourself about personal matters? Transgendered people wanting to be treated fairly? Or is the bathroom issue your true concern. I could not imagine that you are saying that being transgendered is perversion. What exactly is your beef (pun intended)

No.. thinking you are someone you demonstrably are not is mental illness.

Pretending you are something you are not when you are a child is normal… parents freezing their child in a fantasy phase just so they can feel special for having a “transgendered child” is child abuse to the point where the biblical remedy of millstones and the ocean comes to mind..

The law trying to force everyone to pretend that the mentally ill are not mentally ill… that instead they have a choice over what gender they are… is perverse in the extreme and is contrary to reality..

As a child I used to pretend I was all sorts of things to the point of almost believing them myself – yes, its part of childhood. What if a kid wants to pretend he’s a green flying terradactyle?

My older son wore cowboy boots and would only answer to “Tex” for a solid six months when he was four… I didn’t start telling people he was actually from Houston.

Mentally ill? What century do think this is? Come out of the hate closet and accept that people are different than you

Mentally ill. whether John Q Crazy thinks he is Mary Queen of Scots or simply Mary, he is still biologically male with an X and a Y sex chromosome. Reality is not hate.

What is hateful and ultimately damaging to the mentally ill is encouraging their delusion even including encouraging them to mutilate themselves to further that delusion. There is a reason that Johns Hopkins no longer does gender reassignment surgery. That reason is the astronomical long term suicide rates amongst that post surgical population because, in the end, surgery did nothing to help their underlying mental illness.

are you including gays, bi, etc in your mentally ill category or only transgendered?

Why are you changing the subject?

not changing the subject at all, simply trying to see if your perversion comment is because of a need to assert a religious belief against all LGBT or are you truly only worried at the T community? Seeing your comment here makes one think that it is the former, not the latter

I suspect that you are objecting to these folks on the basis of your personal morals, not for some desire to understand and to help others. You use of the word “perversion” when you talk about what you label as a mental illness is disturbing. One must assume that you feel this wall about all gays, not only the transgender community. And, I do know that you are wrong. Even if one accepts a “mental illness position”, labeling those affected at perverse is terrible.

Suspect what you like… homosexuality and body dismorphism are two separate issues. A very clearly said that the court’s decision was a perversion. I will also say perverts are taking the guise of trangender to peep at and/or molest women.

Individuals who actually have body dismorphism, on the other hand, are mentally ill and in need of treatment. It is disgusting how homosexual activists are using these people.

OK, you perversion comment only applied to the court decision, not to the actual transgendered people. You were not very clear in your first comment and your subsequent comments did not point to that specific concern – I apologize for not trusting you.
But what is perverse about a court following the rule of law?

I think I was pretty clear but I don’t mind reiterating.

The court is not following the law… in no way was the law they used intended to cover allowing men to use women’s bathrooms or women to use men’s bathrooms. It was intended to provide equal access of women to sports and other educational opportunities. The original meaning and intent of the law actually cannot be followed without a brightline demarcation between the sexes which this ruling perverts.

Are you a constitutional lawyer? Or is your opinion based on watching FOX?

It is one thing for the parents and the school to allow the kid to play out the role he/she wants. As we discussed, kids go through all kinds of phases. But it is another thing for his parents to allow their kid to be used as a pawn as a plaintiff in a lawsuit to force everybody else to accommodate.

Well, body dysmorphia is a an illness that can be treated. The fact that the parents didn’t get her help and went along with pretending she’s a boy, is disgusting. Shame on them for not helping their daughter!

There is no such thing as “Transgendered” – you are either male or female by biology at birth. When John Wayne Bobbit’s angry wife cut off his — did it necessarily make him not male?

can there be any doubt why the GOP is going down hill so fast with uneducated posting like this on sites like this?

Perhaps you would do well to educate yourself on stages children go through and the need parents to guide them when are confused. Sometimes they also need mental health treatment when they are confused about their gender. It’s very sad when they don’t get that help. This boy/girl will suffer the rest of his life as a transgendered person. It could have been avoided if he had gotten help.

Are they asking for reconsideration by the full panel?