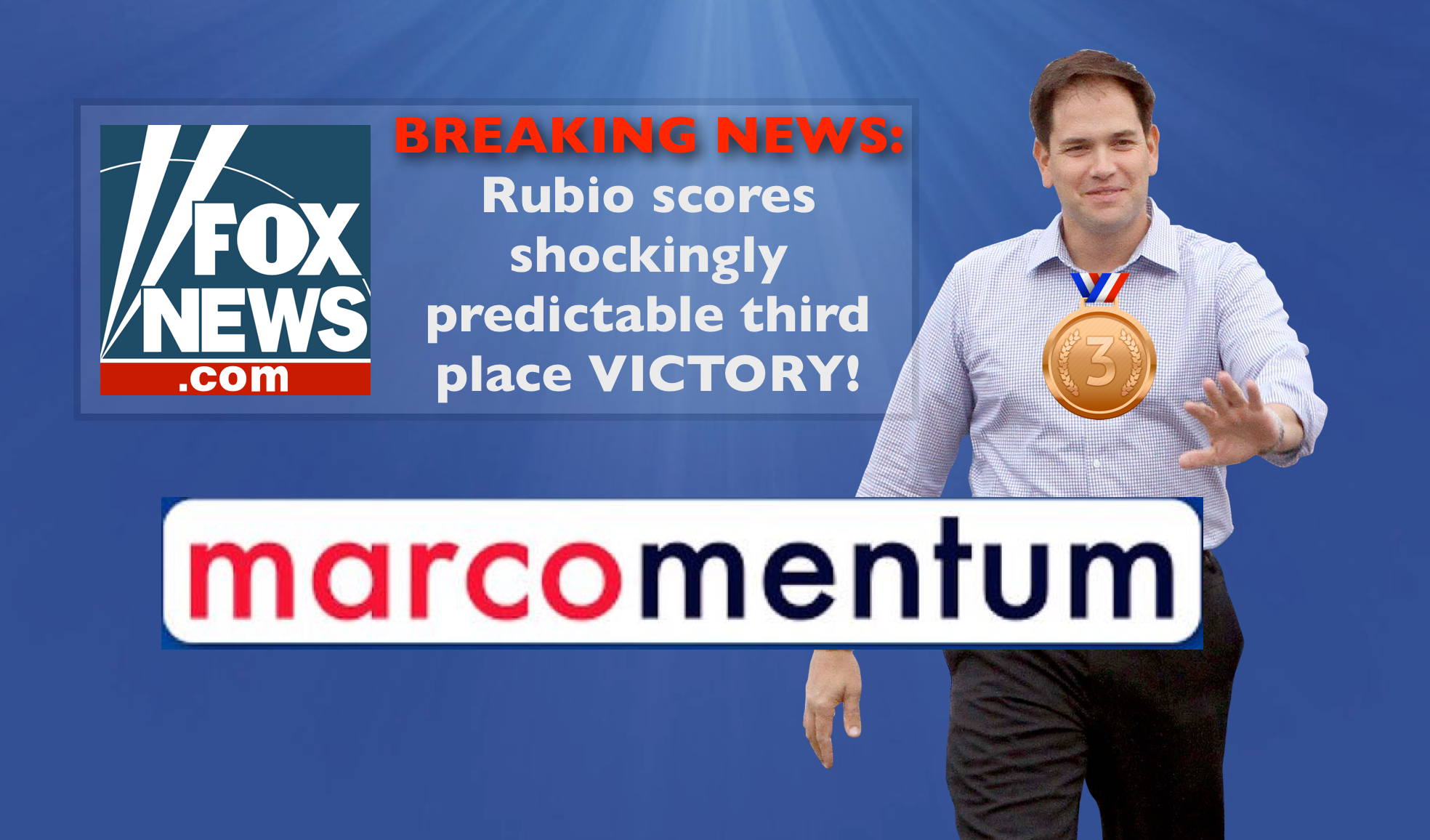 It’s been confirmed by Iowa election officials that Marco Rubio has indeed come in third in the IA caucuses. After weeks of a massive, unprecedented surge, he has gone all the way from 3rd in the polls to 3rd in votes!

While everyone counted him out (except for everyone), he has shattered the previous record for total amount of votes for a 3rd place finisher.

A spokesman for the Rubio camp told Fox News that they are thrilled with their predicted 3rd place finish, and that finishing third (behind Donald Trump and some other dude) puts them in the driver’s seat going forward, and that Fox News’ Bill Sammons is measuring White House windows for drapes as soon as tomorrow.

This historic 3rd place finish clearly indicates that Rubio is the only person who can win against Hillary and coalesce Republicans behind his candidacy a’ la McCain and Romney. Unlikely remaining obstacles could include placing better than third in any poll of any state, and leading Donald Trump and some other dude in any poll in any other state.

Fox News reports that, upon hearing the news of Rubio’s historic 3rd place victory, Brit Hume tripped over his soon-to-be-emptied champagne bottle and fell even more deeply…..in love with Rubio.

Finally, Fox News reports that they can gleefully confirm that Marco Rubio has indeed exceeded all credulous expectations of a third place finish and has over performed in a historic and stunning 3rd place finish!

Finishing ahead of Marco Rubio were……….FLASH*** MARCO RUBIO FINISHES 3rd!!!! Victory speech to be the stuff GOPe dreams are made of!

In other news, Fox News reports the campaign of Donald Trump (remember him?) is finished after he placed a distant second to Rubio’s 3rd place victory!

(UPDATED) 11:15 PM 1/2/16:
Some dude took WAAAAAYYYY too long in his concession speech after a gravely disappointing, mortally wounding and very distant 1st place disaster, badly underperforming all expectation of a second place finish, garnering a disappointing historic record for most votes ever received in a GOP Iowa caucus. Postmortem on the Other Dude candidacy on The Five tomorrow and continued throughout the evening at our sister Rubio Way Media partner, the Washington Examiner.

(Tune into Fox News for continuing coverage of Marco Rubio’s stunning 3rd place historic victory and other news. If there is any).

In other news, from the Washington Post, we learn that “Marcomentum” is indeed real.  In Virginia, that means that former Republican Jim Rich (R-Fauquier Machine) and Davis Rennolds (R-McGuireWoods), among others, have climbed on board with the most exciting middle tier *winner* in Iowa caucus history. Mike Thomas will announce his endorsement at a later date, and will be joined by Boyd Marcus, Bill Bolling, and Lord Voldemort.

Has anyone read Donald Trump’s 2,000 book where he says America needs universal healthcare, common core and agrees 2nd amendment rights, assault weapons should be outlawed? The book is titled, 2000 – The America We Deserve.

I read this and they do not disclose the info either. They don’t disclose the talk host are not real journalist and can get by with lying and spinning it until calls them on ethics. Bill and Greta both disclosed it when called out. Another reason not to trust FNC:

Prepare to be disgusted even more by establishment Prince Rubio??

“Impartial” Frank Luntz had to have an honest and legitimate focus group in the first debates… before he could start promoting his buddy, Marco Rubio…

“The GOP focus-group leader made big bucks building the candidate’s (Rubio’s) image in Florida a decade ago”.

Luntz was paid 1/3 $ Million by Rubio-run legislature in Florida, and there’s more:

This is great! I needed this laugh!

But I’m sickened because TASS, oops I mean Fox News, is having an effect with its despicable propaganda.

I don’t think that’s true. I know a TON of people who have had to stop watching Fox, because they were sick of having Rubio shoved down their throats. They’re still cheering for Cruz, despite all the Rubio propaganda.

And Jeb Bush before him and Kasich.

Just a heads up to the TBE staff, when you start attacking people for no good reason, it’s petty and pathetic. If you ever took the time to meet Kate and Davis Rennolds, they are great people and even better Republicans. I’m proud to call them friends, always will be for that matter.

As for Marcomentum , its real. If you want to deny it, thats fine. Yall are wrong on everything else, so it’s par for the course from TBE.

You up voted yourself to get the ball rolling? Yes the Establishment and its donors will do everything possible to push Mr Amnesty’s “momentum.”

Lighten up, Matt. I disagree with the message (that Marco doesn’t get a boost from his Iowa performance…he does), but it’s light hearted parody. No one is saying anything bad about Davis or Kate…they’re good people. Good parody often also pokes fun at itself, which is how I read that last line, and how it applies to the whole thing.

As far as us being wrong on EVERYTHING, I got three letters for you: LOL!

Every host on Fox has declared Rube the real winner. I think of him as the guy who lost to the joke that lost to Cruz.

They follow Murdocks orders down to the i’s dotted, t’s crossed and the periods.

Bronze is the new Gold!

This is the mentality of the country today….Everyone gets a trophy!!!!!! SO Wrong

He’s got some momentum…let’s be fair. But, that’s funny stuff!!

Rubio clearly exceeded expectations in Iowa, and does in fact have momentum. He was predicted to finish a very DISTANT third, and shocked everyone with a virtual tie for second. He did not enjoy the name recognition of the over-exposed Trump and infamous Cruz, but as he gained exposure, voters became interested. Why denigrate that?

Rubio is trying to play the expectations game and it is going to backfire on him big time. All the other mainstream candidates are now gunning for him to try and block this so-called momentum that doesn’t exist. It is going to hurt him in the end.

Des Moines Register last Saturday: Trump 28%, Cruz 23%, Rubio 15%. Rubio’s 23% represented a 53% increase. That qualifies as dramatic in my book. And that is why ALL of the new outlets called it dramatic.
http://www.desmoinesregister.com/story/news/elections/presidential/caucus/2016/01/30/donald-trump-reclaims-lead-latest-iowa-poll/79562322/

I’m not. I’m looking at the four polls mentioned here in this thread and they all picked him to finish third. In three of those polls his result was basically within the margin of error, and there was one outlier.

You mean the media consensus? Always.

I don’t hate Rubio. I don’t blame him for taking lemons and trying to make lemonade, but it doesn’t mean I have to drink it. Like I said before, Rubio is trying to play the expectations game, and I think in the long run it is going to hurt him.

Yes I will do so– that slimy Gang of 8 Used Cars Salesman can go to perdition.

Rubio spent a ton of money in Iowa, more than Cruz and Trump together, had he still finished third. Momentum? Sure, but it doesn’t make up for the fact that Cruz is running a better campaign.

Classic. You would think after watching media reports that finishing third, when you are predicted to finish third, was some big accomplishment. Marco is trying to create momentum out of thin air, but he should be careful what he wishes for. He wanted the attention, and now he’s got it. The long knives have been sharpened, and he is in for a brutal week in NH.