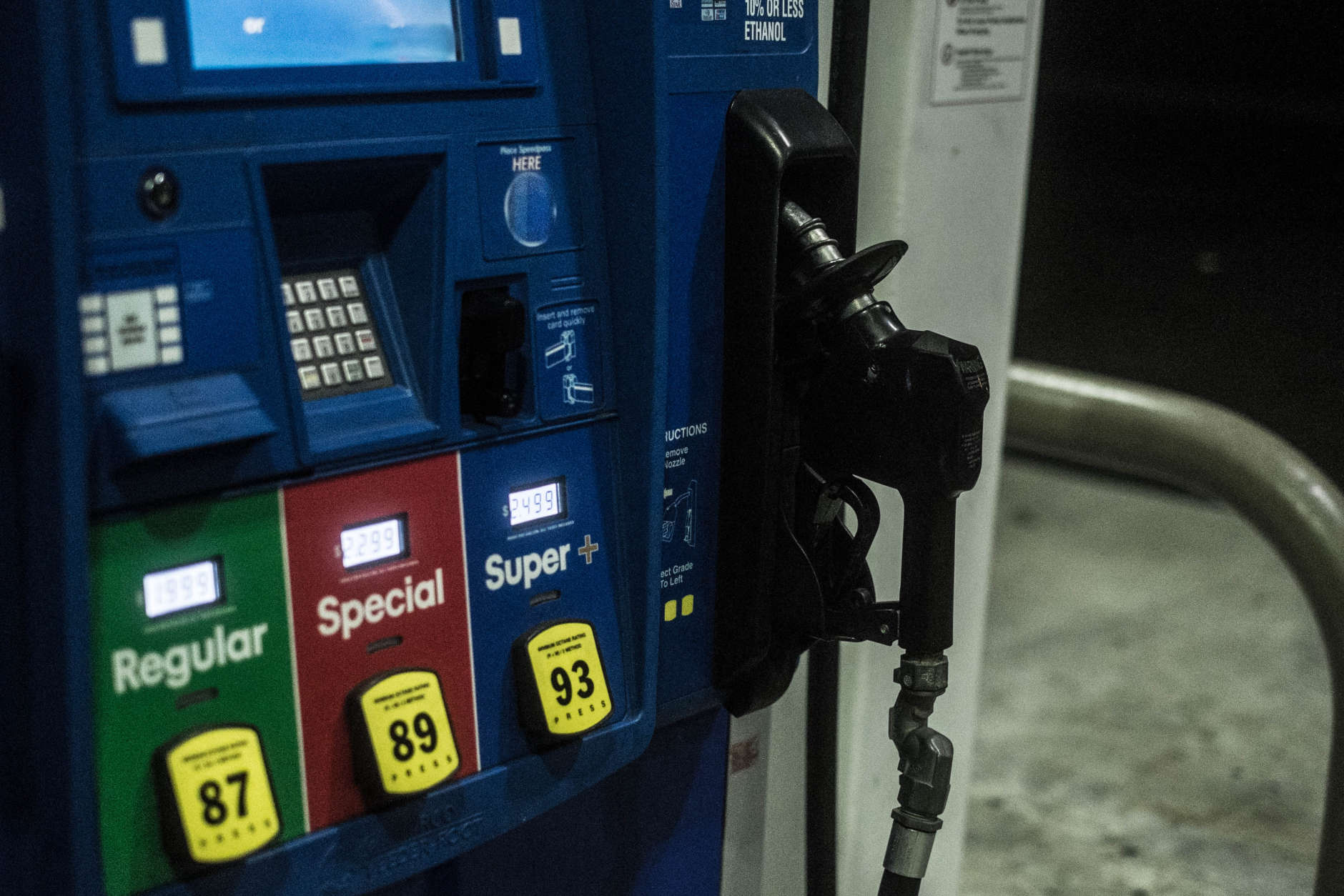 Frank Wagner does it again

For the second year in a row Senator (and candidate for Governor) Frank Wagner (R-Virginia Beach) is trying to raise gas taxes in Northern Virginia and Hampton Roads.  It’s a strange thing for Wagner to do when he represents parts of Virginia Beach and parts of Norfolk, both squarely in the higher regional gas tax zone. And he’s running for the Republican nomination for Governor. Raising taxes never endears Republicans to a candidate.

Senator Wagner’s bill, SB 1456, places a floor on the 2.1% regional gas tax in Northern Virginia and Hampton Roads. There is no ceiling on the tax. As gas prices have gone down so have the revenues on the gas taxes. (Of course the state government couldn’t possibly get by with less taxes.) These regional transportation taxes are supposed to be used for transportation projects in the region where they are collected. Here in Loudoun the funds go to metro buses until the second phase of the Silver Line comes to Loudoun.  (Our extra gas taxes in Northern Virginia do nothing to help those of us who drive cars.)

According to this document revenues have fallen 40% due to lower gas prices.  The document also explains the rationale for this floor on the regional gas tax. According to some delegates Frank Wagner’s bill could double gas taxes in the Northern Virginia and Hampton Roads areas. An explanation for why they need this floor:

In 2013, legislation was passed that put a minimum threshold of revenues from the state gas tax – to a level no less than the revenue that was available at the time of the law’s passage – effectively protecting the amount of revenue available at the state level. In the last year and a half alone, due to low gas prices and absence of a floor, NVTC experienced a loss of $23.1 million.

Earlier in January Northern Virginia Democrats said they would try to push through a bill that would put a new floor on the regional gas taxes. (The key word being Democrats.)  Senator Wagner’s bill had passed the Senate in 2016 but it was defeated in the House of Delegates.  Democrats wanted to try again.  From WTOP.com:

Del. Vivian Watts, D-Dist. 55, a former state transportation secretary, said the push for a floor on the regional part of the gas tax, to ensure a minimum level of funding, will come up again in the General Assembly session that begins next week.

Last year Wagner’s gas tax bill was defeated in the House of Delegates. We need to make that happen again. Let your delegate know that we do not support an increase in regional gas taxes.

Frank Wagner does it again was last modified: February 6th, 2017 by Jeanine Martin

[…] proposing a gas tax increase for the second year in a row, which thankfully failed to get traction in the legislature, the […]

[…] We previously wrote about Senator Wagner’s transportation tax bill, SB 1456, which would increase gas taxes in Northern Virginia and Tidewater.  We are happy to report that although the bill passed in the Senate, 26 to 12 it has been tabled on a voice vote in the House finance committee.  For the second year in a row, Wagner fails to raise our gas taxes! […]

[…] to pay Wall Street – for the interest on the bonds.” Then just days ago Frank offered a bill to increase gas taxes again; essentially it’s a tax increase but I’m sure using Wagner Common Core math more = less and the […]

Jeanine, I’m appalled, aghast, dismayed, thunderstruck, shocked, that The Bull Elephant posted an article pointing out flaws and fishy decisions in a political candidate! How terrible! Why, TBE is fast becoming a hit blog focused on Wagner. My evidence of this? This article pointing out something fishy about him! It’s almost Democrat, nay, Obama, no, Stalin, no, it is HITLEResque the way you’ve dared to say something about this one candidate and his positions!

Did I nail the hysteria? Or was I not dramatic enough?

[…] including gas taxes in three states, New York, West Virginia, and Iowa. As I reported on Monday, in Virginia the General Assembly is trying to RAISE gas taxes. Even New Jersey and California are lowering their sales tax and four states plus Washington DC are […]

When I lived in VA Beach from 1993 to 1998, Frank Wagner was my representative, and I liked him. He was always honest and upfront with his constituents. I think he is right. The gas tax should go up, because I prefer a gas tax to an income tax hike. Let the people who drive pay for the roads they use. It is that simple. And as long as the population keeps on growing and growing due to immigration and more immigration and more immigration (something which many of you conservatives don’t seem to mind) then we will have to continue to upgrade our infrastructure.

The problem is that this tax is exactly the opposite- it’s forcing people who drive (buying gas) to subsidize the already-heavily-subsidized Metro riders even more. If Metro needs more money, that should come from station-area tax districts, so the people who benefit from it pay for it.

WE folks in rural Virginia are sympathetic to the real or perceived needs of Tidewater Virginia, Fairfax/Other Northern Virginia, etc for more bridges, tunnels, roads, rail commuting, etc. We truly are. We visit there sometimes. BUT we are NOT AT ALL interested in paying more in gasoline taxes for their needs and suggest that they have tolls roads/bridges/tunnels.

Furthermore, WE folks in rural western Virginia – not all of us but many of us – are sympathetic to Tidewater industries’ interest in big pipelines bringing UN-natural gas to them. We truly do understand. BUT we are NOT AT ALL interested in tearing up our landscapes, mountains and valleys, rivers and streams, and countless family farms, etc with BIG UN-NATURAL pipelines!

We in rural Virginia are natively conservative: e.g. don’t tear up that land unless you need to! don’t cut down that tree unless its in the way and you can’t get around it no way at all! So why are the so-called ‘conservatives’ aka ‘Republicans’ so energized to tear up our stuff AGAINST OUR CONSENT and CONTRARY to private property rights?

Sen. Wagner came to the LCRC meeting on Monday. He stated on multiple points that he supported the Transportation Tax (apparently not realizing that the room helped Dave LaRock primary and defeat Del. May who sponsored it). I picked up one of his fliers and it states in a few places he fully supports Metro (whatever that means). While I personally like his style (direct and a bit gruff), his policy positions have made him a “no” on my list. Gillespie or Riggleman are the two left to ponder.

He certainly didn’t know his audience!

Virginia has some treasure in her beauty, from the Chesapeake, Shenandoah, to Appalachia.
I am very conservative in keeping them so others may enjoy.

I live in McLean VA in a cul de sac that belongs to the State Of Virginia. In 23 years our road has never been paved by the state. Of course the state said they had no money. I did ask what the excuses have been for the past 23 years but have not received a reply. My state delegate is Rip Sullivan (D). So if anyone know how to get a road repaved before we fall into a giant sink hole let me know. And have you seen the roads in Northern Virginia? They ain’t good.

Shut down the Goddard Institute for Space Studies and fire Gavin A. Schmidt.. That will save billions of dollars. Use some of that money to fix your cul de sac.

Your local county supervisor can complain enough and get it moved to the top of the list. I would start there. It makes them feel good to accomplish something usually.

We have great roads in Loudoun. Even the numerous gravel roads in western Loudoun are regraded often. Our paved roads seem to be repaved every year. Whenever I drive in Fairfax I am shocked at how bad the roads are. They’re terrible, full of potholes.

Keep bothering your delegate and your county supervisor. I have called on politicians once for road problems and the problem was solved within a day or two. Good luck to you!

Virginia’s middle-class would be so much better off if the power company puppets only met every 2 years. One could legitimately question if these non-budget year sessions are necessary so that these puppets can kiss lobbyists asses, and pick up a check from those ass kissed lobbyists? All legal of course.

I’ll be looking for that.

You got it! Perhaps another post is not necessary.

Jeanine. Thanks for posting this article. Is anyone in the state taking Wagner seriously given that he’s such a tax and spend liberal?

I look at various committee membership and have come to the conclusion that this is not all because of Democrats being that they are not evenly split R&D.
Take out abortion and guns , there is no difference.
Maybe the pic posted should be a cartoon character of a fat cat businessman.
How much has Wagner taken from Home Builders associations, a whole lot of contributors on his page.To bad he appears not to be constituent driven.

You are always busting me up.
I fear the swamp is extended it’s shoreline to Richmond, and when we drain it we can’t drown them in the Chesapeake for their toxins are far worse than kepone.

Not saying I would drown a
cat, there helpless not the self helped.