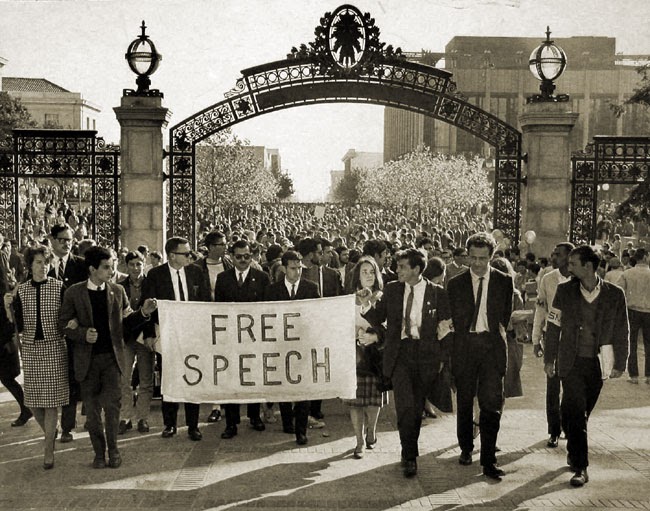 Many years ago when I was getting my certification for open water scuba diving, my instructor hammered home one constant theme: Bad things happen when you don’t pay attention to the signs around you.

Diving is an inherently dangerous individual activity. You have to pay close attention to your personal gear and gauges and you have to watch your surroundings and other divers for important signs. Over the years and many dives later, complacency set in and in one extremely anxious dive I placed myself in real danger because I’d ignored crucial, and obvious signs.

Freedom is like that. It is an inherently dangerous individual activity as well. Bad things happen when you don’t pay attention to the signs around you.

Today, this very moment, the warning signs are all flashing “Danger Ahead.” Free speech in the United States is in  peril, and with it the whole of the First Amendment to the Constitution sits in ultimate jeopardy:

“Congress shall make no law respecting an establishment of religion, or prohibiting the free exercise thereof; or abridging the freedom of speech, or of the press; or the right of the people peaceably to assemble, and to petition the Government for a redress of grievances.”

The attack on free speech, specifically, now has three critical component parts working together to restrict free speech as the first victory in upending the Bill of Rights.

First, there are the interconnected and well financed groups of the ultra-radical left that now have a virtual stranglehold on academia, the arts, the corporate media complex, and to a lesser extent on the mainline religious denominations and general business community. The radical left has been working publically for over one hundred years towards the eradication of Constitutional governance and free speech, and its patience is now bearing fruit.

Next are the corporate tech giants, such as Google, Facebook, Apple and a handful of others, who now collectively control nearly all the origination of social and cultural interaction and distribution through their major platforms and software, on the internet, in the media, and increasingly through the news business itself.

The U.S. tech giants have already capitulated to assisting in China’s internet restrictions, and of course have been enforcing so-called “hate speech” controls across much of Europe. (This past week, the President of the European Union, stated that the time had come for the EU to implement restrictions on the internet similar to those in China.)

There have been published rumblings from the tech giants that they will be looking at new attempts in the U.S. to self-censor “hate speech” and “hate groups,” in the absence of Federal regulations to do so, and an unsympathetic Administration in power.

Finally, are the two flailing political parties and their Congressional operations that have finally yielded any moral authority they may have had to the most radical and violent voices in the nation, seemingly anxious to discard the rule of law for the rule of convenience.

In April, the U.S. Senate passed Senate Resolution 118: “Condemning hate crime and any other form of racism, religious or ethnic bias, discrimination, incitement to violence, or animus targeting a minority in the United States.” The resolution was co-sponsored by Senator Marco Rubio (R-Fl).

Now an almost identical resolution, HR 257, co-sponsored by Northern Virginia Congresswomen, Barbara Comstock, who pretends to be a Republican although her voting record is worse than many liberal Democrats on “liberty” issues, is waiting in the House, were it could also resurface as actual legislation.

Well known attorney and commentator Judith Bergman notes in a June 20th article (here) for the Gatestone Institute that there are multiple dangers in these resolutions, and what would undoubtedly be forthcoming legislation.

First, all the activities mentioned in the resolutions are already crimes. Secondly, these resolutions were actually “[drafted by…] two Muslim organizations, EmgageUSA (formerly known as EmergeUSA) and the Muslim Public Affairs Council (MPAC).” Both organizations posted about their extensive involvement in the two resolutions and Ms. Bergman also provides an interesting background on both organizations and their ties with Muslim Brotherhood front groups and defending terrorist suspects.

More concerning is that both the Senate and the House version of this resolution, leave the door open for extensive interpretation and enormous mischief.

As an example, HR 257, Ms. Bergman notes, “Urges the establishment of an ‘interagency task force led by the Attorney General … on the development of effective strategies and efforts to detect and deter hate crime in order to protect minority communities.’”

This, of course, is precisely the way hate speech laws, which sound so innocent on the surface, have metastasized throughout much of Europe, Canada, and Australia – and why today, professional commentators, average citizens and even preachers who make harsh but truthful comments or state opinions about Islam, migrants flooding into Germany and elsewhere, homosexuals, same sex marriage, transgenderism, or other trendy cultural hot button issues are facing stiff “hate speech” fines or lawsuits, loss of employment, removal from social media, and in some cases actually jail time.

Here in the U.S. it is becoming blindingly apparent that freedom of speech and the free exercise of religion won’t be saved by the increasingly corrupted and self-serving permanent government that doesn’t support these rights to begin with, or politicians that are bought and sold by special interests on the radical left or the international corporate crowd.

Nor will these core freedoms be saved by the major “media and entertainment complex” or taxpayer dependent academia who long ago converted to a authoritarian brand of radical statism.

And certainly the feeble religious leaders of the mainline denominations will be of no help.

Along with others, I’ve written many times in the past on a distinct pattern deliberately put in place to dismantle the First Amendment (for my most recent articles, click here, here and here). But, even these concerns didn’t appreciate the audacity with which the anti-First Amendment crowd has moved, nor did many of us expect that the faux-conservatives in Congress would join the radical left on the wrong side of the First Amendment.

If individual citizens won’t defend the freedom to speak the truth and to practice their individual faith at any cost, what will they defend? If these central freedoms are lost, do any other freedoms even matter?

We are on our own. If the First Amendment stands, it will be because we save it, not because the “ruling class” wants it.