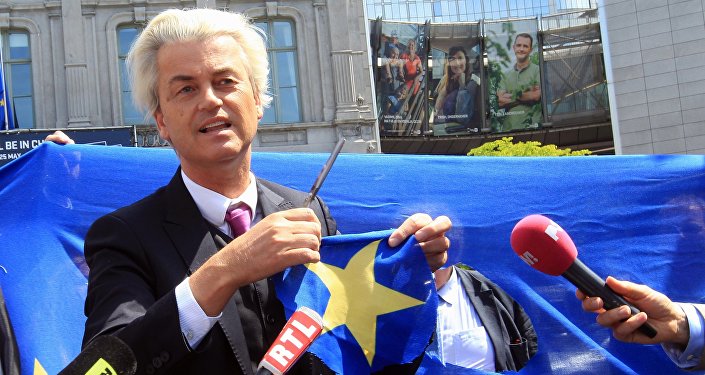 “The lights are going out all over Europe.”

The Dutch Parliamentarian and leader of the Party for Freedom, Geert Wilders (pictured above), first used that refrain during his vigorous defense of freedom of speech (read full text here) as he faced trial for “hate speech” and inciting racism in 2011, for comments he made about violent Moroccan immigrants in the Netherlands.

(Mr. Wilders was paraphrasing the famous quote of Sir Edward Grey as the First World War descended over Europe.)

Now, Mr. Wilders battles on with his third trial at The Hague, charged with similar “anti-Islamic” statements in 2014. Last month, he delivered a stinging closing argument to the court, describing “the stupidity” of the “hate crime” laws, the criminalization of genuine political debate and the attack on freedom of speech.

All across Europe the bureaucratic totalitarians, collectivist and socialists are waging war – not against an invading ideology, wholly incompatible with Western culture and political pluralism, and certainly not against the crony corporatist agreements made outside of public scrutiny – but against their own citizens.

These citizens are increasingly alarmed and vocal about the dismantling of European identity, a growing anxiety that multi-culturalism is merely a code word for submission, and a general foreboding that there is no place in the “new” global economy for the middle class.

The vote for Brexit in the United Kingdom was very much linked to this growing disquiet.

In virtually all of Europe and the UK, stifling free expression through the power of the “hate speech” laws, criminalizing “extreme” dissent, censoring news by government fiat, and commandeering the controls of social media seems to be the default position for stopping the popular uprising. Only when free speech is emasculated and hobbled can the “ruling class” of Europe feel secure again.

The U.S. is not that far behind.

In May, the social media giants, YouTube , Facebook , Twitter and Microsoft, were pressured into joining the European Union in combating “hate speech,” through a common code of conduct for each member nation, ambiguously described as “fighting racism and xenophobia.”

Its vagueness is its great danger.

Now the four media companies are agreeing to expand efforts, through the use of a common database, to remove “extremist” content. Not many would argue that denying Islamic terrorists a place to hide on the internet is a good thing. However, recent history suggests that the definition of what constitutes an “extremist” will quickly expand to include anyone not towing the correct political line.

The hapless President Obama, hopscotching across the globe seeking to highlight his relevance, met with besieged German Chancellor Angela Merkel in Berlin in late November. The President left America, still oblivious to the reasons for Mr. Trump’s stunning election victory; while Chancellor Markel is equally unaware that Europe is teetering into its own peasant revolt, and a rising tide of antipathy against the potentates of Brussels who direct the European Union and sanction the flood of refugees pouring into the continent.

It was striking that both leaders went out of their way during a joint news conference to assign the blame for voter anger to the lack of “real facts,” or on the voter’s reliance of fake facts found in “non-traditional formats.”

Free speech and the right to dissent are the real problems; not the elite political class.

President Obama was barely cogent: “If we are not serious about facts and what’s true and what’s not [and] if we can’t discriminate between serious arguments and propaganda, then we have problems.”

The President’s muddled thinking would comport, of course, with his frequent complaining about the uncontrolled nature of information, his zealotry for the so-called Fairness Doctrine and Net Neutrality rules, and his implication that there should be a “fact clearing” function for public information and news.

For her part, Chancellor Merkel was none too subtle that the internet required censorship, implying by comparison the need for the same kind of censorship employed by various European countries after the introduction of moveable type printing presses in the 1400’s!

“[The printing press] led to enormous transformational processes within individual societies and it took a while until societies learned to find the right kinds of policies to contain this, to manage and steer this.”

From the United Nations to every thug on the planet, censorship of speech seems to be on the “to do” list.

Former UN High Commissioner for Human Rights, Navi Pillay, summarized what may well be the “new world standard” for what, exactly, free speech is: “Defining the line that separates protected from unprotected speech is ultimately a decision that is best made after a thorough assessment of the circumstances of each case.”

And it certainly isn’t confined to political speech; the Christian faith and the Gospel itself are very much in the cross-hairs of the anti-free speech “hate crime” fanatics. In a Orwellian twist of reasoning, while a broad assortment of Islamic tyrants and dictators push for a global criminalization of any criticism of Islam, the Qur’an or Muhammad, Christian pastors are under siege by “hate laws,” jailed and fined in many European countries, and even in Canada, for preaching the Gospel and naming sin, sin. The U.S. is next on the list.

The new normal is the abnormal. This is demonstrated by the diabolical origins of “hate crime” legislation in the first place.

Danish contributor to the prestigious Hoover Institution, Jacob Mchangama, writes in his 2011 paper, The Sordid Origin of Hate Speech Laws, that the “introduction of hate-speech prohibitions into international law was championed in its heyday by the Soviet Union and allies. Their motive was readily apparent. The communist countries sought to exploit such laws to limit free speech.”

In the United States, the accelerating use of hate crime law, slowly being codified in the courts, is beginning to take its toll on free speech. One could even argue that the very concept of free speech, free association and dissent are endangered if not already extinct in American higher education.

Is Europe simply the foretaste?

The first stone or brick laid in constructing a building is the most important; every succeeding placement of stone or brick depends on that first one being accurately placed. Likewise, when building a society.

The United States, still unique in human history, placed its cornerstone in the form of the Constitution and the Bill of Rights. The processes of government in the Constitution and the God-ordained protection of individual liberties in the Bill of Rights are not subject to the whims of a majority vote, but only to a grueling process of amendment themselves.

That is, unless they are undone by lack of interest.

Every generation has had to resist the temptation to turn to mob-rule by the majority, or to yield individual liberty to those who detest its Author.

This generation is no different.

Freedom of speech, and its inseparable freedoms of religion, worship, association and dissent, were born with Gutenberg’s printing press and the whack of Martin Luther’s hammer at Wittenberg. At terrible cost, these core freedoms have traveled through the Reformation, the Enlightenment and into the New World.

Free speech represents the single greatest engine of human progress, prosperity and knowledge. It is God’s unique gift to His people.

The question is whether or not enough Europeans care enough to fight for that freedom alongside MP Wilders? Here in America, the hour is not too late. Will we defend what we have been given, or will we wait until we too have to fight?