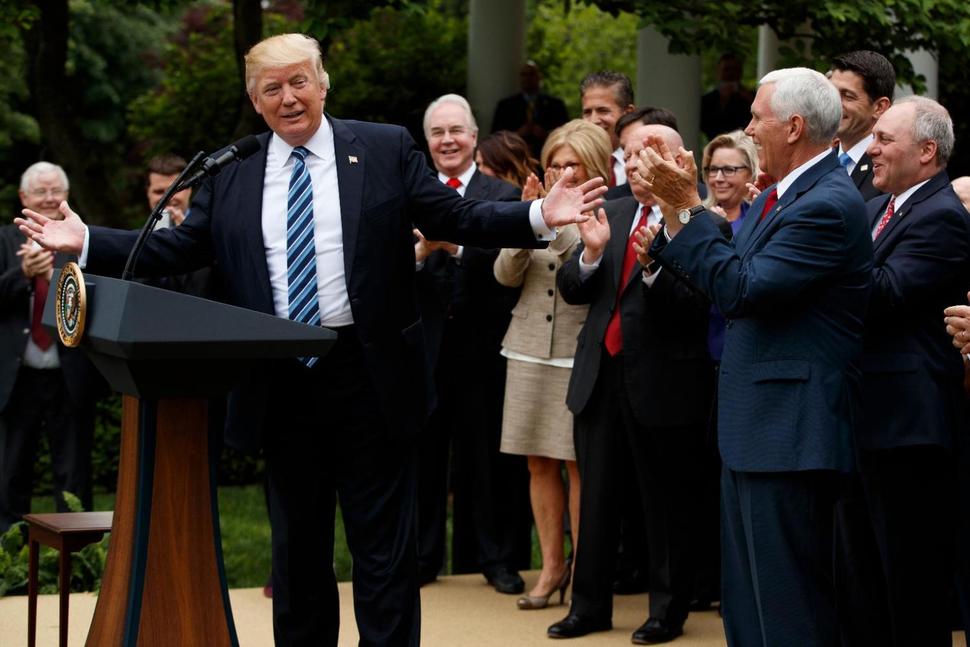 Freedom Caucus Sells Out on Trumpcare For Nothing

In what I am sure was a difficult vote to make for every single one of them, the House Freedom Caucus voted for the American Health Care Act (AHCA), also known as “Trumpcare” on Thursday. Not a single Democrat voted for the bill, and only 20 Republicans voted against it.

Immediately after the vote, GOP leadership and the White House began a victory lap, declaring they had finally delivered on their promise to repeal and replace Obamacare, even though the bill does no such thing.  Conservatives and HFC members took to the airwaves and social media to defend their hard fought concessions that really only amounted to punting any hard decisions to the states.  They went on about how this bill is far from perfect, but it was The Best Deal We Are Going To Get!TM  Boisterous Trump supporters who previously had railed against what they called Ryancare suddenly fell silent as HFC members bought in to the big lie.

Conservatives in the House caved in to pressure from Trump and the establishment and voted for government backed health care and brand new entitlements, and what are they going to get for their trouble?  NOTHING. That’s right. Upon hearing the news the House had finally passed their version of Trumpcare, establishment leaders in the Senate said, “thank you very much,” took the bill their colleagues in the House had fought over for so long…and dumped it in the garbage.

Senate leadership immediately told reporters they would not even vote on the house bill, preferring instead to start over from scratch and produce their own bill.  This will undoubtedly be far more to the left than what was produced in the House, meaning the negotiations between the House and Senate conference to reconcile the two bills will produce something most likely to the left of the original Trumpcare before the HFC won their “concessions.”  That little baby step towards the free market that everyone is saying we are getting thanks to the Freedom Caucus will go up in smoke.

Some people may ask why, if the Senate was not even going to consider the House version of the bill, was it even necessary to hold a vote in the House in the first place.  The are three reasons for that:

1. Break the House Conservatives’ spirit – Trump and the establishment needed to get Conservative House members on the record voting for their warmed-over Obamacare bill.  They needed to establish that first betrayal of principles early. Once you get someone to break and betray themselves and their cause, they are never really the same after that. They are far easier to break the next time, especially now that Trump and Ryan know what leverage to use against them.  This makes it much easier to get them to make the next betrayal.

2. Put pressure on Senate Conservatives – We all know that the Senate bill is going to be even worse than the House version.  The only way to stop that is if Conservative Senators like Ted Cruz, Rand Paul, and Mike Lee vote to kill the Senate version of Trumpcare. Unfortunately, we now have all but one of the nearly 40 member House Freedom Caucus signing on to an Obamacare repeal bill that does not repeal Obamacare.  Those votes will be used to put even more pressure on Cruz, Paul, and Lee to cave in and join their fellow conservatives in getting the Republican “win.”

3. Use the momentum to push through the final product –  Once they have a House Bill that doesn’t repeal Obamacare, and an even worse Senate bill that doesn’t repeal Obamacare, the House and Senate will merge the two bills into a progressive, big government mess that will then become “too big to fail.”  Pressure will be brought against Conservatives to once again “take one for the team.”  After all, how can they back down once they are “this close” to passing the final version? “You’ve already voted for it once,” they will be told.  “You might as well vote for it again.”

In the meantime, Trump and Republican members are doing everything they can to undermine our own party.  Mere hours after claiming to have repealed Obamacare, the President met with the Australian Prime Minister and praised him for having a better health care system than we do (Australia has a single-payer system).  Bernie Sanders quickly said, “thank you,” and promised to bring up his words on the Senate floor during the health care debate.  Also, after complaining bitterly about not having time to read through Obamacare before it was voted on, Freedom Caucus member Mark Meadows claimed that he “tried” to read Trumpcare, while Chris Cox simply admits he didn’t bother to read it at all.

While Trump and Republicans are bragging about repealing Obamacare, even though they didn’t, the Democrats are sending out fundraising letters claiming that Republicans just voted to kill everyone.  This will be their rallying cry to whip up their already frenzied base to a crescendo of crazy and aim them at the ballot box in November, with state races like the Governor’s race here in Virginia becoming exponentially more difficult thanks to Trumpcare punting all the tough decisions to the states (more on that in a future post).

I think Ben Shapiro really does a great job of summing up the result of the vote for Trumpcare in the House.

Freedom Caucus Sells Out on Trumpcare For Nothing was last modified: May 5th, 2017 by Mick Staton
Donald TrumpFreedom CaucusTrumpcare
42 comments