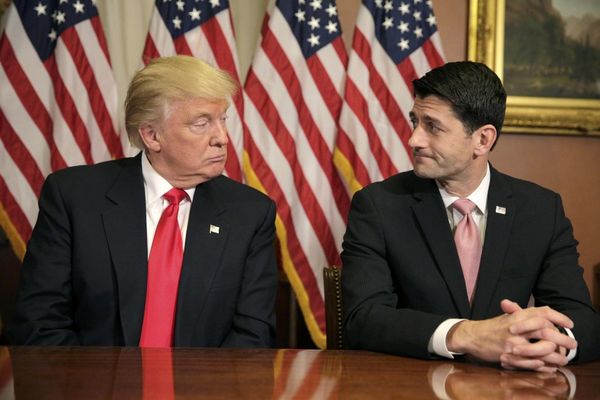 The House was not able to muster the necessary votes to pass the TrumpcareÂ bill today. Â  The President tried repeatedly to get House conservatives on board with his plan but he failed. Â There will be no vote today on the Trump-Ryan plan for health care.

Weâ€™re very confident that the bill will pass tomorrow morning,

As of this afternoon, there are 37 House members who are prepared to vote against the bill. Trump and Ryan can only afford to lose 22 members if the bill is to pass. Â So there are more than enough votes to defeat the bill.

If Trump cannot make enough concessions for conservative House members to vote for the bill it will go down as a major defeat for the President.

UPDATE: Â Virginia Republicans Dave Brat, Rob Wittman, and Tom Garrett all remain firmly opposed to the bill, despite tremendous pressure from leadership and even the President and Vice President themselves. Â We’re told that there have been a variety of threats made against them, including the launching of primary challenges. Â These stalwarts have remained true, however, and their fortitude is about to pay dividends.

I always thought Republican was the Freedom Caucus.

The real question is this. If we didn’t have to pay hundreds of billions each year in interest on the national debt to Wall St. banks AND Communist China, could we afford health insurance for our people like other countries? And, if you watched Fox News with Chris Wallace past Sunday, you know Trump has no plans to lower the deficit according to the WH budget director.

You see, a few years ago, the racket was this. The big banks borrowed money from the fed at an almost 0 percent interest rate. And, what did they do with the money they borrowed from the fed? Well, the big banks loaned it back at over 3% to our government.

Budget forecasts call for $30 Trillion, so no it doesn’t matter who is in the driver’s seat.

That the same number I am hearing.

Yes, they are going to ram thru some type of corruption based BS. Screw the s–t out of the poor and middle-class.

Glad Ryancare did not pass. Next item for the Freedom Caucus is for them to jettison Ryan as Speaker.

So, why under Obama was it not Pelosicare? Because you are wrong, it’s Trumpcare, or, it was Pelosicare, not Obamacare.

You can’t have it both ways.

Repeal Obamacare and Replace Ryan and any other Congressional Leader who can’t hack it. There are capable Leaders in Congress, as this fight has shown, time for them to get their chance.

Those of us who have campaigned on our own time and own dollar for years are sick and tired of being letdown by the GOP (particularly in D.C.). We want OUR agenda to be pushed forward, with the gusto and expediency that the dems seem to enjoy when they wield majority rule.

We owe those three conservative Congressmen so much gratitude.

Neither is the skinny one.

Congressman Wittman will not give in.