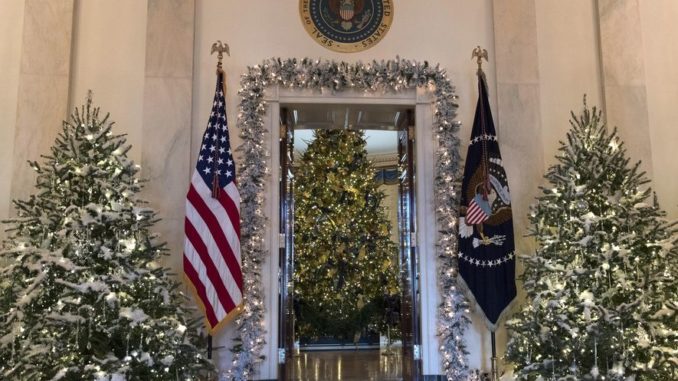 Friday Musings From The Swamp: Trump Base Revolts Over Wall

In fact, considering what happened this week, talk radio’s impact is bigger than ever in Trump World.

When the White House signaled on Wednesday that POTUS was inclined to sign the U.S. Senate’s Continuing Resolution (CR) with no wall funding, all hell broke loose with Trump’s base. It was a total revolt, the likes of which I’ve never seen.

And it all played out on talk radio, starting with my show at 6 a.m. on Thursday. The flames were fanned the prior day when Rush Limbaugh said the President got “less than nothing” in the negotiation, and then Ann Coulter doubled down in a blistering OP-ED on Breitbart. She called the President “gutless” for selling out his base and caving on the wall.

If you add up all of our emails, calls, texts and messages, it ran about 100-0: pissed off. Some of my most loyal Trump callers threatened to never vote for Trump again if he “sold out” on the wall. They wanted their President to stand and fight. We telegraphed the information to our contacts in the White House, and it only got more intense on talk radio shows across the country as the day wore on. By mid-day, Trump got the message. Fight for the wall now or lose and dispirit your most fervent supporters and kiss 2020 goodbye.

My initial concern was that without a House bill passed by the GOP caucus, a government shutdown was folly, as there was no end-game. The House bill with $5.7 billion for border security and partial wall funding gives Trump and his America First loyalists a fighting chance. Bravo to the Freedom Caucus for leading the charge and the 217 Republicans who voted for it.

The best line of the day goes to WH Deputy Press Sec. Hogan Gidley, who said on my radio show Friday: “Democrats want to keep the borders open and the government closed.”

Concerning Mexico’s pledge to keep migrants out of the U.S., Gidley had this gem: “What you have is a Mexican government that’s going to do more to protect our country from illegal immigration than the Democrat party. That right there should probably be the most shocking takeaway from this. We have a foreign power working to protect our citizenry more than one entire [U.S.] political party.

Jared Gets A Much-Needed Win

Special adviser to the President and first son-in-law Jared Kushner got a much-needed win this week with the passage of The First Step Act of 2018, the President’s signature prison reform bill. Kushner was the lead White House driver behind the legislation, which had failed to see the light of day in the last two administrations. Newt Gingrich first brought this to light in 1998.

This was a welcome win for Kushner, who can’t get away from his disastrous association with Saudi Crown Prince MBS fast enough.

A new status symbol has arrived in the swamp: The Trump White House Christmas party invitation. These coveted invites have defined the defacto pecking order of elites in D.C. For those who did not receive official WH invitations, prolonged bouts of depression and inferiority complexes are running amuck.

The bright side is, a new cottage industry has emerged in D.C. dealing with “SJT” (Snub Job Therapy).

For the selected party-goers, the next tier of swamp self-importance involves what Christmas Party you were invited to. Each one has a different status level. The lowest on the totem pole is about three weeks out and it comes on RNC letterhead. That’s the poor man’s gig, and normally goes to those deemed least important to carrying on humanity. The status ladder goes all the way to its apex, which culminates in the weekend before Christmas night party. That’s when you know you’ve arrived as a D.C. player.

Personally, I didn’t get an invitation this year. Good thing I have my cat, Sammy, who I converted to a service animal to get me through the emotional trauma of the whole humiliating ordeal.

Merry Christmas and Happy Holidays to everyone!

Friday Musings From The Swamp: Trump Base Revolts Over Wall was last modified: December 21st, 2018 by Guest Contributor John Fredericks