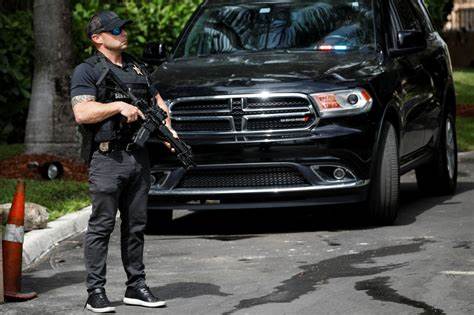 This week the Biden Administration made history when the FBI conducted a surprise raid on Mr. Trump’s private home in Mara Lago, Florida. It was the first time that a federal law-enforcement arm has ever made an armed investigatory raid on a former president’s private residence. The raid resulted in extraction of several boxes – now said to contain “classified” documents – from Mr. Trump’s study and from the home’s basement. Items extracted from Mrs. Trump’s wardrobe (if any) remain undisclosed.

News media organs are obsessing on the classified documents story, with speculation flying that this might be The Big One that finally puts Trump in the pokey. (“Gad! They might actually be nuclear weapons documents. Was he going to sell them to the Russkies? Is it true that he’s actually an Admiral in the Russian Navy? Yadda-yadda-yadda”)

The millions of Americans (including Yours Truly) who hold (or have held) federal security clearances during their careers know that ordinary citizens may not remove classified government documents from the locations where they are secured, unless proper security protocol is observed.

Failure to observe security protocol would be a violation – as when former Clinton national security advisor Sandy Berger took classified documents out of the National Archives by stuffing them in his pants and socks. (Hopefully, not in his underwear.) Of course, he was locked up for a long time when his actions were discovered. (No, wait! Nothing actually happened to him…)

But I digress. It is true that ordinary citizens may not take classified documents away from their secured locations. But the president is not an ordinary citizen. When in office he is:

With respect to document-classification, what the president says goes, even if lesser officials disagree. He is the Supreme Weenie of national security. He has complete executive-authority to classify documents, or to de-classify documents that were previously labeled “classified” by other government officials. And he may take such declassified documents with him, as part of his presidential papers, when he leaves office.

There is no possible scenario in which a lesser government official can credibly accuse a former president of violating the Espionage Act for having “classified” documents in his possession – as is now being suggested. Hysterical Media claims that Mr. Trump illegally took classified papers to his Mara Lago residence are either misstatements (at best) or deliberate lies (at worst). If he has any government documents at Mara Lago – whatever their previous status might have been – they are now no longer classified.

The dramatic FBI raid also raises the question of who, in Mr. Trump’s staff, would have known of such documents and their storage-locations. FBI agents executing the raid evidently knew exactly where to look. If Mr. Trump has a personal “weakness” that puts him at risk, perhaps it is putting too much trust in the integrity of his staff. Ronald Reagan always said, “Trust, but verify.” Unless I’m greatly mistaken, Mr. Trump is taking positive steps in that direction right now – possibly a little late, but better late than never.

In the midst of this brouhaha, Joe Biden has returned to his 2020 basement command-post – at least symbolically – and given his best Sgt. Schultz impression with claims that he “knew nothing” about the planned FBI raid. (“I know dere vas a ham-hock in here…”)

The Biden Administration might find it useful – perhaps even entertaining – to let Attorney General Garland run around acting like he is independent of the White House. But the idea that an Executive Branch agency might have more authority than the Chief Executive is more than patently absurd. It is dangerous nonsense. Of course this raid had presidential sanction. How dumb do they think Americans are? (Never mind, we know the answer.)

Meanwhile, Big Media romps on with the dramatic tale of the heroic FBI foiling the evil ex-president’s attempt to violate the Espionage Act. They recovered “classified” documents that Mr. Trump took with him when he left office. Were they secreted in his underwear? Or in the First Lady’s wardrobe? Was he going to peddle them to the Russkies? Or perhaps to the highest bidder on the World Spy Market? Thank heavens, Merrick Garland was there to act before it was too late! (Umm, why did he wait seventeen months to move on this? Well, never mind…)

If Editor Ben Bradley were still running The Washington Post, he would again be saying, “We haven’t had this much fun since Watergate.” It’s Big Media’s big day. Democrats’ too. (But I repeat myself.) Of course, it’s all rubbish, as even Mr. Trump’s political and media accusers must know. A willing judge, prosecutor and grand jury might proceed with an indictment, and even a trial, but the whole thing will certainly be struck down by the Supreme Court, according to legal experts.

That’s as may be, but the result doesn’t matter to Mr. Trump’s enemies. They believe they’ve struck political gold with the FBI’s raid and the classified documents story. It’s their October Surprise – even if it has occurred in August. They’ll be able to carry this circus on through the midterm elections, now just seven weeks away – and maybe right through to the 2024 election. Courts can never be hurried – especially when delay is politically useful.

Winston Churchill said, “A Lie goes halfway around the world before the Truth gets its boots on.” And Nazi Propaganda Minister Goebbels knew that substantial numbers of people will believe a big lie if it’s proclaimed loudly and often enough.

The great thing in this current situation – from Democrats’ perspective – is that a substantial bloc of voters will hear Big Media’s tale enough times to be convinced that Mr. Trump actually violated the Espionage Act. They don’t know diddly about presidential authority on security matters, so they’ll think he’s probably a spy. This is how it’s done in the Electronic Media Age.

Will the documents story perturb the midterms enough to let Democrats hang onto control of the Congress? Will it keep Good Old (befuddled) Joe in office in ‘24, or put a replacement Democrat in the White House? My Crystal Ball is busted, but we’ll soon find out.

Beyond the immediate effects of an FBI raid on a former president’s home and media-hyped tales of purloined “classified documents,” however, it’s indisputably clear that Democrats have changed the rules of the presidential “game.” Their treatment of Donald Trump – before, during, and after his tenure – signals to Republicans that any future president of their party can expect the same. The days of gentlemanly, cross-aisle respect are over. It’s all war, from now on.

More than that, Democrats have thrown down the gauntlet – challenging Republicans to show if they have the mettle to play by these new rules. If blue-blazer Republicans – long the nice party that turns the other cheek – don’t seize the cudgel and give Democrat presidents (and ex-presidents) the same strong treatment, they’ll be giving Democrats a free hand on this. It’s an ugly prospect, and not one I would choose, but these are dangerous times.

“Freedom is never more than one generation away from extinction. We didn’t pass it to our children in the bloodstream. It must be fought for, protected, and handed on for them to do the same, or one day we will spend our sunset years telling our children and our children’s children what it was once like in the United States, where men were free.” (Ronald Reagan)

“For if the trumpet give an uncertain sound, who shall prepare himself to the battle?” (I Cor. 14:8)

Were the FBI agents conducting the raids cleared for the handling of supposedly top secret material. If not, and the DOJ claims that this was active TS, then the agents should be arrested for mishandling classified documents.

A quibble, Mr. Zimmerman – the use of the police state against political enemies does not signal its future use against Republicans – only those who are not members of the Uni-party. GOP members from McConnell to McCarthy will not have their sleep disturbed.

It keeps getting better. In the past 12 hours we have learned:

1. Remember when Trump told us he hires only the best people? The National Archives learned a year ago that Trump had removed several boxes of Presidential documents from the White house, leading to months of discussion between the Archives and Trump’s best people. In January Trump’s people turned over to the Archives 15 boxes, some of which contained classified material. On June 3 Trump’s best people attorney stated, in a letter to DOJ, that no more Presidential material was at Mar-A-Lago. Ooooopssss.

2. DOJ has obtained 60 days of surveillance video from cameras throughout Mar-A-Lago. Now it turns out the video shows boxes being moved out of the area where the FBI found boxes of highly classified documents last week. Watch for another search warrant to be issued.

Meanwhile, for your reading enjoyment: “American Psychosis: A Historical Investigation of How The Republican Party Went Crazy,” by David Corn.

The unclassified documents from the Obama administration are at the official Obama Presidential Library in Hoffman Estates; classified material is in Maryland under NARA control.

Apparently, per news reports, not all of them. NSA apparently knows the situation.

is that what you think? Really?

> Winston Churchill said, “A Lie goes halfway around the world before the Truth gets its boots on.”
Definitely NOT Winston Churchill. The earliest form of that adage came from Jonathan Swift in 1710. Here is an interesting discussion of it: https://quoteinvestigator.com/2014/07/13/truth/