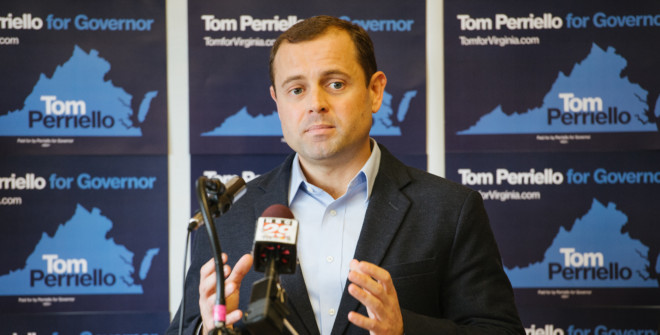 We can only imagine how the now infamous phone call from former Va. Democratic Congressman Tom Periello to Lt. Gov. Ralph Northamon Wednesday night went down. It likely went something like this:

Northam: Same to you! I’d love to have you come to my big fundraiser headlined by Governor McAuliffe on Saturday night! Can you make it?

Perriello: No Ralph, I’m busy. I have my own fundraiser scheduled. I’m running for governor.

Perriello: Uh, no Ralph. I’m running against you in June.

Regardless of whom you may support, Perriello and his team — starting with Democratic consultant Don Mark — brilliantly executed this political bomb.

It has to go down as one of the most effective non-announcements in Virginia political history.

First, it’s been the best-kept secret in Virginia politics. Knowing this landscape as I do, if a politico so much as goes to the bathroom one too many times, the state’s bevvy of bloggers manages to pick it up. Leaks are commonplace. Nothing is sacred.

So this announcement took the entire state’s insiders by surprise.

No one I talked to saw it coming.

Third, the former one-term U.S. House Rep. from Virginia’s 5thcongressional district does it a mere five days prior to the start of the 2017 Virginia General Assembly.

Northam, as Lt. governor, can’t fund-raise and he’s essentially campaign handcuffed for 60 days while he has to preside over the state senate, stuck in Richmond with gavel in hand.

Meanwhile, Perriello has two months of free reign where he can play short-term catch up.

This campaign launch should be taught at UVA’s Sorensen Institute for Political Leadership.

In fact, it should merit its own chapter in their textbook. We even have the title: “How to undermine the entire Democratic establishment, the DPV, their big donors and the incumbent governor in all one fell swoop” – by Tom Perriello.

PERRIELLO IS THE DARLING OF VIRGINIA PROGRESSIVES

Perriello presents a host of challenges for the one time inevitability of the Northam for governor juggernaut.

He is a darling of the Democrats’ progressive wing of the Party, as he stood heroically by President Barack Obama’s agenda during his one House term in Washington.

Throwing caution to the wind after ousting incumbent conservative icon Virgil Goode in the 2008 Obama election wave, Perriello backed Obama’s every policy initiative with fearless vigor while representing a historically Republican district in central and south side Virginia.

He never wavered, and became an Obama favorite.

As a result, Perriello was subsequently defeated by GOP challenger Robert Hurt in the Tea Party election of 2010, helping Republicans to take back control of the House.

Perriello is likely to energize the more progressive non-establishment wing of the Virginia Democratic Party.

They’ve been itching for a fight.

Now they have one.

While Bernie Sanders got pummeled by Hillary Clinton in the SuperTuesday Democrat primary last March, its hard to gauge how much of the center-left Democratic primary coalition vote will be locked in for Northam come June 13.

PERRIELLO IS NO ANEESH CHOPRA

Northam came from behind in the 2013 Democratic primary to knock off one-time team Obama Chief Technology Officer Aneesh Chopra, who served as an Assistant to the President and Associate Director for Technology in the West Wing.

But that was then and this is now.

Chopra turned out to be a weaker candidate than many of his progressive supporters had hoped. Sometimes standoffish, and not personally engaging, Chopra ran without name recognition and laid claim to no inherent base.

Perriello has none of these flaws. He has strengths in key areas where Chopra showed weakness.

The former state senator from the Eastern Shore and Norfolk also benefited in 2013 from some Republicans, Independents and moderates crossing over to vote in a Democratic primary for Northam – or against Chopra. The Republicans nominated their candidates by way of a statewide convention in May, so they had nothing going on in the June primary.

When the GOP nominated Bishop E.W. Jackson for LG, some Republicans who could not support Jackson saw Northam and as acceptable alternative, in lieu of Chopra.

I know this for a fact. I led “Republicans for Northam” in the 2013 June Democratic primary.

Northam will not have the luxury of those disaffected open primary voters this go around.

Republicans have a hotly contested primary election on the same day and they will be otherwise pre-occupied.

So Northam has to win with only Democrat primary voters.

He has raised a lot of money, and I’m told by sources close to Northam that their candidate has locked in the support of the entire Democratic General Assembly, as well as Governor Terry McAuliffe and his political big money friends.

One member of the Democratic senate caucus leadership who requested anonymity to speak freely, blasted the upstart candidate. “I guess Clinton lost so Tom needs a job. Ralph has locked up our caucus and our big donors. I don’t see the votes for the guy.”

Virginia Senate Minority Leader Dick Saslaw (D-Fairfax) said the Perriello candidacy was going nowhere. “Perriello couldn’t even hold his own Congressional district and both his state senator and his delegate who know him are supporting Ralph Northam.”

Northam is the early chalk for sure, but Perriello is not to be taken lightly.

This has the trappings of a dogfight.

Congressman Morgan Griffith: (The Holman Rule) “Let’s Put The Power Back In Congress”” ,,

Mr. Fredricks,
I stated on one of your stories here on TBE ; If the Republicans don’t nominate Trump I will fish the New River in Nov 2016.
You responded ; you will be voting to save our country. ( I fully understood your viewpoint ).

Now this gubernatorial Election is extremely important not only to Virginia but the rest of the country I fully support Ralph Northam Democrat.

Do you know of any Republican gubernatorial candidates that understand payroll fraud, unlicensed Contracting and the employment of illegal aliens in Virginias’ publicly subsidized shadow economy?

Obama is gone!
Clinton is gone!
McAuliffe is gone!

Illegal Immigration is on the way out according to Republican President elect Trump.
Can I as a legal business owner / employer count on Virginia Republicans to continue to to allow the illegal employment of illegal aliens in Virginias Construction Industry?

In a nutshell what do Va. Republicans have for leadership ?

Yea we have a previous Army Ranger, NARC officer for LT.Governor.
How would he use his previous job experience to combat the Va.documentated importation of drugs and gang members into our community through the complicit administrative loopholes that foster it?

Clinton would not answer the phone at 1 am when Behngazi was burning.
Which Va.Republican will answer the phone in Va.? Or will they let it continue to burn.
http:// watchdog.org/202012/subcontractors-shadow-economy

[…] Connelly will not endorse Northam in deference to former Congressman Tom Perriello who recently entered the race for Governor.  […]

Voted for him, twice.

Even if Northam has the establishment endorsements, the primary voters in places like Arlington and Fairfax Counties are big government fans who could be drawn to Perriello based on his very liberal record. I’d agree that odds favor Northam to win the nomination, but I would not be stunned at all if Perriello pulls off an upset with the larger jurisdiction voters in NOVA and Richmond.

“I know this for a fact. I led “Republicans for Northam” in the 2013 June Democratic primary.”

When and where was this mitigated?

Who were the other Republicans in your group?

He is just jumping in to draw attention to Ralph and the Dems.

In comparison to the Left-Wing kooks and creeps I grew up with in NYC, Democrats in Virginia are a relatively likeable, pragmatic bunch. The majority must know that even if this starry-eyed upstart did manage to win the governorship, his progressive agenda would be cut short by the GOP dominated House of Delegates. Northam is the man they view as to “get things done.”

He is such a creepy man.

Here is Tom Perriello’s problem; the Democratic Party is dominated by a Connolly-McAuliffe-Scott alliance that covers Northern Virginia, African-Americans and the business community. There is very little oxygen left, and furthermore Democrats have been so successful in Virginia I’m not sure there is much of an appetite for a candidate screaming and yelling about a “rigged system.” Whatever rogue elements there are in DPVA, I don’t think its enough of a base to defeat that machine.