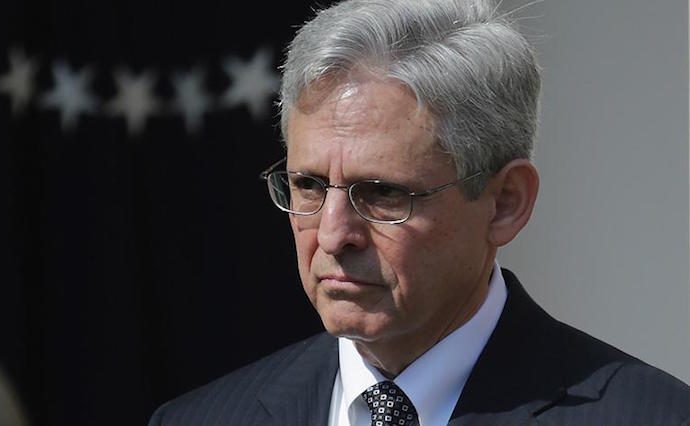 Garland: a Judge for the Political Class

In an election year in which three of the four main presidential contenders from the two political parties at least purport to be running against the Washington establishment, President Obama has nominated a quintessential political establishment judge for the Supreme Court.

Judge Merrick Garland is not the radical judicial activist many conservatives thought President Obama might nominate in his lame duck days as a parting and lasting shot to fulfill his contra-constitutional transformation of America. The nomination of Judge Garland is instead a cleverer and subtler attempt to advance the progressive agenda that relies on the extra-constitutional administrative political class now governing and deeply infiltrating American private life, property rights, business, education and even religious beliefs from Washington.

A Bill Clinton appointee to the D.C. Circuit Court, Judge Garland has the impressive credentials to woo and perhaps seduce many establishment Republicans in the Senate for confirmation. A Harvard Law School graduate who clerked for liberal Justice William Brennan, he was an Assistant U.S. Attorney and later a Deputy Assistant Attorney General in the Criminal Division at the Department of Justice. When he was not working in government, he taught law at Harvard, and did a stint at the consummate Washington law firm Arnold & Porter. He is the judicial gold standard for the Washington establishment.

Judge Garland would not fit what New York Times Supreme Court journalist Adam Liptak recently noted about what the late Justice Antonin Scalia may have hinted in his dissent in the 2015 gay marriage case about his successor for a more diverse Supreme Court: One not from Harvard or Yale, and not with the â€œpredominant attitude of tall-building lawyers with respect to the questions presented in these cases.â€

Judge Garland is being praised by establishment liberals as a â€œpopular centrist.â€ This means to imply he is someone who claims no hard ideology while in fact having one, or what I call a â€œmid-eologue.â€

Through the lenses of many on the left, especially those in the media, a conservative jurist is one who sides more frequently with corporations and the police â€“ regardless of the process by which they reached their outcomes. The fact that former prosecutor Judge Garland has been known to side with the police, although frequently ruling against corporations, makes him a centrist in the eyes of the results-oriented liberal press.

â€œGarlandâ€™s career has been defined by deference to decisions by administrative agencies.Â  During oral arguments in Americans for Safe Access v. DEA, Garland asked, â€˜Donâ€™t we have to defer to the agency? Weâ€™re not scientists. They are.â€™â€

Under the statist approach of progressives, the constitutional rule of law has been transplanted by the rule of government â€œexperts,â€ i.e., unelected bureaucrats within the alphabet-soup named administrative agencies, whose mistakes, corruption and lawlessness are more-and-more front page news, at least in the conservative media.

These â€œexpertsâ€ are part of the progressive transformation of American government that began long before Barack Obama was elected president. They are the hallmark of the Washington political establishment whose motto seems to be, â€œLet our bureaucrats decide.â€ Mr. Obama has attempted to take this transformation a few steps further through an executive branch that is more completely detached from the Constitution and its legal chains on government.

Judge Garlandâ€™s deference to administrative agencies was on display in his 2009 dissent in FedEx Home Delivery v. National Labor Relations Board, a case about whether drivers were independent contractors or employees subject to unionization. The corporation â€“ represented by Ted Cruz â€“ won, and the government lost despite having â€œhome court advantageâ€ in the D.C. Circuit and support of an amicus brief filed by the Teamsters.

In dissent, Judge Garland wrote, â€œUntil the Supreme Court or the [NLRB] tells us differently, we must continue to apply the multi-factor test set forth by the Supreme Court and applied by the [NLRB].â€ Courtsâ€™ deferring to a superior court is sound jurisprudence. Judges believing they are bound by the policies of unelected bureaucrats, however, is a chilling degradation of the constitutional rule of law over government.

Judge Garland is not to blame for developing this rigid statist ideology among judges known as the Chevron doctrine. It is based in the1984 opinion by liberal Justice John Paul Stevens in Chevron, U.S.A., Inc. v. Natural Resources Defense Council. Critics of this doctrine, whose ranks are growing thanks in part to the Federalist Society and the Heritage Foundation, believe it creates â€œan unaccountable fourth branch of governmentâ€ that James Madison would have described as the â€œvery definition of tyrannyâ€ for exercising the three fundamental powers of government in one body when they were intended to be exercised separately.

The administrative state is â€œLibertyâ€™s Nemesisâ€ according to various scholars, and the legality of its expansion is shredded by Columbia Law Professor Philip Hamburger in a superbly written book, Is Administrative Law Unlawful?

While liberals characterize judges who side with corporations and law enforcement as ideologically conservative, pro-government judges would seem every bit as ideological. Judge Garland is a fine and brilliant man by all accounts. His nomination, when Americans increasingly view government as corrupt and trust in the courts is at or near record lows, nevertheless underscores the agenda of President Obama. How the Senate responds will tell us a lot about whether they understand why so many Americans are fed up with the political class.

No. just a judge who has class.

By the way, as one of the resident Jewish posters here, I noticed that Garland is Jewish. That makes six out of the last eight nominations made to the Supreme Court by Democratic presidents have been Jewish. I would say if big Jewish donors have been donating these millions in order to buy influence, then they have gotten their money’s worth. Some of you don’t believe me? Well, let’s walk through history going all the way back to President Kennedy. The nominees have been: Goldberg (Jewish), Fortas (Jewish), Marshall (Episcopalian), Ginzberg (Jewish), Breyer (Jewish), Kagan (Jewish), Sotomayor (Catholic), and now Garland (Jewish). That is a 75% batting average for a group that is less than 2% of the population. I have always known that my fellow Ashkenazim were smart, but are they the only ones qualified to sit on the Supreme Court? Evidently Democratic presidents think so.

Why do they always cave on SCOTUS appointments? Over and over again, the Pubs show that they are both the stupid party and the party of invertebrates. There is nothing to be gained by confirming him, and much to be lost. Dress him up however you like, and at best he is a Souter/Warren/Kennedy. Once he dons the robe, there will be no going back.

We need to end the Harvard/Yale duopoly on SCOTUS. There are plenty of qualified jurists from other law schools.

So you’re objection to Garland is he adheres to stare decisis? I’m not a huge fan of the guy, but if I were going to criticize him I would choose a line of attack that doesn’t involve adhering to SCOTUS precedent (specifically the Chevron framework you’re referring to in the article).

Well, if he does not get on the court, when we control both the Senate and the presidency in 2017, I hope President Hillary picks a fire eating, card Carrying Marxist to the US Supreme Court. Garland is the best you are going to get. The far left is already bitching about him. What would be the easiest way to appease them? See above.

Hillary is going to be indicted, you damn fool!

Get real, bud. Look at all the other Clinton family indictments vs. the number of accusations. You got him for lying about a Blow Job. You have never touched her. She is smarter and more controlled than him. Give up.

You get real! There is something called the law and security regulations. She violated them. And this, lassie, ain’t lying about a blow job or engaging in some shady real estate deal. This is a total, reckless, wanton disregard for security violations and the law. And shame on you for pooh poohing this. This is SERIOUS. But then again, you Democrats (e.g. John Deutsch and Sandy Berger) have offered ample proof that you cannot be trusted with our nation’s most highly held secrets. And just about every person who has handled classification information knows what I am talking about here. If I did what she did, I’d be in jail.

Regardless of your name calling and wringing of hands, stating the obvious “she’s not getting indicted”, doesn’t really speak to party affiliation.

You are welcome to cling to your belief and justify it however you see fit but, she’s not getting indicted.

It spoke to my party affiliation. Stay cool and enjoy the spring !!!

Thank you Sbn but I am a yellow dog Democrat. As for mr, Jaws, sadly, the things that Hillary did wrong that are possibly criminal will never be in court because A: The public could care less as a whole and B. who wants to ruin their Federal Prosecutor career by going after their next boss. Political activists have to realize that 98 to 99 percent of the population does not give 2 shits about the minutiae of political plotting and scheming. We care, most people don’t. Yes we are VERY hungry for power, just like you and whether we are corrupt depends on whether our own people prosecute us. If you are gonna play, play with the hand you are dealt. Your whining equals nothing and next to no one cares.

You really don’t need to argue with any appointment to the judiciary by Obama. We have eight years of evidence as to what this man and his supporters will choose. Also, anyone with a tinge of brain power knows how burdensome, costly, bathed in fraud these bureaucracies have been. I personally have endured costs and decisions that are so insane few would believe it. I have to wonder is this judge Garland this stupid or is this just a game to increase the governments power over the citizenry. Either way we don’t want this man selected to the Supreme Court. I wonder do we have enough Republicans that have a backbone, intelligence and character to vote any Obama choice down.