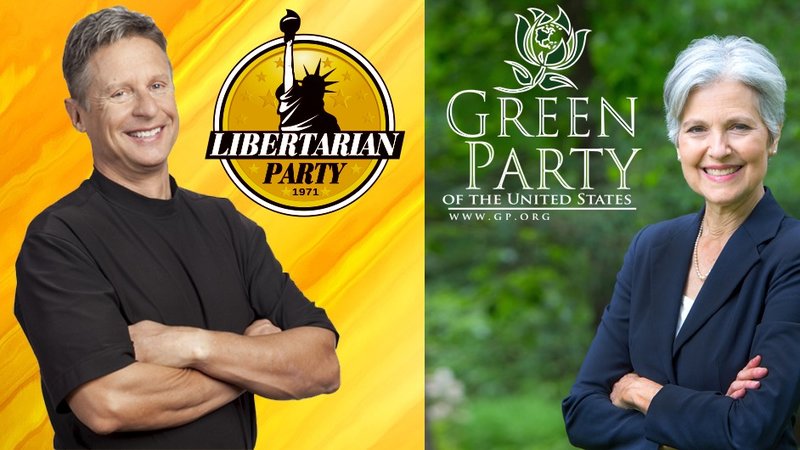 Libertarian candidate Gary Johnson, Green Party candidate Jill Stein and Independent Evan McMullin have all qualified for the Virginia ballot.  To qualify to be on Virginia’s ballot candidates must have petitions signed by 5,000 voters with at least 200 from each Congressional district. Virginia Department of elections announced on Friday that these candidates have qualified to be on the ballot.

The order of candidates on the ballot November 8th will be Clinton, Trump, Johnson, Stein, and McMullin.

Evan McMullen is a Republican running as an Independent. More about McMullen here.

Any vote cast for anyone other than the Republican nominee, is a vote for the Clinton Crime Family! Read “The Clintons’War on Women” for the details of their long criminal history.

Real irony can be found in an election when voters first resign themselves to one of the two most disliked candidates ever, and regard other options with hostility.

No, that is reality in this high stakes election. There is only one choice that will increase liberty or decrease liberty. I pray you will not be successful in your efforts in enabling Team Hillary. Choices made to decrease liberty deserve hostility.

Reality, as in proof. What do you cite as proof that only one choice of Hillary’s opponents can win.
Hostility — okay, I’m quaking in my boots that you might post a meme. Now, can you show some fact behind your assertion? Given the high stakes of the election, that shouldnt be too much to ask.

By the way, just so you know. Evan McMullin is portrayed as being a conservative, but he is a member of the Council on Foreign Relations. This isn’t mentioned in his bio.

How does his membership on CFR make him less conservative?

The CFR is comprised of the elite of the globalists who are dedicated to the destruction of American sovereignty and establishment of the New World Order. It is very select and they only accept the most dedicated and influential although those people may present themselves as conservative to the public in order to gain support..

Okay so I like to think I keep up with the news, and I know a few guys who have been CFR fellows, but I must have missed the memo. What brought you to the conclusion that CFR is “dedicated to the destruction of American sovereignty and establishment of the New World Order”?

I learned about the CFR by reading about them. You can go to
http://www.thenewamerican.com/component/search/?searchword=cfr&searchphrase=all&Itemid=619

A Republican or Democrat will win in November. Include as fact Mr. Johnson’ and libertarian past performance and results in elections.

If Trump wins, you will have a chance for future political activities that matter, if Team Hillary prevails, we will lose political relevancy in our lifetime.

I cannot help you see political reality if you will not look.

And I can’t help if you don’t know the difference between assertion and substantiation.

Well thanks for trying.

Sigh. I guess we will see your Libertarian carousel of renewal come November.

At least we’ll have another go for the Trump re-election in 2020.

You probably ought to worry less about snide commentary and more about why a record low 53% of GOP voters feel a candidate is running who will make a good president, and only 22% of Republicans feel the election process is working like it should.
If you can’t take any meaning from those numbers, let me help: right now, only the Trump-Jugend are smack talking, because all indications point to GOP voters abandoning Trump or abandoning voting all together. Was it the candidate or the charm offensive by people like you? Who knows and who cares? This mess is your doing and the doing of those like you.
http://www.gallup.com/opinion/polling-matters/195311/record-low-gop-candidate-good-president.aspx?g_source=ELECTION_2016&g_medium=topic&g_campaign=tiles

That is just completely made-up nonsense. You’re still using the old Democrat talking points from July. The polls show Trump rising throughout August, and as of the three polls released today, one shows Trump leading and another shows him tied. I wonder how Trump is managing to gain in the polls if GOP voters are abandoning him as you claim.

I already read the link. It didn’t say all indications point to GOP voters abandoning Trump. It says some voters don’t like Trump and they may not vote for him.

The majority of Republicans are supporting Trump. There is no way Trump would be polling this well otherwise.

It seems to me that the nevers are dwindling even more rapidly now, as it becomes clearer every day that it will be a close race; every vote will be needed to defeat Clinton. I know it will be tough for you to put your emotions aside, but I still have hope that good reasoning will ultimately prevail even in your case.

I don’t worry about snide commentary, I wallow in it!

I’m certainly not trying to convince the ‘stuck on stupid’ faction of anything other than the GOP no longer is a safe space for them.

Donald Trump is the standard bearer for our party, if you want in on our new alt-GOP, you’re either with us or agin’ us.

Aside from that, your opinion still matters to us, please participate in our open primaries. Thank you for your interest.

The Constitution Party seems to be falling apart.

Yes, it’s hard to be a third party. More than ever before, most of us will bite the bullet and vote against someone, rather than for someone.

Or it could be that the voters prefer even a Trump to wasting a vote.

That’s because all of the good people are wasting their talents in the GOP, let’s show them and all head for the constitutionalists!

Ugggh….how did that McMullen clown get on the ballot? Yay…splitting the vote even further.

I disagree with the assertion that he is a “conservative”. He’s a moderate republican squish…the establishment pick.

Really? The establishment likes him? I can’t imagine he’ll get more than a few hundred votes.

Egghead McMuffin is the neo-con candidate that was recruited by Bill Kristol’s NeverTrump clown show.

He’ll get some of the other DC rent seekers to vote for him, but that will be it.

His prior job as a Hill staffer was to convince GOP House members that the US needs to invade Syria to force a regime change. Yikes!

This guy was the NR writer??

That was David French. French dropped out within a couple days of Bill Kristol’s attempt to recruit him.

After that, Kristol and his NeverTrump neo-con buddy, Rick Wilson, frantically canvassed congressional staffers to find someone else.

But hey, I guess they succeeded (in their minds) since they found someone who thinks a repeat of Iraq in Syria is a good idea.

Ya gotta wonder why the nevers worked so hard to elect Republicans, or worked equally hard to defeat Obama and the democrats… Almost as if they benefit in some way….

The long summer of George continues.