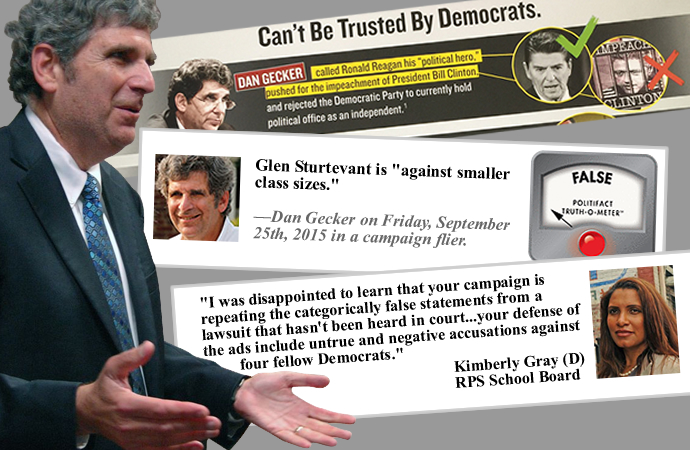 As the campaign for the State Senate began, I was urged by friends to keep an open mind on Dan Gecker, who they told me was a moderate who had served Chesterfield well.Â  I was willing to do that, believing that party identity matters just a little less on the state level than national politics.Â  But even before Gecker had won his primary, I began to have my doubts about his moderation and character as he campaigned on falsehoods.Â  When his campaign went negative and false about 5 seconds after the primary, Dan Gecker closed the doors to my vote on himself.

Let’s look at the many falsehoods that have turned this independent Right for this campaign.

On September 5, Gecker attempted (and fizzled) to open a front in the so-called war on women, posting an essay by his daughter Alex on his website, and posting graphics on his Facebook page that claim Gecker supports â€œequal pay for equal work,â€ implying that Virginia women are not paid equally to men. PolitiFact national has already discredited this Democrat standard when no less than President Obama used it.

And thatâ€™s my problem. Anyone can make an honest mistake, but when Dan Gecker repeats claims that have been labeled false since at least 2012, heâ€™s simply lying and pandering, and thatâ€™s a problem. As an economics major from Princeton, his daughter knows better, otherwise dad wasted a lot of tuition.

The fact of the matter is that when you take every womanâ€™s earnings and compare them to every manâ€™s earnings, women do average less than men. But as the Federal Reserve, Bureau of Labor Statistics, Forbes, and Huffington Post have all explained, this gap is not due to discrimination. Women average less earnings because, on average, women choose to earn degrees and enter fields that are less lucrative than men, work less hours than men, have less job experience than men, and on the whole tend to prioritize fulfillment over pay more than men do.

Empowered women are able to make these choices about their own lives because of the vital successes of feminism. When these factors are controlled for, in some industries women make more than men, and on average the gap shrinks to 5%. Dan Gecker has made no specific proposals to close the real 5Â¢ wage gap; gender-based discrimination is already illegal. Dan Gecker cannot close Virginiaâ€™s average .79:1 wage gap; it exists due to the choices women are making for themselves. He already knows that.

Geckerâ€™s early false attack on Sturtevant came in the form of ads and mailers stating that he had â€œvoted against a budget that reduces class sizes,â€ noting that he was the sole vote against that budget. Education is a bread-and-butter issue in any local election, and both Gecker and Sturtevant claim strong records on the issue. For a school board member to vote against smaller class sizes would, of course, be quite bad.

But the fact of the matter is that Sturtevant voted against the budget Gecker cited because he voted for a budget that gave teachers a larger pay increase than the one that passed, and his opposition had nothing to do with class sizes. Sturtevant voted for a 2% pay increase, then voted against the budget that passed because it increased teachersâ€™ working year and only paid them at scale for the new days.

PolitiFact weighed in on the issue and rated Geckerâ€™s claims false, specifically noting that the RTD article Geckerâ€™s ads point to disproves the claims he made.

If at first you don’t succeed, lie, lie again.Â  Gecker has continued to hammer on the education issue: to date, I have received at least seven mailers from the Gecker campaign that focus on the lawsuit filed against the RPS School Board surrounding the closure and rezoning of some schools. The mailers claim that â€œGlen Sturtevant is being sued for holding secret meetingsâ€ in the run-up to the rezoning that was eventually passed by the board as a whole, and implies that he canâ€™t be trusted.

But Democrat RPS Board member Kimberly Gray has gone public to set Gecker straight. Gray notes that the lawsuit is against the board as a whole, not just Sturtevant, and that the allegations of the suit are made by a â€œquestionable plaintiff.â€ Gray attempted to speak with Gecker about this untrue ad, but was ignored by him, resulting in a public letter. Grayâ€™s letter to Gecker reads in part:

Grayâ€™s criticisms not only highlight Geckerâ€™s continual problem with simply telling the truth, but echo Democratic primary accusations from opponent Emily Francis that Gecker has hijacked the party in order to gain access to the Senate; liberal news outlet The Daily Kos labeled Gecker a â€œDINOâ€ (Democrat in name only), but, like any good rag, now endorses him. Perhaps thatâ€™s why he has no problem ignoring Grayâ€™s correspondence and painting RPS Democrats with the same brush heâ€™s using on Sturtevant. Again, Gecker has a character problem.

Gecker is a Race Baiter

If anything, all these false, negative attack ads scream desperation to me. But thereâ€™s desperate and thereâ€™s despicable. This week, I was shocked to find that Gecker for Senate had approved two advertisements from Everytown for Gun Safety, not just the one attack ad that has already earned the disdain of the Richmond Times-Dispatch and factored in the RTDâ€™s endorsement of Sturtevant.

The Washington Post reports that Everytown for Gun Safety and Dan Gecker for Senate have planned a second commercial which piggybacks on Geckerâ€™s false RPS lawsuit claims to essentially accuse Sturtevant, the father (like Gecker) of adopted African-American children, of being a racist:

But it turns out that Everytown also intended to run a second TV ad. This ad mostly attacks Sturtevant on non-gun issues. It uses allegations from a lawsuit and employs racial code words whose meanings are well-known in Richmond politics.

The Post cuts right to the heart of Geckerâ€™s planned race baiting:

So why would the second ad pivot from guns to school zoning? Because the African American vote is thought to be key to winning the 10th Districtâ€¦And a Democratic-led Senate would be expected to be friendlier to gun regulations.

This cynicism speaks for itself, and speaks volumes about the character of Dan Gecker and those who bankroll him.

Gecker is Wrong for District 10

I said at the beginning that I went into this race open-minded. Part of my willingness to consider Gecker was the word of close friends, part of it was my unfamiliarity with Sturtevant. I believe that, had Gecker been the moderate I was promised, and had Gecker run an honest campaign, there is a reality where I might have voted for him. I do believe there are Democrats that could earn my vote on the right issues.

But Dan Gecker is not that Democrat. He is a man who will apparently leave no lie untold, who will leave no special interest dollar on the table, who will stoop to the most base accusations to get a seat in the Senate. A man like that does not deserve to represent District 10, and I cannot vote for a man like that.

Caleb Greene is a resident of Bon Air, VA. He is a 2014 graduate of VCU with a BA in History, and winner of the school's Alden Bigelow, Jr. Award for writing. A cultural libertarian, he is a reader of Nock, Bastiat, and Christina Hoff-Sommers, and not affiliated with any political party.