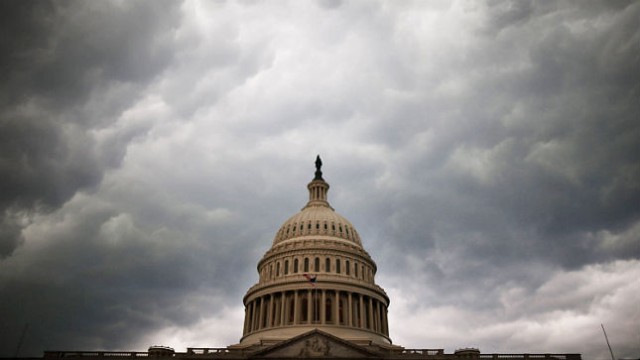 A storm over our Congress (Getty Images)

Gender Republican Identity Disorder: The Republican Establishment Is Not Fit To Govern

World Net Daily and other organizations reported that during the Obama Administration, both the House and the Senate voted over 50 times to repeal Obamacare. Since each chamber is squarely in the hands of the “Establishment” Republicans, those bills passed easily.

And they easily passed because everybody knew that Obama would veto them.

Today those same repeal bills are NOT offered up for votes. Why? Because the Republican Establishment leaders know that President Trump will sign it.

The military healthcare system (called Tricare) has very cut and dry rules for elective surgeries. According to Military.com report, elective surgeries that aren’t medically necessary “are not covered, even if your physician agrees with you.” Only “medically necessary” surgeries are covered. And, while the prestigious medical center at John Hopkins has stopped performing “sex-reassignment surgery,” the severely identity disordered Republicans want your tax payer dollars to continue paying for them.

More symptoms of Republican Identity Disorder become visible by the Budget. Speaker Paul Ryan was touted in his “non-speaker years” to be a budget hawk. In a 2011 meeting at the Heritage Foundation, I heard Ryan speak on the importance of “saving the American Idea” by reigning in the deficit and cutting the budget. He recognized that there is only so much money to go around. Ryan said, “As a practical matter, when you try to chase ever-higher spending with ever-higher tax increases, you eventually run into a brick wall of math.” Correct, Sir. Mathematics is a non-partisan reality. You can only borrow from the next column for so long, before you run out of columns! Well, Mr. Speaker, the American check book has run out of columns to borrow from.

Ryan keeps using continuing resolutions to create a manufactured budget crisis. He could simply return to regular order, pass a budget and send it to the President. Instead, Ryan makes a mockery of good governance with his sickly RID support-group.

We, The People, elected Republican majorities in the House and Senate and elected a Republican President. Politically, that’s as good as it gets. The people sent politicians who self-identified as Republicans and who claimed to be Conservative, to defund and repeal Obamacare and to fix our Nation’s problems with fewer regulations and less government. We are sick and tired of politicians saying one thing to get elected, then after they’re re-elected, they contract RID and vote differently.

Here’s the treatment plan. Inoculate politicians against RID. Drain the swamp infested by RID-carrying parasites. Put on principled armor and fight with courage for our liberties and freedoms. Fight for the Constitution.

If politicians think they can pacify those who voted them into power by doing what Democrats do, then they’re infected with RID and have become swamp creatures.

To paraphrase what William F Buckley once said, “I would rather be governed by the first 2,000 people in the Boston telephone book than by those infected with RID.”

We need to get rid of swamp creatures infected with RID, if we want to save the American Idea!